Home/1980s, 1990s, 2000s, 2010s, Exhibitions, SOAS in the world, The World at SOAS, Uncategorized/The founding and development of the History of Art and Archaeology Department

by the first official member of the Department, Emeritus Professor Elizabeth H Moore, who retired in July 2015.

My connections to SOAS began in 1981 as a doctoral student with the late Professor Anthony Christie. In 1986, after completing my PhD at the Institute of Archaeology under the wise supervision of Dr Ian Glover, I became a Research Associate with the Centre of South East Asian Studies (CSEAS).

The late Professor Ralph Smith warmly encouraged me in a project to rescue a World War II collection of aerial photographs, now housed at SOAS as the Williams-Hunt Collection and available online as the ‘Geo-Spatial Digital Archive for Southeast Asia’ through collaboration with Thai and Japanese universities. This project continues through 2015 to update the inventory in a collaborative outreach project between the Digital Library Projects section of the SOAS Library and the Center for Southeast Asian Studies at Kyoto University.

My contract with SOAS began as a Sir Peter Parker training fellow, an initiative to support scholarship on endangered disciplines, in 1988 with the South East Asia Department. At my leaving party in May 2015, Professor John Picton, specialist in the Arts of Africa, told me I was officially the first member of the yet-to-be founded Art and Archaeology (A&A) Department in 1990. John led us from scattered offices in the Main Phillips Building to a dedicated area at 30 Russell Square, and then with the inauguration of the Brunei Block and Art Gallery in 1995, we became the first academic and to date only department to be housed in the new building planned as a centre for the arts. 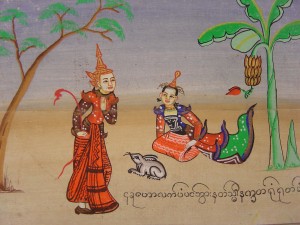 As a department we worked hard to integrate the Brunei Gallery more fully into the academic fabric of SOAS. Professor Anna Contadini and I championed the use of the School’s remarkable art collection in our teaching, linking the Gallery’s exhibitions to students’ courses wherever possible. This culminated in the “Treasures of SOAS” project to explore and catalogue the objects held by the School. Some 120 of these objects were exhibited in the Gallery during the Objects of Instruction exhibition in 2007, accompanied by a catalogue for which I wrote a chapter introducing the School’s unique collection of Southeast Asian objects. Another highlight was the inauguration of the Foyle Special Collections Gallery within the Brunei Gallery, as a permanent space showcasing parts of SOAS’s collection, on a rotating basis. Anna encouraged everyone to pick an object of interest for a joint issue of Orientations Journal. I picked a painted manuscript from Burma/Myanmar (pictured above), a special horoscope system for an article titled ‘A Painted Manuscript from Burma’, and then was glad to see these enlarged and hung for many years in the large meeting room (MB116) in the Main Building. 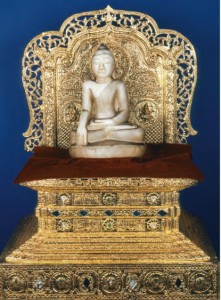 I also grew attached to an alabaster image of the Buddha that had once stood next to the trash can in the School Secretary’s office.  Anna rescued it, and we worked to document its history, probably once within the royal palace at Mandalay, and then taken to Britain by one of the soldiers who had brought treasures out following the exile of King Thibaw in 1885. The elegant image had no palin or throne, so I contacted U Win Maung (Tampawaddy), an artist in Mandalay, who sketched a suitable throne and backdrop. I took these to the Shwedagon pagoda in Yangon and had a throne made, which came into London Heathrow as part of my checked luggage on New Year’s Day in 2007. It sat on the fourth floor of the Brunei Gallery, looking very bright with its new gold paint (pictured above left), until when the Foyle Special Collections opened, it at least moved to the Brunei Gallery to properly support the image of the Buddha.

Our student numbers steadily grew, particularly the overseas cohort coming for the unique range of staff, courses and events. We offered a deliberately wide range of courses, from my own on ancient and contemporary Southeast Asia to masquerade in Africa, the archaeology and fine arts of the Near and Middle East, and the Edo arts of Japan. In 2007, the Postgraduate Diploma in Asian Art joined with A&A, and in 2009, our name was changed to the Department of the History of Art and Archaeology (HAA) to reflect the ways in which we connect regions and disciplines in our teaching and research. We wanted to make it clear that art and archaeology are inseparable in understanding and contextualising material and visual culture. 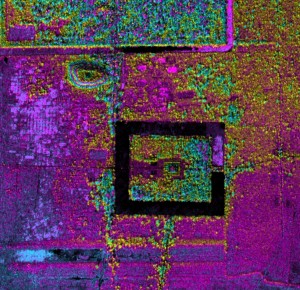 We prided ourselves on not just being the space at Russell Square but reaching out across the world. In the 1990’s when I was working with the Jet Propulsion Laboratory of NASA on the use of radar remote sensing at the 9th to 14th century CE city of Angkor, I was able to link the splendid images of JPL/NASA to the reliefs and architecture of famed temples such as Angkor Wat. The collaborative work with the JPL/NASA scientists and with anthropologist Dr Ang Choulean in Cambodia documented both the ancient hydrology and a distribution of phraa phum or spirit posts planted in the centre of a distribution of pre-Angkorean circular moated sites.

Our global network also encouraged me to work steadily with academics in Myanmar throughout the 1990s through the opening up of the country in 2011 and continuing today. I served as Correspondent for the Memorandum of Cooperation signed with Yangon University in 1995, opening doors to work together with teachers and Staff. My PhD students and our London network of Southeast Asianists provided another route of exchange, with a group of us always attending the bi-annual meetings of the European Association of Southeast Asian Archaeologists (EURASEAA). 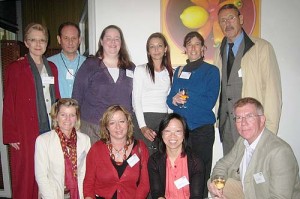 Angela, Alexandra, Vittorio and Peter all received their PhD with me, while Lesley, Sofia and Cristina completed their MA with the History of Art and Archaeology Department and have gone on to work on doctoral dissertations at Leiden and University College respectively. Alexandra, after teaching and curating in the USA, Hong Kong and Austalia, is now back in London at the British Museum. Narisa finished her MA with the Geography Department at SOAS, both of us benefitting from the warm mentorship of Prof. Philip Stott. Over the years many of us have been benefitted from the unique academic and artistic profile of Narisa’s publishing company, River Books, a mainstay for Southeast Asianists throughout the world. 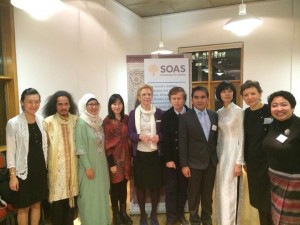 In 2013, HAA received an extraordinarily generous bequest from the Alphawood  Foundation to enhance our Southeast Asian resources, endow scholarships and undertake locally-led capacity-building projects in Southeast Asia through the Southeast Asian Art Academic Programme (SAAAP). Seeing the first batch of Alphawood Scholars at SOAS in the autumn term of 2014 brought students from across Southeast Asia to SOAS.  In 2012, HAA joined with the Music Department and Centre for Media Studies to form the School of Arts (SoA), which has developed under the leadership of Anna Contadini with her encouragement to reach out across geographical regions to find common interests. 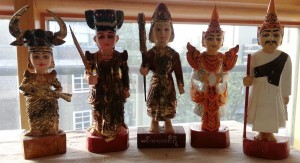 Upon leaving, I donated the Southeast Asian folk art collection of over a hundred pieces housed in my office to the newly created Lady David Gallery in the former Percival David Foundation on Torrington Square and now home to the Doctoral School. My collection is mostly from Burma/Myanmar, simple pieces like spirit figures or nats made in the 1990’s, small colourful figures whose simplicity belies the long tradition of woodcarving and nats within the Buddhist culture of Myanmar. It also includes gifts from now-prominent artists such as Min Wae Aung whose other paintings of monks were given to the School by the artist during a visit to me in London. Miss Yoshiko Yasumura, who for many years was the Art Librarian for the School, has been helping to finalise the database I prepared with the history of each object. From the 2016-2017 Academic Year, the HAA Department plans to incorporate these into the Teaching Collection that students can use to make their own exhibits in the Lady David Gallery under the guidance of Dr Louise Tythacott.

Since leaving in the summer of 2015 I have taken up the post of SAAAP In-Region Liaison Consultant in Yangon, to assist the development of locally driven projects with universities, museums and the wider public to enhance knowledge and awareness of Southeast Asia. With Myanmar in the midst of accelerated change, the SAAAP projects on Bagan and with libraries and museums help seed the programme for the future. Over the years, it has and continues to be a wonderfully rich and fulfilling career, thank you SOAS for being there and for the Centenary Celebrations of 2016-17.