‘I do believe Julia’s work to be seminal. It won’t be forgotten. It will go on branching and flowering and fruiting in the work of other students, researchers and scholars, and may even influence social reform. A tree cut down, after all, can grow up again from the roots’    Dr William Radice – poet, writer, Senior Lecturer in Bengali language and Literature at SOAS – Journal South Asia Research, Vol 25. 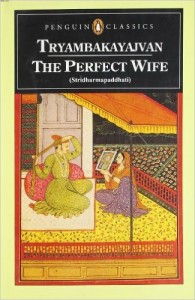 When the young Dr Julia Leslie decided to travel to South East Asia she became fascinated by the study of Indian religions; she duly became a Sanskritist who specialised in Dharmashastra – Sanskrit texts on religion, ethics and the law.   Through these Julia wrote about women, sexuality and myth employing a keen “scholarly detachment”[1] which some put down to her original study of philosophy, her first degree, at Sussex.

One of her most important pieces of work was “The Perfect Wife: The Orthodox Hindu Woman according to the Stridharmapaddhati of Tryambakayajvan” (1989).   Tryambaka (1665-1750) viewed woman as sinful, impure and wicked.  As a liberal feminist Julia obviously found these views ‘bizarre’[2] but insisted too that ‘there is a real need for understanding. If we wish to argue at all persuasively for change, we must first understand what is going on’ (ibid).

Julia’s work in the field of myth was particularly exciting; it developed from themes in ‘The Perfect Wife’ and showed how Tryambaka’s view of Indian women was totally embedded in ancient Indian myths, particularly in that of the Indra and Brahmin-murder.  She produced great work on Girish Karnad’s play about the twelfth-century Vīraśaiva saint, Basava (c. 1105–68), drawing on the direct route from myth to present day sexual politics, and concluding with the ‘disturbing realisation that it is a small step from the mystic’s vision to the violence of religious terrorism’ [3].

Julia was a passionate ornithologist and this also seeped into her academic work, particularly so in her article for the Journal of Indian Philosophy in 1998 on ‘A Bird Bereaved: the Identity and Significance of Valmiki’s krauñcha’.  It was the Valmikis, a community in the Punjab with a considerable presence in Britain, that led her to write her greatly acclaimed book ‘Authority and Meaning in Indian Religions: Hinduism and the case of Valmik’ which again drew connections between the ancient texts and current day religious politics; she became very close to the British Valmiki community and it was they who garlanded her casket at her funeral service in 2004.

‘Julia was a teacher, a truly gifted and creative teacher who loved nothing more than to share her understanding of her subject with others, and to inspire them with her love for it’  Subir Sinha, Chair, Centre of South Asian Studies, now the SOAS South Asia Institute.

Authority and Meaning in Indian Religions: Hinduism and the case of Valmiki. Aldershot: Ashgate, 2003.

Essays on the Ethnology of Nepal and South Asia, by A. W. Macdonald (tr., from French to English). Kathmandu: Ratna Pustak Bhandar (Bibliotheca Himalayica series), 1975.

On the Economic Geography of Nepal: problems of transport and communications in eastern Nepal in connection with the Swiss Technical Aid in the Jiri region, by R. Schmid (tr., from German to English). Kathmandu: Tribhuvan University, 1973.

‘The implications of bhakti for the story of Valmiki.’ Anna S. King and John Brockington (eds), The Intimate Other: love divine in Indic religions, Hyderabad: Orient Longman, 2005, pp. 54–77.

‘The significance of Valmiki for British Valmikis.’ Leslie and Clark (eds), Creating a Dialogue, pp. 1–5.

‘Understanding Basava: history, hagiography and a modern Kannada drama.’ Bulletin of the School of Oriental and African Studies 61.2, 1998, pp. 228–61.

[1] A speech given at the Memorial Meeting for Dr Isobel Julia Leslie (23 January 1948 – 24 September 2004) at the School of Oriental and African Studies, University of London, 24 November 2004; subsequently published in 2005 in the journal South Asia Research, vol 25, pp. 123–7; and reproduced here by kind permission of the author and of the publisher (Sage) and editor (Prof. Werner Menski) of that journal – by Dr William Radice

[2] “The Perfect Wife: The Orthodox Hindu Woman according to the Stridharmapaddhati of Tryambakayajvan” (1989).