Richard Rathbone, Professorial Research Associate, Department of History remembers the SOAS scholar who went on to be an internationally celebrated radical intellectual before his assassination in 1980.

The revolutionary historian Walter Anthony Rodney studied for his PhD at SOAS between 1963 and 1966. Born in Guyana, Rodney achieved a first class degree in history at the University College of the West Indies in Jamaica before coming to London. At SOAS he worked with the late Richard Gray. While Rodney was to describe Gray as a “liberal bourgeois historian” this was a close, productive relationship. Gray, Rodney recalled, “went out of his way to accommodate my own development and my own view.” The personal warmth found its way into the moving obituary Gray was to write for Rodney in The Times. 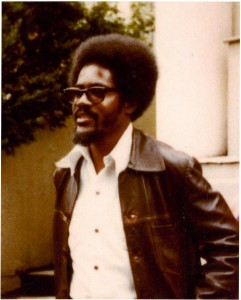 Walter Rodney took his PhD at SOAS in the 1960s

Rodney’s thesis was published by Oxford University Press as A history of the Upper Guinea coast 1545-1800. During his graduate years Rodney was a member of the weekly SOAS African History Seminar, the first such seminar in the world, and was a contemporary and companion of a remarkable international cohort of young historians who were to establish African historical studies in a large number of significant centres.

In 1966 Rodney began to teach at the University of Dar es Salaam in Tanzania where he worked with another clutch of distinguished historians including Terence Ranger but was lured back to his alma mater in Jamaica.  Rodney was refining and voicing revolutionary ideas which led to his being refused re-entry to Jamaica, an exclusion which led to serious rioting in 1968 and to his emergence as an internationally celebrated radical intellectual. Excluded from Jamaica, he returned to Dar es Salaam’s history department where he worked until 1974. In that time he completed his most influential and most argued-over book How Europe underdeveloped Africa which was published in 1972.  The originality of his analysis, a dynamic understanding of what was then understood as “under-development” continues to stimulate discussion.

Rodney returned to Guyana in 1974 where the government blocked his university  appointment. He became more and more involved in active politics and was one of the founders of the Working People’s Alliance,  the only significant opponent of the government of Forbes Burnham. He was briefly imprisoned in 1979. At the age of only 38, Walter Rodney was assassinated in Guyana by a bomb. His ideas survive him.