Guest Blog: Threat of famine brings with it mass displacement in Somalia 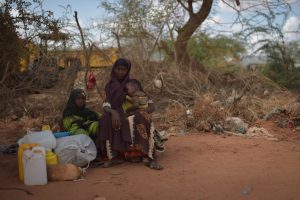 By Abdurahman Sharif and Aude Galli

Since November 2016, 3,000 people a day in Somalia are being forced to abandon their homes in search of water and food. It is the highest displacement level since the 2011 famine.

Mogadishu, the capital city of Somalia, is host to the largest number of Internally Displaced Persons (IDPs) in the country. In 2015, it was identified as one of the fastest growing cities in the world[1] as the result of the return of a wealthy diaspora and a growing investment in real estate. In contrast, in the same year, over 100,000 forced evictions of IDPs occurred and, since November 2016, 60,000 further evictions have been reported. Most of these IDPs were settled in government owned buildings or private land and were forced to move out as the land was being reclaimed for reconstruction and development. IDPs are highly vulnerable to drought. Most of them are from marginalized communities and are traditionally sidelined.

Although there is a common assumption that ‘drought-displaced’ refugees and IDPs will go back home right after the drought, this is usually not the case as other factors such as security and access to services and education tend to influence the decision to stay or return. . In June 2012, despite improved rainfall, only 14% of Somali refugees in Dadaab displaced due to 2011 famine said they would consider returning, and by mid-2013 voluntary returns were still very limited. Similarly a majority of the 2011 IDPs are still displaced today.

Most drought-induced IDPs have gone to urban areas. In the central city of Baidoa for instance, over the past weeks the number of IDP settlements has doubled to 147 in total today. The majority of those displaced are women, children and elderly people and are confronted with serious abuses including rape, beatings, discrimination and restricted access to food and water. 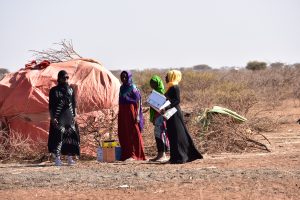 Since December 2014, 61,665 Somali refugees have returned home, including 22,351 in 2017 alone. Currently, 20,991 refugees are registered for voluntary repatriation. Bur since the announcement of the intended closure of Dadaab, the ongoing repatriation process has been fraught with challenges. Several human rights organisations and NGOs have described the repatriations as coercive and contrary to the principle of non-refoulement in international law and the conditions in south-central Somalia as not being conductive to mass refugee returns due to ongoing conflict insecurity and humanitarian conditions.

According to the UNHCR-led refugee population fixing exercise, 74% of Somali refugees in Dadaab are unwilling to return home, largely as a result of insecurity in Somalia. Due to the existing dire conditions in areas of return, the lack of absorption capacities and the lack of reintegration support beyond the return package, there is a high likelihood that most of the returnees will head to the already overstretched and under-resourced IDP camps across the countries.

Given the impending humanitarian crisis, UNHCR and the governments of Kenya and Somalia need to take into account the consequences that sustained repatriation may create. Contingency measures, including the further deferring of repatriations and revisiting the decision to close Dadaab refugee camp, must be considered as areas of return are impacted by drought and pre-famine conditions.

One thing is clear – drought does not have to turn into famine. Weak governance and infrastructure, conflict and lack of access to parts of the country are all factors that contribute to the position that the country is in today. Alongside an immediate emergency response, different actors – development, political, civil society – have a role to play in strengthening the capacity and leadership at local and national levels to manage and mitigate the impact of drought-induced displacement and look at long term durable solutions. The recent establishment of a Ministry of Humanitarian Affairs and Disaster Management to deal with these issues is a small first step in this direction. It is also of paramount importance to continue linking immediate relief to long-term development and to invest in preparedness to prevent further drought-related displacement and to support sustainable development complementing humanitarian interventions.

More than 187,000 people have been displaced in March alone within Somalia due to the drought, bringing the total number to more than 599,000 since November 2016. As these horrendous figures show, drought turning into famine brings with it a massive displacement crisis. The current influx of refugees and IDPs compound an already dire situation with more than 1 million IDPs and almost 1 million refugees in the region. Humanitarian and development actors, both Somali and international, must engage in joint planning and identify collective outcomes under the leadership of the government. Human resource capacity to focus on longer term planning activities in the early stages of displacement must be increased through the engagement of development experts such as urban planners, experts in local government and community driven development to support government capacity.

Drought cannot be addressed in Somalia without a better understanding of displacement trends and dynamics. It is critical to improve the use of displacement related data and analysis to inform the ongoing drought response and prevent further displacement.

Abdurahman Sharif is the Director of the Somalia NGO Consortium. Aude Galli is the Coordinator of the Regional Durable Solutions Secretariat (REDSS).

The views expressed here are those of the authors and do not represent the views of the Research and Evidence Facility or the EU Trust Fund for Africa.

Contribute to our working paper series