This week, Asad Zaidi shares his thoughts on what SOAS means to him.

Asad has followed in the footsteps of his grandfather, Dr Zawar Zaidi, who studied and lectured at the School before becoming a world authority on South Asia.

How did you discover SOAS?

I first arrived to study at SOAS in 2012 for my masters, but I had already heard of the School from my grandfather. He was a lecturer of Islamic and South Asian History at the School for 30 years, so the university definitely held some significance in my head as the place my grandfather taught.

I completed my BA at Birmingham University where I had developed an interest in Middle East politics. My dissertation was on the Egyptian Revolution and whilst applying for Master’s courses, I came across the MSC in Middle East Politics, convened by Charles Tripp. It felt like a natural progression.

SOAS had many attractions. It offered a really thorough course but also a stimulating environment in which to learn and socialise. I liked the fact that it was bit of a time capsule, a close-knit institution in the heart of London known for its vibrant music and cultural scene. I was intrigued about studying social science from methodologies explicitly built on the work of academics from different regions, and whose aims of destabilising narratives and offering counter analyses to dominant understandings of conflicts interested me. You would be able to explore the same ideas in other universities, but perhaps not with the same level of academic expertise, or commitment to those topics from the student body.

What do you remember most about your time here?

It’s hard to pinpoint one thing; playing football in Russell Square, enjoying live music in the JCR, attending every possible event under the sun. Another memory is from Graduation Day. I hadn’t bought a ticket to the ceremony, but decided to turn up anyway at the last minute. I rushed in thinking I had missed everything. When I arrived at SOAS, a friend lent me their graduation gown and it turned out I had arrived just as everyone was congregating in the marquee. Enjoying the canopies and kora music on a balmy summer’s day was special.

In terms of influential people, I would say that Charles Tripp and Arshin Adib-Moghaddam were hugely influential. Both were fantastic tutors and mentors whose work and advice has been immeasurably beneficial.

One of the themes of the centenary is ‘What does SOAS mean to you?’ What are your thoughts on this subject?

The intellectual curiosity it solicits, as well as the vibrancy of its community.

The conversations I have had, and the ideas exchanged have opened up to me how much more there is to be known, explored and created. It’s been a great place to take a closer look at the systems of power that structure our world and some of the ideas on how to change it. I’ve made a lot of friends for life and had a lot of fun along the way.

Your grandfather, Dr Zawar Zaidi, was a popular figure at SOAS. Can you tell us about him?

My grandfather was a lecturer in Islamic Studies at SOAS. He arrived in the UK in the 60s with his wife and two children, having been a prominent student leader in the early years of the founding of Pakistan.  He began teaching here; where he became a world authority on Islamic history with a particular focus on South Asian History from the Moghul Period to the independence movements of the subcontinent. His love of sufi poetry and Islamic art were other passions.

From what I’ve heard he became a well-loved figure at SOAS. His reputation as a scholar in the UK, Pakistan and elsewhere was that of a brilliant mind and a giving teacher, respected by peers and students alike. He had taught Presidents, Prime Ministers and historians, and contributed to promoting ideas that had an influence on the history of Pakistan. He was involved in movements at the grassroots in supporting Pakistan’s education and archival heritage, along with his wife, Parveen Zaidi, a UN specialist in restoration. They tried to help people in any way they could; this included housing new foreign students coming over from Pakistan and beyond to study in the UK. 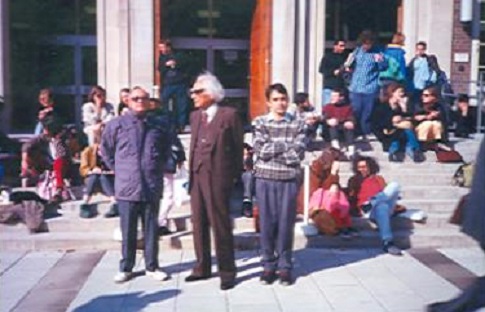 After he took early retirement in 1990, SOAS kept his office open and maintained a relationship with him as long as he lived. His work didn’t finish there though as he started out on a project that was a first of its kind. He led a team in recording and documenting the history of Pakistan into volumes of national history known as ‘the Jinnah Papers’. This had never been done before and remains one the definitive records of the founding of Pakistan and its founder, Muhammad Ali Jinnah.

What influence did your grandfather have on you?

He was a remarkable speaker and a prolific and renowned scholar who realised his ambitions. But on a human level, he had a lot of time for people.

As a grandfather his impact on me and my interests has been profound and I get a constant reminder from the many people who knew him about his warm character and generosity of spirit.

To view interviews of other SOAS alumni click here…

To view the profile of Dr Zawar Zaidi, visit the Centenary Timeline…