Home/2000s, 2010s, Challenging the status quo, Leading voices, SOAS in the world/The class of 2001: Where are they now? Professor Tony Allan finds out

This week, Professor Tony Allan looks back on the work of the Water Studies Group as three of his former students talk about their studies, careers and contributions to international development.

Professor Allan retired in 2002 and remains active internationally. He still specialises in the analysis of water resources in semi-arid regions and on the role of global systems in ameliorating regional water deficits. In 2008 he was awarded the Stockholm Water Prize in recognition of his contribution to water science.

In the last two decades of the twentieth century SOAS established a global profile as a consequence of the contributions of its London Water Research Group. The staff and research graduates re-conceptualised water and food security by highlighting the link between water, food and international trade. It was the outcome of the focus of the SOAS researchers on the very water scarce Middle East region. Populations were doubling in 30 years causing steep increases in the demand for food. Food consumption accounts for 92% of the water consumption of an economy. Middle Eastern water resources were under increasing stress. Water wars were predicted by authoritative regional leaders such as King Hussein of Jordan and Boutros Ghali of Egypt and the UN. The SOAS water scientists had to explain why armed conflict over water never happened between nations. They invented the concept of virtual water which is the water embedded in food commodities. About 160 of the world’s 220 or so economies are net food importers. Virtual water ‘trade’ is normal. It enables the water deficit economies of the world to enjoy the version of food-water security first identified in the Middle East.

By 2001, six research graduates had gained their PhD degrees on water related topics. Three of them graduated in July 2001 and they figured in the Alumni Newsletter. They went on to have international careers in water related economic and social development. When contacted they responded as follows:

I started my research at SOAS with Professor Keith McLachlan in the late 1970s on water resource management in southern Afghanistan. When Soviet forces entered Afghanistan in 1979 I returned home for the duration of the ten years of hostilities. When I came back to London in the mid-1990s to resume my research, I quickly realised the analysis of water resources had acquired new momentum. It was assumed that explanation would be found in politics and the political economy. By then, Tony Allan had identified the concept of ‘Virtual Water’ which helped us all have a better understanding of the nature of water security enjoyed by the water scarce Middle Eastern economies. We noticed the water science profile of SOAS becoming more prominent and benefited immensely from its international networks.  I have very much appreciated being part of the London Water Research Group. Recently, Ashraf Ghani, the Afghan President, asked me to lead a team of water experts to prepare a comprehensive plan for water resources management in Afghanistan.

In the 1990s we were aware that SOAS Water Studies Group was thinking beyond current norms and was challenging the existing consensus. The group was comfortable using  the tools of political theory and political economy. In retrospect, it was at least 10 years ahead of its time. The rest of the world of water and development – and water science in particular – has played a long game of catching up. We were privileged to have the chance to develop our ideas with Tony Allan. 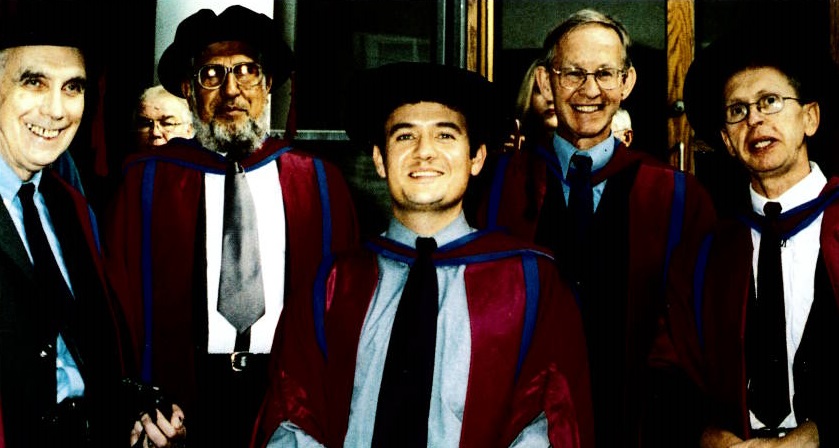 After graduation in 2001, I continued working with the Overseas Development Institute (ODI) as a Research Fellow and established the Water Policy Programme (www.odi.org.uk/wpp), an enterprise still going strong some 14 years on. I was with ODI until 2009 and directed RiPPLE in Ethiopia for three years (www.rippleethiopia.org). I was then with the World Water Council as Director of Policy and Programmes before moving to IDS for a two-year stint as a Research Fellow, helping to establish the Water Justice Programme.  I led the Water Smart Agriculture project at CARE while based in Uganda and launched the Sourcebook on Water Smart Agriculture in East Africaat the World Water Forum in Korea, 2015. I am now Theme Leader, Governance, Gender and Poverty Reduction at the International Water Management Institute (part of the CGIAR system) and based at its offices in Colombo, Sri Lanka.

During my graduate studies at SOAS, I became been deeply involved in Nile basin development. For over 20 years I have observed and commented on the basin, especially on the transformation of the role of Ethiopia in the use of Nile waters.

The graduates who shared the room on the third floor of the Phillips Building in the late 1990s brought deep regional experience, lots of humour and much warm moral support to the otherwise lonely business of graduate research. We all benefited remarkably from sharing time together unaware that we were building important professional foundations that would enable all of us to make careers in the field. After graduation, and until 2004, I was an adviser for a Swedish-based international development NGO. The projects were in Central Asia, Jordan and Sudan. I also completed studies for the German Development Bank (KfW) and for the German Development Cooperation (GIZ).

From 2004 to 2011 I worked for GIZ on the water resources problems of the very water scarce Yemen contributing to Integrated Water Resources Management studies. Later I worked on Decentralised Water Resources Management. In March 2011 my family was evacuated from Sana’a following the Yemen’s Arab Spring.  Since 2011 I have been in Cairo as Deputy Programme Coordinator for the GIZ Middle East and North Africa region climate change adaptation programme. The activities have supported the Arab Ministerial Water Council of the Arab League.