A student’s passion for Vietnam

A student’s passion for Vietnam

An alumnus of the South East Asia Department, Sebastian Rumsby (BA Vietnamese and Development 2007-2011; MA South East Asian Studies 2013) recollects his time at SOAS and shares his passion for Vietnam. 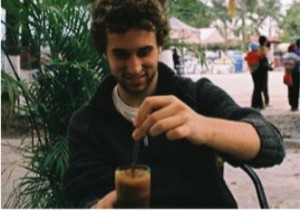 My journey into South East Asian studies started somewhat randomly at SOAS during my undergraduate degree, where I chose to learn Vietnamese language alongside International Development because Vietnamese was on the bottom of a list of what to study with “BA Development Studies and …”, which turned out to be an excellent decision! During my year abroad I attained fluency in Vietnamese and over the course of my degree I gained an understanding of South East Asian politics, economics, history and religion. After graduating, I utilised my language skills to become a freelance translator & interpreter, before returning to SOAS to complete MA South East Asian Studies.

Every year, hundreds of thousands of tourists visit the Thăng Long Water Puppet Theatre in central Hanoi, the capital of Vietnam. Water puppetry has become an iconic representation of the nation, and is now seen as an essential part of the ‘Vietnam experience’ for international tourists, myself included. Originally a Punch-and-Judy-esque show, Vietnamese language comprehension is not a prerequisite to enjoy the show’s pantomime atmosphere, slapstick jokes, and excellent musical accompaniment. It might not be expected that such an innocent and neutral form of art would fall within the realms of state propaganda.

Upon visiting the Thăng Long Water Puppet Theatre in 2013, I was confronted with a shocking development: the performance had been completely rewritten, and was almost unrecognisable from the show I had seen at the same venue a few years before. At a time when ethnic tensions in Vietnam were at a peak, the show’s content had an obvious political agenda to promote a façade of national unity by portraying and describing Vietnam’s different ethnic groups as having a strong “sense of common ancestry and mutual attachment”. Initially I was convinced that this water puppet performance was being manipulated by state propaganda – just as the puppets themselves are ‘manipulated’ by the puppeteers. 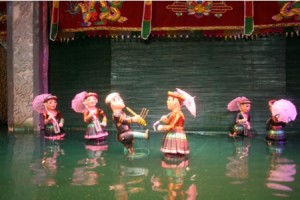 During my Master’s degree at SOAS, I wrote an article based on independent research attempting to uncover the methods of manipulation; if the show was being influenced or controlled by people or forces from behind the scenes who exactly were the puppet masters and how did they operate? This was no easy task, given the opaqueness of the Vietnamese state and the difficulty anyone faces wanting to research ‘politically sensitive’ topics. I ascertained this information by interviewing the theatre director and experienced water puppet performers, comparing different performances and analysing audience feedback.

The most fascinating aspect about undertaking this research was knowing that this recent politicisation of Vietnamese Water Puppetry had never (to my knowledge) been critically researched by anyone before; I was actually contributing something new to academia, and I hadn’t even started my PhD! Perhaps the highest compliment I can give to SOAS – and the South East Asian Department in particular – is that such opportunities are plentiful. If you want to make a difference to understanding the world we live in, then this is the place to do it.