A Year Abroad in Vietnam

A Year Abroad in Vietnam

With a Vietnamese mother and a Jewish father, I was always intrigued by different cultures and languages – in being different in general. Initially accepted to study French and Hispanic studies at Bath University, it all changed when I accompanied a friend to a talk at SOAS. Despite never having heard of SOAS, from the moment I stepped into the JCR and realised that it was possible to study Vietnam and Southeast Asian cultures, it was all over for Bath. I pulled out and quickly applied to SOAS to study Vietnamese and Development Studies – and so began my exploration of Thailand and Vietnam. 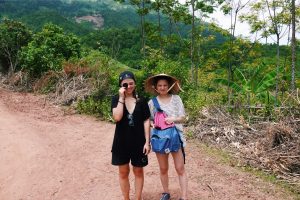 Hiking and biking Mai Chau with a fellow SOASian who flew over from Japan to join me for a week.

Under the tutelage of world class leaders in the field of Southeast Asian Studies, my knowledge quickly expanded and I began to focus on gender in Vietnam and Thailand, particularly how traditional notions of masculinities and femininities translated in a contemporary context. I was supported by my teachers, particularly Dr Dana Healy, who introduced me to books, films, resources and helped me to tailor my course in a way that inspired me. Towards the end of first year, I had an itch that I had to scratch. I was desperate to learn Thai in order to explore gender from the ground up. Supported by SOAS, I took a year off and spent my time between Phuket, Bangkok and Maha Sarakham.

Fast forward to third year and I was ready for my year abroad. I had heard incredible, confusing, outrageous and inspiring stories from former students about the immersive year, and it was time to make my own story.

I spent my year abroad in Ho Chi Minh City, Vietnam, studying at Trường Đại học Khoa học Xã hội và Nhân văn (Ho Chi Minh City University of Social Sciences and Humanities). The flexibility of the university allowed me to fully invest myself in my studies (I opted for 6 hours a day), whilst traveling to different parts of the country and teaching self-defence workshops. 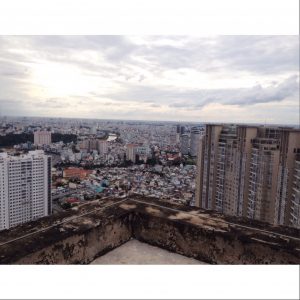 The view from the top of my apartment in Bình Thạnh dítrict, HCMC

The university was right in the heart of Ho Chi Minh’s central district: quận 1. The location meant that during the day, I was easily within reach of libraries, cafes, friends’ homes, art, history and business. I would ride a motorbike to class, accompanied by brave souls who volunteered to sit on the back of the bike and guide me. I spent many evenings studying alongside Vietnamese students who majored in Korean, Japanese, German, Thai and English and we would all tell stories dipping in and out of different languages. I soon became friendly with the local food vendors, particularly a young boy who sold nước mía (sugarcane juice) and found my addiction to this drink hilarious. Every time I would place my order for 3-4 cups of nước mía, he would laugh at me but throw in a free drink. Then there was the woman who sat near him and sold noodles. She knew I was vegan, so whenever she saw me coming would make up a special box for me. When I was feeling particularly outrageous, my favourite vegan restaurant would deliver food to the university for me.

One of my teachers invited me to travel to the countryside with her daughter, another teacher would bring me bananas to class and a different teacher would bring me Vietnamese desserts. I became friends with a girl who worked in the city’s elite gym and gave me free membership. In the evenings, I would return to quận 7, the Korean district where I lived with a Vietnamese friend and her sister. On the weekends, we would jump on bikes, board the ferry and make trips to the sea, their hometown and remote restaurants. I was adopted by my Korean hairdressers and also tutored their children, who would beg me to watch Disney films. Their grandma taught me to knit, and their Vietnamese maid would feed me and tell me about her family. 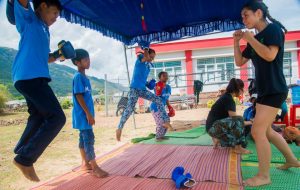 Teaching self-defence to the Raglai community in Phan Rang

A particularly memorable part of my time in Vietnam was the opportunity to continue providing self-defence workshops – a project that I started during my gap year. Using my background in Muay Thai, and the help of social workers, I had built a self-defence program for young girls and women. This time round, the charity had invited me to rework the program for children who belonged to a minority group of Raglai people in Phan Rang, Ninh Thuận province. The Raglai live in a matriarchal community, where inheritance is through the mother, land belongs to women, and women have to go out and “catch” their husbands. Once they have caught a man and have had children, the man comes and goes as he pleases. Despite this, domestic violence was prevalent and the charity wanted women and children to be aware of their bodies and to have some basic knowledge of self-defence. In partnership with Catalyst Vietnam, I spent just under a week teaching the children physical literacy and self-defence. 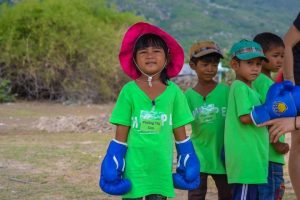 One of my youngest students proudly wearing her boxing gloves

Whilst in Vietnam, I also wrote my dissertation which focused on the clash of masculinities amongst the Vietnamese diaspora of California (“Caught in the Crossover: Exploring Gendered Relationships to Space and Identity within the Vietnamese American Diaspora”). My Vietnamese teachers were aware of my ongoing project and interest in gender, and would therefore spend hours giving me personal insights into their experiences of gender in Vietnam. During one lesson, my teacher turned up with pages and pages on abortion, even showing me an online cemetery that existed for aborted fetuses, something that I would have never learnt about without their active engagement and support. One female teacher told me about her experience of domestic abuse, another told me about what gender performances were like in post-war Vietnam and another about her daughter’s experience of gender traveling back and forth from Japan. To cut a long story short – apart from it being clear that I have a love affair with food, the above provides a mere snapshot into the multiple and different relationships that I was lucky to experience in the city. It is the people that really transformed my time there and taught me one of my most important lessons: hiếu khách (hospitality).

Jessica’s blog can be found at www.littleboyd.com