Tavan Dutton is currently in the third year of his BA Chinese Studies at SOAS.  He also studies Indonesian Language as an ‘open option’ and last academic year he took time off from SOAS to spend a year in Indonesia.

As is often the case, my decision to learn Indonesian at SOAS was completely unforeseen but it turned out to be one of the best decisions I have ever made. I had already decided what major I wanted to take before I started at SOAS. In my first year I had one free module and after looking through the options available only then saw that Indonesian was offered. I was excited at the thought of doing Indonesian language but the choice was after all, just to fill a spot. Now in my final year I have found that I have thoroughly enjoyed being part of the South East Asia department. Since studying at SOAS I have spent a year in Indonesia and while beginning as simply my open option, Indonesian language and culture has now become a passion. 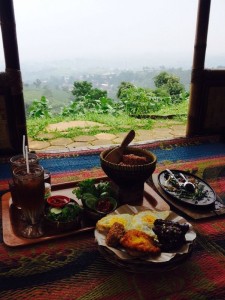 While Indonesian is often considered to be an ‘easy’ language to learn, I found that this is only half true. Like any language I realised that it’s very easy to have broken Indonesian but very hard to get to a higher level especially with such a dynamic language. The whole of my first year I was just trying to get my head around the prefixes and suffixes of various linguistic points of Indonesian language. After a year at SOAS learning the basic grammar, I thought that my Indonesian was already pretty good and I was extremely eager to go to Indonesia and use my newly learnt language.  This arrogance was completely dashed when I did get to Indonesia and quickly realised my conversational Indonesian still needed a lot of work.  As my Indonesian friends laughed when I used what I had learnt, I realised there was a great difference between bahasa baku (formal language) and bahasa gaul (the vernacular).

While at SOAS, I gained the opportunity to live and study in Bandung on the Indonesian government’s Darmasiswa program which I applied for through the South East Asia department.  This allowed me to not only advance my language level but also gain an understanding of Indonesian culture and lifestyle. Most days I would spend eating world famous Indonesian food, chatting and chain smoking cigarettes with the local guys or driving my moped around the nearby mountains, stopping off at the small and quirky cafes dotted along the mountainous forest drive. 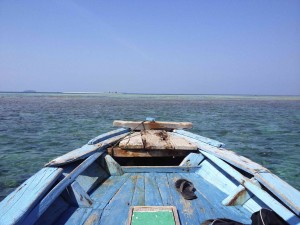 The house I lived in was in a dense residential area near my University; a seemingly endless maze of shacks and laneways only wide enough for one person at a time. There was a great sense of community spirit and if I ever had a problem I could ask any of the good friends I made or my helpful and friendly neighbours. When I first moved in there were a few things that I had to get use to, like using a squat toilet or bathing with a bucket and ladle, but after a short while this became a daily routine.  When it was time for me to return to the UK, half of the neighbourhood came out to say farewell as I left.

I had so many memorable and unique experiences while in Indonesia including modeling for a biker gang to coming last on a game show on national TV. I was also there for the general election that polarised the nation, evident by the many debates amongst friends about the two candidates and the future of the country. It was an unforgettable year which would never had happened had I not decided to take Indonesian language in my first year. At the end of my year in Indonesia I obtained an  ‘advance’ level in my Indonesian language standardised test. It was in the SOAS Indonesian department that I was first exposed to Indonesian language and it was under this faculty that my interest and language skills developed due to the encouragement and dedication of the faculty staff. I believe that this department can offer any prospective student a truly memorable and unique experience.