Researching in the Jakarta Film Archive

Researching in the Jakarta Film Archive

One of the most enjoyable aspects of my research on Indonesian cinema has been the opportunity to spend time at Sinematek, the Indonesian film archive, in Kuningan, Jakarta. The archive holds a treasure of resources that are vital to anyone researching on Indonesian film. Occupying several floors of a larger building, the holdings of Sinematek, otherwise known as Pusat Perfilman Haji Usmar Ismail, named after one of the greatest Indonesian film directors, can be broadly divided into three parts. 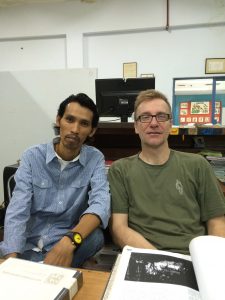 Researching in the archive

On the top floor there is the library, which in addition to a large number of books, dissertations and journals related to Indonesian and world cinema, also has a tremendous collection of clippings related to all aspects of the Indonesian film industry. These clippings go back decades, and so for research on films from the New Order period (1966-98), one of the best ways to get started is to simply ask the librarians for the clippings related to a particular film. Clippings are also organised by topics and by certain key names, as well as by date. Clippings are still collected each day by the staff of the library from a range of newspapers and magazines. The quality and quantity of clippings from any given period and topic will obviously depend in large part on the diligence of the staff member responsible at the time. While sometimes I have been exasperated at the lack of clippings on a particular film, at other times I have been amazed and relieved that whoever was doing the work was so conscientious.

One other very useful aspect of the holdings is the collection of scripts and synopses. During the New Order days, production companies were required to lodge a copy of a script and synopsis with the archive. As I’ve discovered, the original script is often significantly different from the final film – and so offers a fascinating glimpse into the development of the film, and in some cases what got cut as the project developed. My work on Istana kecantikan, – an important film from 1988 about a middle class gay man forced to marry due to familial pressure, – benefited no end from being able to read significant chunks of Asrul Sani’s script which never made it into the final film, including a whole ‘gay wedding’ scene. 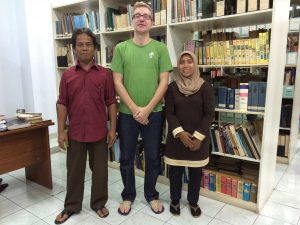 The other really important aspect of the archive is the films themselves, and on the floor below the library there is a team dedicated to the preservation of the films in a whole range of formats, as well as stills and posters from the films. There are viewing rooms where the films can be watched, and the team there will do what they can to help any researcher access the resources they need. Certainly the holdings are not complete – some films have gone missing, and others were never archived in the first place. For example, it is a constant frustration that I’ve not been able to get hold of copies of Mereka memang ada (They indeed exist), a 1982 film about Indonesian waria, and Gadis metropolis 2 (Metropolitan girls 2), the sequel to a 1991 film about three Jakarta middle class women, nightclubs, and a lesbian stalker. 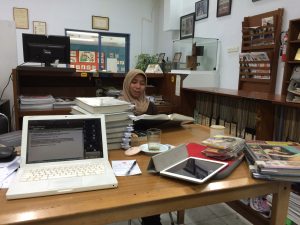 Reading room in the archive

If anything, problems related to maintaining the archive have become more difficult in recent years. Production companies and individuals often do not willingly contribute to the archive leaving big gaps in the holdings and Sinematek itself is drastically underfunded. Nonetheless for anyone wanting to work on Indonesian cinema, it is a very good place to start, and without doubt the staff of the archive make it a truly warm and welcoming location for research. And if anyone reading this should come across either of those two films I mentioned – please, please let me know.

Dr Ben Murtagh is Senior Lecturer in Indonesian and Malay at SOAS. His book, Genders and sexualities in Indonesian cinema, was published by Routledge in 2013.