Back in February 2015 I received an e-mail from my Indonesian lecturer Pak Din explaining how every year the Malaysian authorities run a speech competition, and that he’d like to put me in for it. Indonesian and Malay are similar enough to be mutually intelligible, but since I had only just learnt to tell the time, Pak Din aptly ended the e-mail with the words “we shall discuss this further, but whatever you do, don’t panic.” At the time, I set about posting on Facebook that I’d been selected to represent the UK in an international speech competition. What I didn’t do, however, was to think about writing said speech until my exams were over, leaving just over a month to prepare. At the beginning of June I listened to a speech from a previous competition – I couldn’t even figure out what their topic was. I panicked. 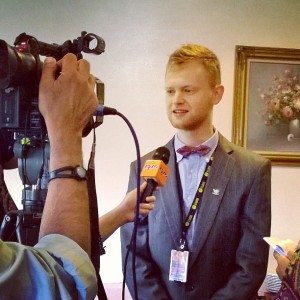 The Pidato Antarabangsa Bahasa Melayu (International Malay Language Speech) is an annual competition promoted by the Kementerian Pendidikan Tinggi (Ministry of Higher Education). The final is attended by the Prime Minister, and is broadcast live on major Malaysian TV channels. With 71 participants from over 50 countries, its purpose is to promote Bahasa Melayu (the Malay language), and give it prestige in a country increasingly dominated by English language education and communication. It receives a lot of media attention, and the winners in each category take home $7,000. I was confident I wouldn’t make it past the first round, but I was eager to repay the free flights and accommodation with hard work – plus, what an opportunity to improve my language skills! I still panicked, but I put those speeches on my iPod and played them on repeat.

Being the first time I had given a speech in any language, and with my Indonesian/Malay just about able to buy me a cup of tea, there was a lot to be done. Nevertheless, I had a summer ahead of me, and the help of a Malay phrase: sedikit-sedikit nanti lama-lama menjadi bukit (little-by-little, later, after a long-long time, becomes a hill!). If anyone at SOAS noticed flyers depicting a stick figure holding a Durian in one hand and a Malaysian flag in the other, pleading for Malay lessons, you know who was behind it! I was incredibly fortunate in that two Malaysians – Thessa Vasudhevan and Sofea Ghani, as well as numerous online penpals – answered my prayers. To Sofea Ghani especially I owe thanks. A champion in debates in Malaysia, she agreed to help me out so long as I understood her ****: “I am hard to please, I’ve been known to make my opponents cry”. Sofea taught me that writing a speech begins with asking yourself what you most want to say, write about what you know, and she made me compose it all in my broken Malay before she would even consider polishing it into Bahasa Baku (Standardised Malay). I couldn’t have done it without you Sofea, but I have to say the tables have turned: it was you who cried when I won!

The competition is divided into three categories: international students studying outside of Malaysia, international students studying within Malaysia, and native speakers from the Malay world (Indonesia, Thailand, Singapore, Malaysia and Brunei Darussalam). In my category, comprised of international students, I would go head-to-head against 40 others. A month previously I was convinced I would be out in the first round, but to my amazement my 5-minute speech – on how animals and plants are providing breakthroughs in sustainable design ­– won me a place in the quarter-finals! I would highly recommend to prospective speakers that you talk about something close to your heart, for it is likely to be unique. Who had heard of termite-mound-inspired-buildings before? (Thank you Sofea!) I was out of the frying pan and into the fire though, for by 9 am the following day I had to write and memorise an additional minute for my speech. On just over an hour’s sleep, half-mad with the story of how leaves could aid the solar power industry, I got myself a place amongst the 10 participants going to the semi-finals.

It was here that I think I learned something important. On the evening of the quarter-finals, we were all invited to dinner at the Seri Perdana (Prime Minister’s residence) in Putrajaya with the first lady of Malaysia – Yang Amat Berbahagia Datin Seri Paduka Hajjah Rosmah Mansor. It was a very humbling experience, and a lot of fun – the Datin Seri herself got up and sang karaoke! The only trouble was that we arrived back at about 11pm, and I needed to add another minute on to my speech before 9am the following morning. I was stressed from the intensity of the past few days, I just wanted to sleep – and besides, I would still have a fun time, and will have learnt a lot, if I flopped in the semi-finals.

This doesn’t sound like the story of a winner, right? That’s where Sofea steps in! What about all the time she had spent coaching me? Let alone the countless hours I had spent amassing vocabulary, studying speeches, and practicing in front of supportive friends? “You’re not here for a good rest,” Sofea told me, “you’ve written an inspiring speech about the environment, and you’ve been given an amazing opportunity to share it with the world. Which is more important?” She was right. I realised that my laziness was largely the child of doubt. I stayed up again (I think my roommate hates me now), but I was ready to take the stage with the most important ingredient I can share to any prospective speakers next year: pride. You’ve all got inspiring things to say.

By 11 am the news was out: Australia, USA, and the UK were in the finals! I was blown away. I was terrified. In two days I would be speaking on stage in front of potentially thousands of people, not to mention the many more at home watching on live TV in Malaysia and abroad (that’s you, Granny!). Luckily, we three international students had become close friends, and were equally humbled to have made it this far in the competition. To be sharing a stage with the incredible native Malay speakers was also an honour and an inspiration. Thank you Akmal (the winner in the native Malay speakers category), you brought me to tears when I first saw you speak, you showed me how a speech can touch the most pressing issues in the world today. You made me prouder still to be part of this competition, (I also diligently studied your hand gestures!). 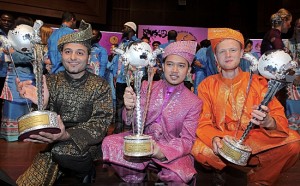 Joshua (right), sitting alongside winners of other categories in the competition

There is a strange thing about speeches. You worry for hours, sick to the stomach, but after half a minute on stage, the panic subsides. What’s more, as I unraveled my speech, in front of thousands of people, drowning in a bright orange oversized Baju Melayu, people were laughing in all the right places! I somehow denounced the pollution fossil fuels are wreaking on our intelligent planet, I managed to demonstrate that there was hope all around us, I walked off the stage and sat down. I’d done it! I was on cloud nine, I didn’t mind losing to the moving speeches given by the other two candidates in my category – a well of pride overflowed that hasn’t ceased since. Half an hour later though, I was on stage holding the silver trophy in my hands, clutching a giant cheque, with a scholarship to Universiti Putra Malaysia – the top environmental university in Malaysia – Sofea was crying, my mum (0 capability in Malay) had no idea what was going on, people were smiling at me, I almost dropped the trophy. It was a crazy time.

This competition has been the best two weeks of my life. Before beginning my final year at university I had no idea what would happen after, and now here I am with a year on the Darmasiswa programme in Indonesia at my feet, a future Masters degree waiting in Malaysia, $7,000 dollars for an environmental project, I’ve eaten noodles with the Prime Minister of Malaysia’s wife, I’ve been on breakfast TV, made friendships in another language, had some romance, all because of the SOAS South East Asia department. I want to say a huge thanks to Pak Ben, Kak Eli, and especially to Pak Din, for helping me take off my stabilisers in this beautiful language, rich in pantun and jokes, and giving me these life-changing opportunities. Ribuan terima kasih saya ucapkan kepada pihak penganjur Pidato Antarabangsa Bahasa Melayu. Last, but the opposite of least, I wish to say thanks to Sofea. Without your undying enthusiasm and encouragement, I would’ve trembled myself out in the first round. You made me believe in myself, you guided me every step of the way, and without giving me anything on a plate. I hope that one day I can match your kindness.

I had not been in contact with Pak Din – who sent me that e-mail back in February – throughout the duration of the competition, but after sending him the video of my winning speech, he wrote me these lines that I hope will be felt by anyone reading this. Thank you for donating your attention.

When a door is opened, go inside, who knows if there is something we could learn.

When an opportunity comes our way, embrace it as if it was purely meant for us.

When a door and an opportunity face each other, a future will rise up that could never be imagined.