Peace in Colombia – What is it good for?

Home/Conflict, Forced displacement, Neoliberalism, Peace/Peace in Colombia – What is it good for?

Peace in Colombia – What is it good for? 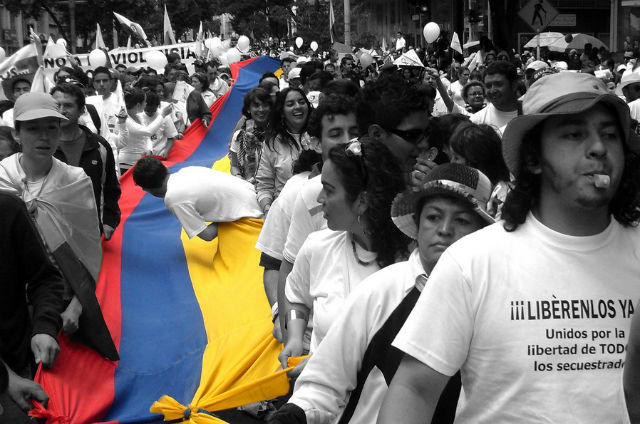 Colombians march for the freedom of people kidnapped by the FARC and the ELN. Photo by Marco Suárez courtesy of Wikimedia Commons.

Tobias Franz completed his PhD at SOAS on the political economy of local economic development and institutional change in Colombia and has taught in the SOAS Development Studies department.

The joy of the international community and the mainstream press was overwhelming when, on August 24th, after 52 years (or 70, depending on the definition) of armed conflict the Colombian Government and the Revolutionary Armed Forces of Colombia (FARC) announced a final peace agreement. After four years of negotiation, and far-reaching deals on rural land reform, political representation for demobilised FARC members, illicit crop production, and victim recognition and reparation, the Colombian public will be asked to vote for or against the deal.

While a “Si” vote is the likely outcome of the referendum on October 2, implementation and enforcement of the agreements will be contested. Furthermore, as Colombia’s pro-landlord brand of neoliberal development has not been debated at the negotiation table in Havana, it remains questionable whether a negotiated peace deal will bring inclusive growth for the country’s rural poor.

Both the contestation of the peace agreement and the lack of serious debate over the character of Colombia’s economic growth model can be explained by the historically-defined balances of power in Colombian society. While competing factions of the Colombian ruling class had achieved a bargain over political power for much of the 1990s and early 2000s, this changed with President Santos’ decision to embark on peace negotiations with the FARC. Driven by transnational class interests, Santos’ policy agenda is a complete shift away from ex-president Álvaro Uribe’s (para)militarised pacification tactics. Uribe and the rest of the narco-capitalists of large landowners and cattle ranchers depend on a state of war – and they will oppose the peace deal with everything they’ve got.

Historically, landed and industrial elite factions of Colombia’s ruling class have dominated the political landscape. Populist mobilisation against this hierarchic form of class rule was met either with violent repression or institutionalised autocratic rule. With increased political exclusion and economic marginalisation of most Colombians, leftist organisations – especially the FARC – led opposition to this traditional elite bargain.

Impoverished peasants who had been forcibly displaced from their land sought protection and representation in the FARC and fuelled its massive expansion in the 1980s. At the same time, several economic and financial crises in Colombia led to widespread rural poverty. Many peasants were forced to harvest illicit crops to keep their land and survive. And after the reduction of funding streams from the Soviet Union and Cuba, the FARC started to play a key role in the illicit economy.

However, the peasants harvesting the crops and producing the raw material for the drug economy remained at the lower end of this illicit value chain. The main beneficiaries were cattle ranchers, some large landowners and the drug traffickers (including factions of the FARC) controlling the majority of the production, processing and distribution chains. This “emerging bourgeois class” of narco-capitalists rapidly increased their wealth and power in the 1980s and 1990s, heavily contesting the elite pacto between landed oligarchs and urban industrialists. Álvaro Uribe, son of a large landowner who had been kidnapped and killed by the FARC, led this clase emergente in its fight against both traditional elites and the FARC.

With increasing violence in Colombia, different Colombian elite factions combined forces to violently oppose any FARC manoeuvres (insurgent or other). The U.S. Department of State and the Department of Justice orchestrated an alliance of landed, industrial and narco-capitalists, and provided finance and intelligence for the Colombian state and (para)military organisations.

Using paramilitary groups to violently protect landed wealth and the cocaine industry, the U.S.-supported Colombian ruling class intensified the war against the FARC, which has left approximately 200,000 dead and around 6 million people displaced. The objective of U.S. involvement was not primarily to combat leaders of Colombian drug cartels (as portrayed in Netflix’ recent hit series), but rather to destroy one of Latin America’s last-standing resistance movements, and to advance Washington Consensus-style policy prescriptions. The resulting violent paramilitarisation of control over large parts of Colombia and the economic liberalisation, privatisation and deregulation reforms only intensified forced displacement and rural poverty.

Colombia – A paradise for narco-capitalists

Colombia’s radical shift to neoliberalism in the late-1980s did little to rejuvenate the stagnating economy. Narco dollars, laundered through land deals in Colombia’s cattle-ranching hinterlands and through real estate and construction in urban areas, were the primary drivers of economic growth. Narco capital and integrating Colombia into global capitalism became the institutionalised bridges between the industrial, landed and extractive capital on one side, and the finance, real estate, and service-based economy on the other.

The dominance of these class interests, achieved by gathering different elite factions around the axis of narco-capitalism and transnational accumulation patterns, temporarily stabilised the Colombian polity and economy. While economically the FARC participated in and benefited from Colombia’s narco-capitalism, for the most part they remained political outsiders to the ruling coalition.

Meanwhile, the U.S. further bankrolled the coalition between narco-elites and transnational capitalists through the US$7 billion military aid package Plan Colombia. The resulting militarisation of the Colombian state and the fumigation of illicit crops in the agrarian frontier zones not only intensified forced displacement, but marked the full integration of Colombia into the U.S. war on drugs. Uribe’s election as president in 2002 was the pinnacle of the power of the narco-capitalists and their neoliberalised economic model underwritten by cocaine capital. Any opposition to this development model was violently repressed by paramilitary violence and systematic human rights abuses through extrajudicial executions.

Political shifts and prospects for peace

The election of Juan Manuel Santos as president in 2010 marked a major shift in Colombia’s polity and the country’s approach to achieving peace. Unlike his predecessor, Santos is a descendent of a traditional oligarchic family and now unites the growing transnational capitalist elite – self-conceived “modernisers” of Colombia – behind him. But Santos’s decision to start negotiations with the FARC did not come exclusively from an interest in further opening the Colombian economy to global capitalism and attracting FDI into extractive sectors, low-wage services, and labour-intensive industries. It also reflects changing dynamics of power and a break in the elite bargain between the traditional, now-transnational elites and the narco-capitalists.

With Uribe and colleagues contesting the current power constellation after being excluded from the ruling coalition, and the FARC increasingly fragmented and at its politically and militarily weakest point in recent history, what are the prospects for sustainable and inclusive peace and development?

One important consideration is agrarian reform. This started the Colombian conflict and is vital in a lasting solution to it. But as large landowners have acquired new haciendas in areas where violence and conflict were drivers of falling land prices, the distribution of land is now more unequal than ever.

Neo-paramilitary structures that remain in place for protection of landed class interests and a structural lack of investments in smallholding agribusinesses will deter displaced peasants from returning. However, the agrarian question is no longer solely posed in terms of land redistribution and capitalist transformation.

The second vital issue for lasting peace is political representation and disarmament of the FARC. The FARC have every reason to be suspicious of promises by the Colombian state regarding protected demobilisation and political representation. While the fears of reoccurring extrajudicial killings were addressed by creating so-called ‘transitory rural normalisation zones’ to facilitate reincorporation into civil society, the actual implementation of these zones will be contested. Paramilitary organizations, far-right politicians and armed force factions supporting paramilitary organisations will meanwhile do their best to undermine a peaceful demobilisation and disarmament process.

The peace process has already opened political space for new social organisations for popular mobilisations under somewhat improved democratic conditions. However, 112 members of the Patriotic March have been assassinated since its foundation in 2012. Another seven thousand have been detained and paramilitary groups have killed over three hundred peasant leaders and union members in 2015 alone.

Narco-capitalists as well as drug-trafficking factions of the FARC oppose the peace treaty; it undermines their raison d’être. Given the struggles at various levels to implement the treaty, substantial changes to Colombia’s cocaine-induced accumulation processes are unlikely. The agreed substitution of illicit crops for legal agricultural activities and immediate assistance plans, however, are a welcome change from traditional confrontational and militaristic approaches. Further commitment to medium- and long-term investments in rural areas are also needed for a more sustainable solution.

The bilateral ceasefire and reparations for victims are also welcome and necessary steps for achieving peace and reconciliation in Colombia. Both sides of the conflict have been ignoring the voices of the victims for too long. Victims’ organisations negotiated recognition and compensation agreements are substantial improvements, worthy of celebration.

While it is doubtful that the signing and (potential) ratification of the peace agreement will create sufficient conditions for Colombia to fully break the vicious cycle of rural violence, repression, and economic marginalisation, the peace deal has significant merit. A “Si” would further open up political space for movement building. Popular mobilisations against Colombia’s neoliberal model have increased in recent years, giving new social organisations hope that upcoming struggles will be continued by political and civil society rather than through armed conflict.

Our hope for peace in Colombia rests on the ability of these movements to unite in the struggle for sustainable and inclusive developments for urban and rural Colombians.

An alternative version of this article was recently published by Jacobin.