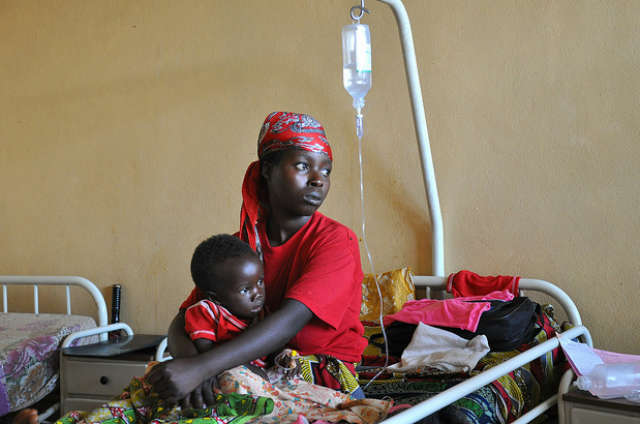 A mother and child recover from malaria in a Government hospital in Burundi. Photo via Flickr courtesy: Maria Cierna, Slovak Republic/UNDP.

Michael Jennings is a Head of Department and Senior Lecturer in the SOAS Department of Development Studies. His research interests include the politics and history of development processes in sub-Saharan Africa; governance, civil society, non-governmental organisations and faith-based organisations; and social aspects of health in Africa.

Where to start with the piece by new Minister for International Development, Priti Patel, in the Daily Mail? Her assertions that too often aid doesn’t get through to the people who need it most, whether because the EU has squandered it (Patel was a prominent Brexit campaigner) or because of corruption (evidence for the extent of which she was unable to provide for her appearance before a parliamentary committee)? Or claiming that the focus of UK aid is simultaneously the world’s poorest, to reduce the pressure for mass migration to Europe, and to ‘help build the UK’s trading partners of tomorrow’ (the latter two foci, critics might suggest, reflect the interests of the UK, not the world’s poorest)? Her priorities seem clear. In the accompanying interview, Patel makes it clear that the £12 billion aid budget needs to ‘deliver for our national interests’ (code for stopping immigration and linking development to national security).

The new minister has been taken to task for many of these assertions, especially by NGOs who see her vague, Daily Mail-friendly soundbites (there is remarkably little content or depth to any of the statements of intent) as further proof of the redirection of DFID away from its explicit focus on the poorest of the poor, towards boosting trade and investment as the solution for poverty (conveniently ignoring evidence gathered over the almost 90 years since the UK’s first overseas aid act, the 1929 Colonial Development Fund, showing that the rising tide of economic development not only doesn’t lift all boats, but leaves many stuck in the mud as the water rises above them).

Here, I want to explore her assertion that ‘wealth is ultimately created by people, not by the state …  that we need to empower the poorest to work and trade their way out of poverty, not treat them as passive recipients of our support’.

In the global health literature, there has been an argument between those who posit the ‘wealthier is healthier’ argument of, amongst others, Lant Pritchett and Lawrence Summers; and the opposing ‘healthier is wealthier’ argument of their critics. Sure, health is not a proxy for development in its entirety, but I think it has some useful ideas for us to look at.

In their famous 1996 article, Pritchett and Summers argued that, using infant mortality and life expectancy as markers for improvements in health, the data shows that health improves as countries get richer (the article is behind a paywall, you can access the original working paper here). They write:

Since rising income causes improved health (most likely through increased public and private spending on goods that directly or indirectly improve health), raising per capita incomes will be an important component of any country’s health strategy.The estimates imply that if income were 1 percent higher in the developing countries, as many as 33,000 infant and 53,000 child deaths would be averted annually.

This would seem to give support for Patel’s arguments that investment, trade, jobs and so on are the best ways to improve social indicators such as health. And if you believe that economic development is best delivered by the market, then that would suggest that states, as Patel suggests, do not create wealth. And wealth, once created, reduces poverty and the impact of poverty.

But actually the evidence on ‘wealthier is healthier’ is much more murky than its advocates allow for. The evidence that most draw upon seeming to link life expectancy and national income per capita is demonstrated in what is known as the Preston Curve, which does indeed show a correlation between increased GDP and increased life expectancy. Unfortunately for the wealthier is healthier advocates, Preston himself questions the assumptions taken from that curve, arguing public health is the key to improved health outcomes; and improved wealth may actually flow from improved health. In other words, states do create development.

Take the UK for example. Mortality began to fall throughout the nineteenth century, reflecting the discoveries of germ theory, the importance of hygiene in child-birth, and so on. But it is from around 1900 that it begins to fall more steadily. But was it economic development that fueled this drop in mortality? Far from it: there was no great or rapid increase in income per capita that preceded, or even accompanied, the shifts in health in the first half of the twentieth century.

So what was happening? There was a massive increase in state intervention in health and health-related areas: the adoption of compulsory, free education by 1899; local councils made responsible for the compulsory provision of children with free school meals in 1914; the establishment of the official state birth register in 1907; the introduction of a tax allowance to assist the poor in 1909, the first attempts the following year to introduce a redistributive tax system, and the creation of the National Insurance system the next year; and free medical treatment for poor children in 1912. Thirty years later came the construction of the welfare state: compulsory free education, family allowances, unemployment support, the construction of council houses and the responsibility placed upon councils for the provision of adequate housing and care for children; and the creation in 1948 of the NHS, still one of the most important achievements of any British government.

It was public policy that led to improved health outcomes. Incomes did not start to rise rapidly in the UK until after the 1960s, after the health improvements had been secured. And the UK is not the only example which can be brought against the wealthier is healthier hypothesis. In India and China, there appears to be a negative correlation between economic growth rates and infant mortality rates. Even in the US itself, the biggest falls in mortality occurred after 1970, when real income growth was stagnant. Cuba, of course, is the example most often used to show the problems of linking national income levels to health outcomes, with its higher life expectancy than the US. This suggests that far from impeding economic development, public policy and public investments in key social infrastructure areas are essential for it. For healthier people are more productive, can work more, can earn more. Just as a better educated population can do more, achieve more, make better use of existing and new opportunities.

Even more importantly, the evidence seems to be clear that inequality is the key factor in health outcomes (even in countries such as the UK where, in theory, health services are provided equally to all, regardless of wealth). The poor, everywhere, tend to die earlier. And economic growth which does not reduce the inequality gap does not reduce these inequalities in health outcomes. Wealthier nations does not create healthier people, unless inequality is reduced alongside. And this is a task that only the state can address through public policy.

There is something of a tradition where people grow into their role at DFID, as they begin to see the day-to-day realities of the difficulties and challenges of the development task. Patel may find her current views challenged by the evidence, as others have before her. But starting your tenure repeating the uninformed, un-evidenced and vague criticisms of the Daily Mail and some of her Tory backbench colleagues is not the best start. Now it’s time to move to listening and learning mode.