Systems in Flux: Constitution-making, Patronage and Post-war Politics in Nepal and Sri Lanka

Systems in Flux: Constitution-making, Patronage and Post-war Politics in Nepal and Sri Lanka 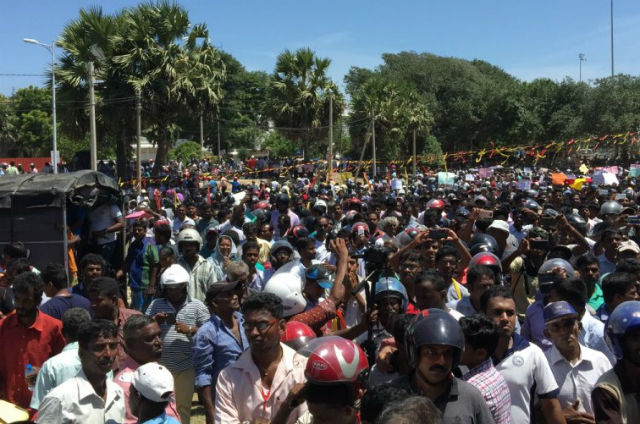 Recent demonstrations in Jaffna by the Tamil People’s Council.

Jonathan Goodhand is Professor Conflict and Development Studies at the SOAS Department of Development Studies. His research focuses on the political economy of conflict, war to peace transitions and increasingly on the role of borderlands, with a particular focus on South and Central Asia.

Sri Lanka and Nepal may have turned their backs on protracted and bloody conflicts, but the fault lines that fuelled these wars have not gone away. Instead they continually resurface and shape contentious politics in the two countries. The crucial challenge facing political elites now is that of constitutional reform. What is the basis of power sharing? To what extent should power and finance be decentralised? Where should new administrative boundaries be drawn?  How can minority rights be protected? And how can majority community buy-in be assured?

In Sri Lanka, President Rajapaksa’s ten years in office came to a sudden end last year with a defeat in Presidential and parliamentary elections. In Nepal, Prime Minister Oli’s CPN (UML)-led government was forced out in May 2016 and replaced by the Maoist leader Prachanda, who heads a new coalition with the Nepali Congress and Madhesi parties from the Madhesh plains on the southern border with India. These newly elected governments are struggling to craft new constitutional agreements. In Nepal, Prachanda is seeking to amend the 2015 constitution to appease Madhesi demands. In Sri Lanka, the government is hurriedly drawing up a new constitution, which it plans to finalise before the end of the year and put to a public vote in 2017.

This is a high stakes game, with the future character of the state and its administrative arrangements up for grabs.  At one level this is a struggle involving elected politicians and lawyers, to ensure a fair and legal division of powers and representation. At the same time, below the formal structures and official debates is a multi-layered struggle involving networks of actors animated by the drive to capture, control, and distribute power and resources. Whilst some see this as a battle for a new kind of politics, others view it as a very old game in which new political elites jostle with older established elites in order to gain access to power and resources – in other words it is as much to do with extending patronage networks as democratising the state.

Patronage and new forms of claim-making

These tensions have a strong spatial dimension, as claim-making from the periphery intersects with patronage politics at the centre. For the political parties that emerged from the peripheries of these states, and were part of, or aligned with, the Maoists or LTTE, entering mainstream party politics at the centre has been a disorientating experience; the clear-cut narratives and friend-foe distinctions of ‘justice-seeking rebels’, are replaced by the murky worlds of political coalitions, alliance making and ‘dirty’ patronage politics. Maoists and ex LTTE-aligned nationalists, have found that by renouncing violence and entering ostensibly high-minded debates on constitutional reforms, they have unavoidably been sucked into ‘normal politics’ and deal-making.

This new cartography of power is much harder to navigate than the old war-time landscape.  The new politics involves indeterminacies, blurred zones, surprising alliances, and hybrid institutional arrangements – all of which creates a promising environment for middle-men or brokers, who are able to navigate, find new pathways and make new connections, during periods of rupture or flux. These fixers can jump the synapses between political networks and parties leading to surprising alliances and policy positions. Muslim politicians in Eastern Sri Lanka, for example, have sought to balance the demands of their constituents in the periphery against the need to form coalitions with, and extract resources from, the centre. Madhesi political leaders in Nepal have both engaged with and challenged the central government, tapping into state power by joining mainstream parties then switching allegiances and orchestrating violent protests at the border.

New patterns of claim-making are emerging from the margins. In Nepal, since the signing of the Comprehensive Peace Agreement in 2006, marginalised tribal groups (the janajati) and Madhesi parties have played a decisive role in politics at the centre. In Eastern Sri Lanka, the leading Muslim party – the Sri Lanka Muslim Congress (SLMC) – is being confronted by a more assertive regional identity movement called ‘the Rise of the East’. In Northern Sri Lanka, new groups such as the Tamil People’s Council (TPC) are drawing attention to a range of issues they feel are neglected in public debate about the new constitution such as on-going state-sponsored ‘colonisation’ of the North, war crimes, and the need for a federal solution.

Post-war transitions have led to a re-spatialisation of power.  It has involved the reassertion of the centripetal forces of statebuilding and centralised patronage, as a counterpoint to the centrifugal forces of rebel governance and minority claim-making.  Constitutional talks bring into sharp focus these tensions between centripetal and centrifugal political forces.  These centre-periphery dynamics are made visible in multiples ways – for example, through the creation in Sri Lanka of a constitutional sub-committee for centre-periphery relations, or in Nepal in the initiation of border development programmes in the Tarai.

There is also an important international dimension to this scalar manoeuvring. India’s backing of Madhesi demands was instrumental in the recent blockade and the transfer of power at the centre, whilst China’s support undergirded the Rajapaksa government’s war-time and post-war strategy. Several large Chinese-funded infrastructure projects have been completed in Hambantota, with the goal of reinventing this marginalised coastal region as an international maritime hub and establishing it as a new locus of economic and political power within Sri Lanka. These international forces and the domestic responses to them are continually shifting. Both the new Prachanda-led government in Nepal and Sirisena’s government in Sri Lanka are now seeking to re-configure foreign relations by distancing themselves from the previous regimes’ over-reliance on China.

The primacy of domestic politics?

Notwithstanding these international pressures, what sets Nepal and Sri Lanka apart from many other countries, is that their post-war transitions have been primarily domestic affairs – to a large extent political leaders have successfully kept the international peacebuilding industry at bay.  And this has perhaps helped create the space for vibrant, contentious and unpredictable political encounters between centres and peripheries, patronage politics and claim-making, in the two countries.  In our next blog we will explore in further detail how the changing cartography of power is being shaped by expanding markets and shifting capital flows, as well as by constitutional manoeuvring.