How did studying at SOAS result in me spending three years and counting in Thai prisons?

How did studying at SOAS result in me spending three years and counting in Thai prisons? 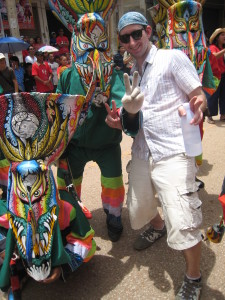 My first thought upon stepping inside the Central Prison of one of Thailand’s troubled Deep South provinces, was to question how I had ended up there. Which were the choices that had led me from a SOAS classroom studying BA Thai and Development Studies to standing there, my sparsely thatched head baking in the hot sun, blinking at the light as I stooped to step from the gloomy antechamber, through the 5’ 5” wicket in the large reinforced steel gate, into the inner courtyard of the prison? Anyone who has walked over an open sewer behind a Thai fresh market on a sweltering April day will be able to imagine the smell that confronted me as four prisoners, chests glistening with sweat, dragged a cart of food waste past me and the other two foreigners who were newly arriving in the prison. It felt a long way from Russell Square in the Autumn of 2007, where a class of six students had sat, chanting initially indistinguishable vowel sounds, under the watchful eye, and attentive ear of Ajarn Vantana.

I was 27 when I started my degree and determined to make the most of my chance to study. Choosing to study Thai with Development Studies gave me a good balance between studying a country I loved and some broader knowledge that would help me ensure my future employability. Not everyone who studies in the South East Asia Department will necessarily go on to work in the region and, whilst the department will teach you numerous transferrable skills, a joint degree provides one way to ensure you get the best of both worlds.

I had begun the degree with a smattering of basic conversational Thai but my knowledge of tones was almost non-existent, and lacking an ear for music I was concerned it would remain that way. Thankfully the course at SOAS has been honed over generations, and within three weeks all six of us were able to repeat and identify the five tones (admittedly not without mistakes), read a short, simple passage, and write most of the more regularly employed letters of the alphabet. Thai is undoubtedly a difficult language to learn and it takes, or at least took me, a lot of hard work to become proficient; but the system is set up to enable you to succeed. On graduation you should have read at least one short novel in class, regardless of whether you study the three-year degree, or choose the extra year abroad. 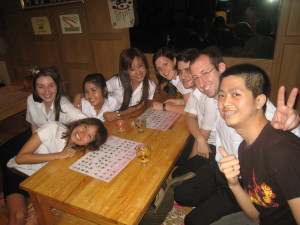 Alex and fellow Thammasat students during his year abroad

After initially choosing to study the three-year BA programme, I switched to the four-year degree with a year abroad in Thailand at Thammasat University, in Bangkok. That year provided me with an opportunity to develop my Thai language skills, and gain an insight into Thai society that you’ll struggle to ever replicate as a traveller. Living frugally on my student loan, I got by without working and enjoyed fully immersing myself in the University experience and beyond. I took the opportunity to volunteer a couple of days a week at the National Health Commission (NHC), in the Ministry of Public Health (MoPH). The NHC took me from Nakhorn Sri Thammarat in the South, to Chiang Mai in the North. It taught me a whole new set of vocabulary and led to my first job in Thailand after graduating. The year abroad was not without its trials and tribulations, but having Ajarn Rachel overseeing from afar meant that we always had a safety net.

On my return to SOAS a quirk of the schedule meant that I had the extreme good fortune of one to one classes with Ajarn Sud for the whole of my final year, that resulted in my Thai developing rapidly under his firm but friendly stewardship.

What I found, and still find, inspiring is the extent to which the SEA Department’s staff are not only experts in their field, but are so passionate about continuing to learn, and to inspire others to do the same. Perhaps my status as a mature student made that element feel particularly important, but almost all the courses I took at SOAS were fresh and constantly updated as the results of new research and well-used sabbaticals came into play. 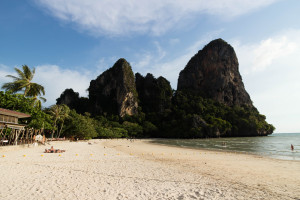 Railay Beach in Southern Thailand, a more appealing location than a Thai prison

With all of that advice and support behind me, why was I being accompanied into a prison and looking back into the smiling but heavily tattooed face of a detainee whose scarring clearly suggested bullet wounds? My first job in Thailand, in the MoPH, helped me develop the professional vocabulary that made me a strong candidate for a position as interpreter with the International Committee of the Red Cross (ICRC), and like two of those who graduated a year after me, that is what I had become. Having been based in the Deep South for 15 months, I now work across the country, but am based in Bangkok. It is fascinating and engaging work, primarily relating to ensuring humanitarian conditions of detention. It is without doubt that the small-class teaching at SOAS, and the exploratory year abroad, were essential in giving me the skills and knowledge that have enabled me to establish myself, join the ICRC, and build a career in Thailand in the four and a half years since my graduation. If you’re considering studying at SOAS, what are you waiting for?

Alex Dalliston graduated with a 1st class degree in BA Thai and Development Studies in 2011. He now works as a Thai Speaking Delegate for the International Committee of the Red Cross in Thailand. He is also studying back at SOAS, a long distance Masters in Global Diplomacy.