What Does Trump Mean for Sub-Saharan Africa?

What Does Trump Mean for Sub-Saharan Africa? 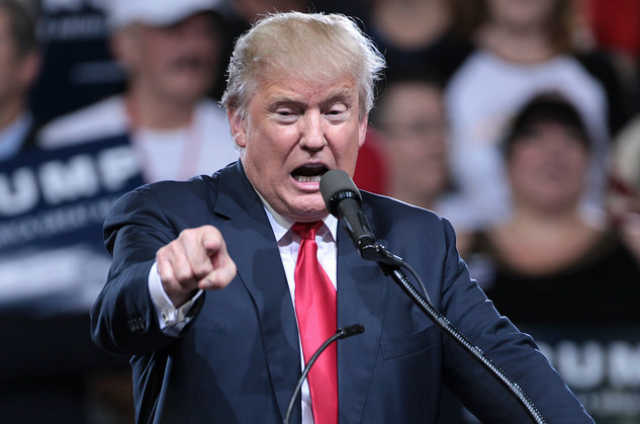 Michael Jennings is a Head of Department and Senior Lecturer in the SOAS Department of Development Studies. His research interests include the politics and history of development processes in sub-Saharan Africa; governance, civil society, non-governmental organisations and faith-based organisations; and social aspects of health in Africa.

On the scale of some of the things that emerged from the mouth of now US president-elect Donald Trump on the campaign scale, allegedly calling the Kenyan athletics team ‘frauds’*, and mispronouncing Tanzania, hardly counts as anything serious at all. We have few clues as to what Trump thinks of the region, and how he intends his administration to engage with its countries and leaders. But are there any indications, even at this stage, of what a Trump presidency might mean for sub-Saharan Africa and development?

It was probably inevitable that Africa would feature less prominently no matter who replaced Obama. Although Hillary Clinton, through her role as Secretary of State, and the work of the Clinton Foundation in Africa, certainly has closer ties and a more detailed understanding of the region.

The return of the nativist

The big political story of 2016 has been the rise to victory of the nativists, whether in the form of Brexit in the UK, the physical and ideological barriers put up on Europe’s borders in the face of the mass movement of people, or, now, the victory of Trump. Whatever the reasons for why people voted for him, they have chosen someone whose aspiration appears to be the creation of a more isolationist, inward looking US, one less concerned with the international stage, and more concerned with domestic politics and economy.

There will be some who welcome this, after the foreign policy adventures of the last couple of decades. They would be wrong, however. An internationally engaged US does not have to be a militarily-engaged one. And yes there will always be charges of hypocrisy against any major power that seeks to raise issues of human rights, respect for international law and so on with other powers. But the dangers of a non-engaged US are worse.

The main issue, and the one that will have the biggest potential impact on Africa, is Trump’s climate-change denying, and the possibility that he will now ditch the, albeit imperfect, Paris Agreement. A US withdrawal on this would have catastrophic consequences for global cooperation in tackling what is one of the biggest challenges facing sub-Saharan African countries and the poor within them.

A more isolationist US is also likely to focus what external attention it bestows on a few key areas: Russia, China, and the Middle East. Sub-Saharan Africa will slip further down in US priorities, with consequences beyond just the diplomatic circle. If aid becomes increasingly linked to US strategic interests, not being one of those strategically-important areas could see aid spending diverted away. Funding for multi-lateral organisations could suffer as America seeks to do more on its own through bilateral agreements, and with those strategically important regions. Almost certainly, the securitisation of aid will be given renewed impetus, with efforts to tackle poverty, control epidemic disease, understand the drivers of mass migration, efforts to negotiate peace in conflict-torn societies, seen ever more through the prism of US security interests. Sub-Saharan Africa will increasingly be noticed by the US only when it is of importance or use to the US (not a new trend, but one likely to be exacerbated far beyond the current form).

In 1984, President Reagan instituted the Mexico City Policy (also known as the global gag), which placed a requirement upon all NGOs and other organisations received US federal funding to refrain from ‘performing or promoting’ abortion services. Since then, the global gag has become a political football: repealed by Democratic presidents, brought back by Republicans. Given Trump’s stated position on abortion, and his support base, it is almost certain that the policy will be back on the table.

This is disastrous for efforts to promote not just sexual and reproductive health, but public health more widely, across sub-Saharan Africa, as the evidence has shown from its previous iterations. Quite apart from the issue of whether abortion is a human right, and essential for the health of women, many of the organisations that provide abortion services, or even just advice on where to access them, are also providing other vital health services. In some cases, they may be the only health centre in a particular area. Removing funding from that organisation does not just stop abortions (actually, that’s the one thing it doesn’t do – it just makes them more dangerous); it prevents wider health services from being delivered too.

Funding for HIV and AIDS was treated separately from the Mexico City Policy under George W Bush’s administration, but the restrictions imposed nevertheless had an impact on the ability of organisations to function effectively and provide all the services necessary for a strong and effective anti-HIV and AIDS programme.

So some things we do know already, when the global gag is reinstated (as it is almost certain to be): abortions will not be reduced, but many more women will have serious medical complications and will die from an increase in the number of unsafe abortions; many health service NGOs will find their ability to provide services compromised, whether in terms of being able to offer a full range of services and advice, or even being forced to stop completely due to a drying up of funding – or take the Faustian pact and give advice and a service they know is flawed and incomplete.

In a region with such high maternal mortality rates (830 women dying every day due to preventable causes); with such high numbers still of new HIV infections (around 1.4 million every year), the Mexico City Policy is not just a terrible policy, it is a disgraceful piece of ideological nonsense that just ends up hurting and killing the already vulnerable and marginalised.

A ban on Muslims?

As with so much of what Trump says, you have to be sceptical that even a third of what has been promised will make it into the White House (although even a third of some of the bile that has emerged is a horrifying prospect). And his once-mooted idea of banning all Muslims from entering the country already saw significant roll back almost straight after it was announced.

However, rhetoric matters, and there would appear to be little doubt that perception of Islam, of Muslims, and of countries in which Muslims are the dominant religion or a significant one will worsen, and many will have plenty to worry about from a Trump presidency. At the most basic level, will gaining visas become harder for those wishing to travel to the US; and will Muslims transiting through the country face increased monitoring and even restrictions? Will African countries with large Muslim populations be treated less favourably in aid, trade and other deals than others?

More insidiously, how will US perceptions of Africa develop over the next five years? There has often been a lack of nuance in the way sub-Saharan Africa is perceived globally. This is not likely to change, and there is every chance that negative stereotypes, promulgated by the administration, or not robustly challenged, will flourish. The picking of Alt-Right standard bearer, Steve Bannon, as a key advisor, a person accused of racism and who edits the website Breitbart – a site accused of promoting white supremacy, homophobic and sexist ideologies – cannot be good news. And thus far new appointments have not given much hope for alternative voices.

So what can sub-Saharan Africa expect? At best, perhaps it will spend the next four years being largely ignored, not loved but neither suffering directly from policies emerging from some of the rhetoric and ideology that have been a hallmark of the campaign. But whether or not Africa is a focus for the Trump administration, other policies and narratives about certain groups, religions and ideologies will negatively impact upon the region. The idea that ‘Africa’ (and I doubt it will get much more nuanced than that) is a haven for terrorists and anti-Americanism may well flourish in Republican circles. Trump’s supporters champion his excellence as an investor and businessman. Perhaps that expertise will lead to increased investment across sub-Saharan Africa. But his record suggests caution there: is that the kind of business investment the region wants or needs (Scotland, like to advise on that?).

My advice, hunker down, and pray that mispronouncing your country’s name is the worst thing that happens.

* Given the extent of false news stories in this US election, I can’t be sure this actually happened.

** This did actually happen, but to be fair if we are going to start a list of people who pronounce Tanzania, Tan-zay-nee-ah, it’s going to be a long, long list.