Decolonising the curriculum: what’s all the fuss about?

Decolonising the curriculum: what’s all the fuss about? 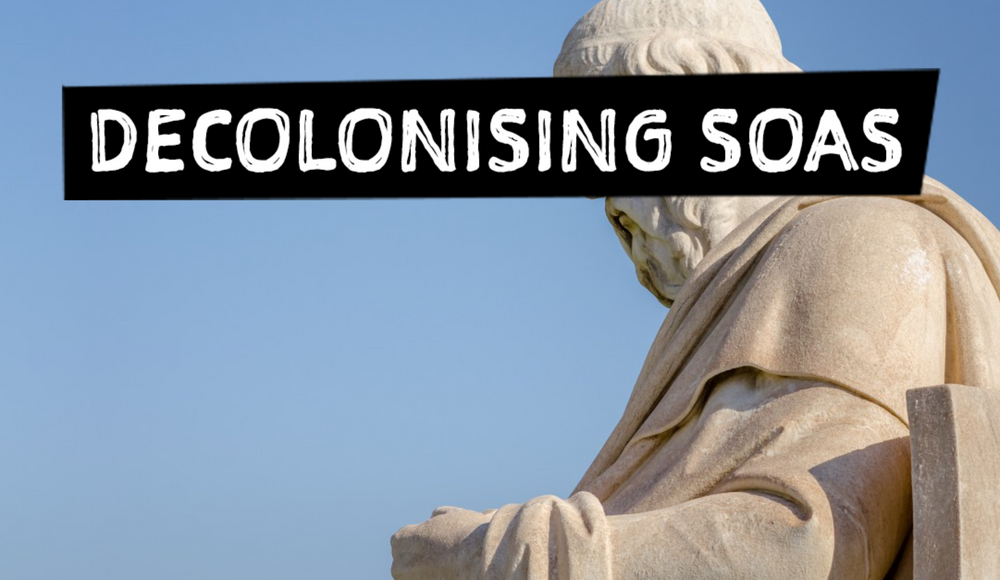 You may have recently read false news reports that SOAS students have called for the removal of white philosophers such as Plato and Kant from their reading lists. It bears repeating that these reports are untrue – they are calling for a greater representation of non-European thinkers, as well as better historical awareness of the contexts in which scholarly knowledge has been produced. This is part of a wider student campaign to ‘decolonise the university’, which includes discussions around the curriculum and teaching, support and outcomes for BME students, terms and conditions for campus workers and other aspects of university life.

First, ‘decolonising the curriculum’ asks us to look at our shared assumptions about how the world is. It is accepted in many disciplines that in the past, assumptions regarding racial and civilizational hierarchy informed a lot of thinking about how the world worked, what was worth studying in it and how it should be studied. Such assumptions also informed and justified the expansion of colonial rule in Asia, Africa and the Middle East until the mid-twentieth century.

Why would anyone want to ‘decolonise the curriculum’, and what does this mean for academic study?

Whilst many of these assumptions have been challenged with the dismantling of colonial rule, many persist in public discourse as well as academic study. For example, whilst many may not call societies ‘backward’ explicitly today, many theories and practices of development depend on this very assumption. Is this justified? What else does this assume? One interpretation of ‘decolonising the curriculum’ means interrogating such assumptions, models and frameworks for these specific biases. We have been doing this for a long time in different fields, but understanding it as ‘decolonising the curriculum’ connects it to this wider sphere of activity.

Second, ‘decolonising the curriculum’ asks the crucial questions about the relationship between the location and identity of the writer, what they write and how they write about it. Would we find it acceptable if the writings and teachings on the situation of women and gender relations were done almost exclusively by men? How would this influence the kinds of perspectives presented? Similarly, is it acceptable if writings and teachings about international regions or global affairs are done almost exclusively by writers from or based within the West? How does this influence our understanding? If we think that there is some kind of a relationship between position and perspective on an issue, and we want to broaden our understanding through engaging with more perspectives, we need to diversify the sources we engage in our scholarship. Again, this is something that has been underway for some time within SOAS and beyond it – our teaching on World Philosophies and World Englishes are good examples of these trends. Combined with the previous point, there is a powerful case for why a diversified curriculum enables more knowledge and more intellectual rigour.

Third, ‘decolonising the curriculum’ asks us to think about the implications of a more diverse student body in terms of pedagogy and achievement. Because we live in a society marked by structural inequalities of different kinds, as educators we must work hard to give our students equal opportunities to flourish and succeed. This includes defining and dealing with racism as it is woven into different aspects of university life. When BME students report a sense of alienation from particular topics of study or dynamics in the classroom, we have a duty to address this through dialogue amongst teachers and students.

Why would anyone want to ‘decolonise the curriculum’, and what does this mean for academic study?Although at SOAS our BME attainment rates are significantly better than the UK average, racialised attainment gaps anywhere are not an acceptable part of higher education. Dealing with such gaps does not entail compromising academic standards, abandoning academic freedom or avoiding controversial topics, as much of the coverage would have you believe. Nor does it involve taking everything that is said at face value. Rather, it involves cultivating an environment in which all of us can have an honest, respectful and rigorous discussion about what is happening, how it can be set right and what that entails. In doing so, we need to apply precisely the kind of skills that we seek to cultivate in universities – intellectual clarity, evidence, courage, openness to new ideas – and a commitment to an education system that works for all.

‘Decolonising the curriculum’ can mean many things and is not something that happens overnight; it requires a sustained and serious commitment within the institution and across the sector. We might also remind ourselves that contestations over the politics of knowledge are as old as universities themselves, and in this sense the present student campaign is itself a manifestation of that fusty old academic tradition – to challenge received wisdom, to ask questions about society and to generate the insight needed to change the world.

Dr Meera Sabaratnam is Senior Lecturer in International Relations and Chair of the Decolonising SOAS Working Group at SOAS, University of London.

First published on the SOAS Blog