In June a workshop took place with financial help from the Decolonising SOAS Public Engagement and Outreach Fund. Below is the report from The Asociación de Madres y Padres Latinos en UK, the group awarded the money to hold the workshop.

Description of the Participants:
The Asociación de Madres y Padres Latinos en UK was founded in September 2017. The Asociación seeks to be a space where parents can participate to solve many of the concerns they have when they arrive to the UK. For parents, when they think about their arrival process, they become concerned regarding issues like language, adaptation and an overall feeling of loneliness. Faced with all this, the Asociación seeks to be a place of encounter for every Latin American family living in the UK. The participants were 10 women who are active members of the Asociación. All of them are mothers, aged 20-45 years.

A decolonial approach
The Asociación is still in its early stages of conformation as an independent organization, and its members are still learning to engage and lead the organization in relation to their needs and life experiences as migrants in the UK. To contribute to this early stages of organization, a series of film workshops were develop, using a Pedagogía Decolonial approach (Walsh, 2003), as a way to discuss together with the participants what is important for the Latino community in the UK. Through the workshops the aim was to contribute in the understanding of how community-based practices challenge the power relationships and possibilities of action of Latin American migrant mothers and their families in the UK.

The Workshop
The main intention of the workshop was to evoke the creative potential of and provide the participants with audiovisual tools in an empowering process to bring attention to themes that mattered to them. Other goals included to let the participants experience the connection between creative and critical thinking, to recognise that interpretation involves and validates one’s own experience, to appreciate the particular skill set of each art form and to develop stamina for the observation and attention to detail. From our perspective all goals were achieved.

The first workshop centered around the introduction to storytelling and other narrative techniques: How do I tell a story, what themes can I explore? Each woman told her story of arrival in Europe and the UK. After talking about story arcs and the main components of storytelling (The Hero’s Journey after Christopher Vogler), the participants pitched the themes they wanted to talk about in their short film. The main themes the participants wanted to explore evolved around “Life in London”.
* Differences of your home country and living in the UK
* Challenges of a life in London
* Language
* Money problems
* The importance of support groups and organisations like the Asociación de Madres y Padres Latinos en UK

The second and third workshop centered around different interview techniques and managing the technical part of making a short documentary. The participants interviewed each other with self-written questions. The interviews were filmed with smartphones and the audio was captured with lavalier mics that can be attached to smartphones. Moreover, participants captured moments of London’s street life on their smartphones and put them together to create an audiovisual work of 5 Minutes, thereby discovering that they have something meaningful to say about their own or other people’s lives and the techniques to tell the stories as they want to.

Our short workshop series ended with a family launch of the film created which was titled by the participants as “Mujeres con Coraje (Women with Courage)”. 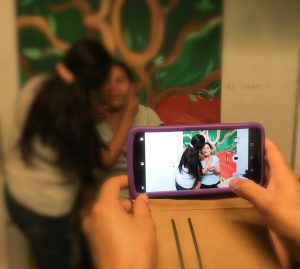 Workshop Facilitators
Karoline Pelikan is an award-winning Peruvian filmmaker living in London. She studied documentary filmmaking in New York, Lima and Madrid. After founding her production company Pelikan Pictures, she began producing short documentaries capturing compelling anthropological stories. Her interactive project Inside Grief won the 2015 TalentDoc award for outstanding concepts in multimedia storytelling funded by the Goethe Institute. Her short documentary October 1st was screened in international film festivals in Mexico, Norway and Peru. Currently, she works on her first feature documentary Dije No (I Said No), an audiovisual study of the extent and nature of gender violence in Peru. As a filmmaker in a predominantly male-dominated industry, it is Karolines personal concern to
get more women involved in the medium of film to address important social issues.

Javiera Sandoval-Limarí is a primary school teacher, specialised in year one and two. Currently, she is PhD candidate at UCL-Institute of Education in the Culture, Communication and Media department. Her research interest are in the intersection between literacy as a social practice and migration in Chile, specifically with the Haitian community in the country.

Sara Joiko is a sociologist and a PhD Candidate at UCL-Institute of Education. She has been awarded a Becas-Chile scholarship for her PhD, which aims to acknowledge the schooling experience of Latin American migrant families in the Chilean context. She has worked as a research assistant on education and has a vast experience trying to link her academic interests on education policy, family-school relationship and migration, with her communityvolunteer work at different social organizations.

We want to thank the Indoamerican Refugee Migrants Organisation (IRMO) who kindly provided us with a space to do the workshops, and the Decolonising SOAS Engagement and Outreach Grant for funding this project.