Home/Students/Domesticating Otherness: The representation of Arabs in a Chilean Telenovela 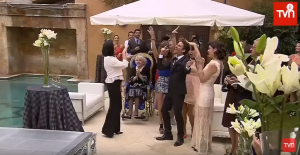 Latin American telenovelas and their romantic and carnivalesque storylines have turned out to be one of the most watched programmes in the region, as well as the most exported televisual products globally. The melodramatic narratives appeal to the family, thus proving to be a prime tool to address the nation as well as diffusing cultural norms, “family values” and mass consumerism internally.[i] In contrast to other Latin American telenovelas, Chilean ones are not as widely exported, thus they use localised systems of reference and permit more finetuning of content for Chileans. This feature makes them an interesting prism through which representation of cultural minorities can be analysed, especially considering the liberal model of “multiculturalism” espoused by Chile, where rapid integration in the “mainstream” is sought through “universalized values” of the nation core.

Matriarcas [Matriarchs], a typical telenovela aired in 2015 by state-broadcasted TV channel TVN, is about the Santis Nazers, a family of Arab descent.  In a key episode, Diana, the matriarch, discovers that she has 33 grandchildren because Alexis – her only son – was a sperm-donor. In the subsequent quest to find Diana’s grandchildren, the show covers controversial topics such as diverse types of motherhoods and paternities, and the different social relations that arise from a somewhat unconventional and taboo topic of artificial insemination in the Catholic country.

The references to the Arabic background of the family are scarce and only appear in the form of quaint and picturesque folkloric practices, such as traditional Arab music, thus ossifying the culture and fixing it in interpretative templates which render them easily recognisable in the liberal “multicultural” system of representation.[ii] Further disregard for a comprehensive representation of cultural groups is noticeable in the homogenisation of the Arabs in the show, whereby particularities of Lebanese, Syrians and Palestinians diasporas are obliterated. This conforms to the portrayal of the Arab immigrants as a homogenized group who arrived in Chile during the late XIXth century and mid XXth as racially inferior to Western European immigrants. The most telling example of this construction of national identity based on racial hierarchisation in this telenovela is the depiction of the communities as exotic outsiders, when for example,  Alexis admits to his upper-class Chilean girlfriend that his family “is not the most normal one” (episode 1). This serves to establish a hierarchy of cultures where “Chilean-ness” is a continuation of Spanish colonization.

Considering the limited reference to the characters’ Arab descent is precisely what makes Matriarcas an interesting study case: why is this specific cultural minority chosen to represent such a controversial issue? I argue that the first reason is sensualisation of “Arab culture”. Appealing to the intertextual element of the telenovelas – where there is cross-referencing between previous programmes, characters, and actors, Matriarcas refers to a previous period drama by the same channel in which the Arabs are depicted as the newly-arrived exotic and erotic immigrants. The link is further highlighted by Claudia di Girolamo who plays Diana, the mother in the show, stating in an interview that she conceived the role as highly sensualised.

Closely related to the latter is the issue of artificial insemination which is associated in the show with an external other whose high degree of sensualised exoticness permits transgression against local Catholic traditions. However, to localise this transgression, there needs to be a local “receptivity. Accordingly, alongside the sensuous figure of Alexis, the sperm donor, there are virtuous, self-abnegating, obedient, and chaste mothers, who have conceived artificially. Therefore, alterity is used to pose progressive ideas that otherwise would not be as fitting “Chilean-ness”.  Thus, the telenovela is simultaneously appealing to the “mainstream” through the idealised “virtuous” women.

Telenovelas are so much more than melodramatic entertainment. As seen with the case of Matriarcas in Chile, they can project and perpetuate racialised representations of cultural minorities, hence playfully – but dangerously – domesticating their existence.