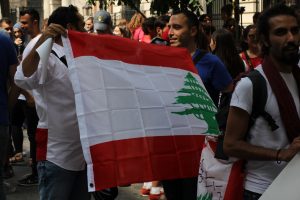 On October 17 a wave of protests erupted in Lebanon against corruption. Almost half of the Lebanese population took to the streets demanding an end to corruption, transparent economic policies, social justice and protection of the environment. Slogans, such as ‘down with the sectarian confessional regime,’ mingled with calls for the resignation of all state officials whose practices were regarded as corrupt and who have been in control for almost 30 years. The police and army were summoned to the streets to contain the protests and thugs were sent into the protesters’ sit in camps in major squares in Beirut to cause mayhem and spread fear, but that did not deter the protestors.
With protestors continuing to be defiant to force, the Lebanese authorities along with the main political parties initiated a campaign to spread fear through disinformation and the dissemination of fake news, particularly in social media platforms, which reached unprecedented proportions over the past 23 days. False news and reports suggesting the protesters were supported by foreign money to de-stabilise Lebanon have become a dominant theme. One of the most prominent stories circulated during the first week of the protests was a story allegedly linking what is happening on the streets in Beirut with a Serbian organisation funded by US money called OTPOR. One of Lebanon’s TV stations, owned by the Lebanese President’s party, the Free Patriotic Movement (OTV), even produced a news package ‘proving’ that the protesters were carrying out a foreign conspiracy against Lebanon. The TV package featured sound bites from the founder of OTPOR Srdja Popovic taking credit for sponsoring protests in different parts of the world including Tunisia, Egypt and Lebanon. The package also referred to the fact that OTPOR had been funded by the Hungarian-American billionaire and social philanthropist George Soros.
The package and similar short video clips were broadcast on air and circulated in social media platforms in order to discredit the protestors and spread false claims that hidden foreign hands had initiated and directed the protestors as part of a US plot to spread chaos and spark a civil war similar to the one in neighbouring Syria. The claims went viral on social media, prompting many Lebanese to question the motives of the protests. One prominent practice this campaign used as evidence to the alleged conspiracy, was the erection of a large statue with a raised fist in the middle of Martyrs Square in Down Town Beirut, which confirmed the connection to OTPOR. The raised fist had been used by the Free Patriotic Movement as a fist of ‘determination to change’ in their political campaigns – indeed, the movement’s leader Gibran Basil concluded a rally in support of the President of Lebanon Michael Aoun using a raised fist.
A simple google search traced the images and soundbites used in a documentary produced and posted on YOUTUBE in 2011 and the protests/revolutions Popovic had claimed sponsoring in those clips circulated are those of the Arab Spring in 2011 and the Cedar Revolution in Lebanon in 2005. The simple search revealed that OTPOR had seized to exist as an organisation in 2013 and that Popovic had started publishing guides on non-violent struggles/revolutions by establishing a training centre in Belgrade called Canvas. However, Popovic seems to have adopted almost every non- violent forms of struggle. In an interview with the Guardian newspaper, he criticised the opposition in Syria for taking up arms against the regime, even though Syria had been one of the countries he claimed OTPOR had sponsored or supported protestors.
Fake stories could be built by editing bits and pieces from old stories and pass them on as new in the aim of deceiving and manipulating public opinion. The OTPOR story is not the only recycled story that had been circulating. Disinformation seems to be one powerful tool that the authorities and political elite in Lebanon are hanging onto in order to manipulate fears and emotions and as a driving force in demonising and undermining the protesters and their legitimate political, economic and social grievances. The danger here is that the fierce disinformation campaign also aims at spreading anxiety about Lebanon plunging into a sectarian civil war that could be more devastating than the civil war between 1975 and 1990. While different tools have been used to spread fake news, social media platforms have become the main tools in their dissemination. The Lebanese protestors remain on the street and remain resolute, but their resolve can only be strengthened by awareness of the dangers of fake news and misinformation and by a counter-campaign to expose the plot against them. Sometimes a simple quick internet search is the key to countering disinformation assaults.