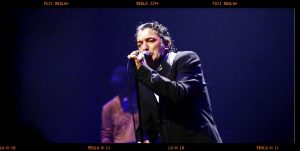 “Rachi Taha @ THE BARBICAN 2013 PART OF SHUBBAK FESTIVAL” by wheelzwheeler is licensed under CC BY-NC-SA 2.0

The summer is upon us and consequently, festival season. From June 28 – July 14, the fifth biannual Shubbak Festival will take place all around London. The full program consists of Arab artists in diaspora and around the Arab world within the visual, literary, musical and performance realms.

As one of the most prominent Arab cultural festivals in the world, Shubbak stands as a unique spectacle. Its size (drawing over 50,000 attendees), diversity of artists and performances, and high profile venues around London all mark Shubbak as a dynamic point of diasporic encounter. For the past eight years, the festival is and has been a site for internal and external negotiations of what constitutes of cutting edge Arab cultural production within a developing transnational and cosmopolitan framework.

From its origins in 2011 as a summer event organized by the Mayor of London, (at the time Boris Johnson), the festival was then expanded and funded principally by the AM Qattan foundation in 2013. The timing was auspicious. External western interest in the Arab cultural sphere paralleled internal momentum from the Arab diaspora and Arab cultural organizations to get involved and reclaim the festival as space to counter negative or simplified public conceptions of the term Arab.

By focusing on the festival’s media and programs as well as interviews from those involved, a clear developmental pattern appears from the language and the methods that Shubbak uses to situate itself and the participating artists. In 2013, the program emphasized the multinational diversity that exists under the broad and often misused term “Arab,” reproducing a type of multicultural discourse.

The 2015 program shifted to rely more heavily on the term Arab as a transnational label for events and artists. The language and images linked the term to a cosmopolitan structuring of the festival. Specifically, Shubbak is mentioned as a free, diverse platform for discussing and presenting contemporary Arab identity that is cosmopolitan and in diaspora.

In the 2017/2019 festivals, the programming concentrates on pushing boundaries, and bursting open impressions that surround Arab identity both from within and outside of the Arab community. Both the inter-community and external perspectives are relational and operate ambiguously. Questions certainly remain, especially those of class and access to the art that is presented in Shubbak in local contexts and how influential Shubbak is on an international stage. Yet, for those interested in diasporic media practices and cultural production, Shubbak as a transnational cultural festival provides a rich and complex media case study.