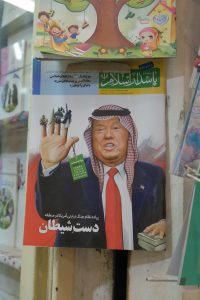 “Kerman, bazaar” by hermien_amsterdam is licensed under CC BY-NC-SA 2.0

Both the US and Iran are reluctant to make the first move towards talks and if it remains that way a third-party should initiate contact before tensions reach a boiling point.

The US President Donald Trump vowed to destroy the Iran nuclear deal as early as his campaign days in November 2016. That wish may be granted very soon as the rest of the signatories to the Joint Comprehensive Plan of Action (JCPOA) and its guarantor, the United Nations, appear to be powerless in the face of US political, economic and military pressure on Iran.

Trump’s withdrawal in 2018 from JCPOA is in contravention of the UN Security Council resolution 2231.

The US has now sent its naval strike group and a bomber task force to the Persian Gulf to threaten Iran. Its unilateral sanctions have already pronounced an economic war on the people of Iran. President Hassan Rouhani has warned the people of Iran to brace for further economic hardship.

These developments underline the failure of international mechanisms for upholding multilateral commitments or at least preventing their collapse.

There is now an urgent need for mediation if another conflict in the region is to be averted as today’s incident in the Persian Gulf indicates.

Iran’s top military brass is preparing for war – the National Security Council is retaliating with a gradual return to uranium enrichment if solutions are not found “within the next sixty days.”

Iran has broadly stuck to the letter of the JCPOA and is blaming the EU for its failure to counteract the US measures.

It could be argued that it was not just the fault of the EU or the lack of foresight on the part of other signatories, but rather the pressure from hawks in both the United States and Iran that insisted on defeating the JCPOA.

Efforts in Europe had gained consensus to use the special-purpose vehicle (INSTEX) to keep trade between Iran and Europe operational without relying on cross-border financial transactions. But hardliners in Iran’s parliament did not adopt its main precondition: the Financial Action Task Force (FATF) which is the anti-corruption, anti-money laundering and anti-terror financing legal safeguards.

It was also Iran’s hardliners who pushed for the testing of Iran’s missiles just as President Trump came to power. Although Iran’s missile program was not part of JCPOA, the missile tests were provocative. They are now calling for scrapping the deal.

In the US administration, hawks are pushing for war. The US National Security Advisor John Bolton has long been calling for “bombing Iran” and for “regime change”.

When asked whether he was planning a coup in Iran, the US Secretary of State, Mike Pompeo, did not deny it: “Even if we [were], would I be telling you guys about it,” he exclaimed.

The rulers of Iran, including Ayatollah Ali Khamenei and the top officials of the Revolutionary Guards Corps (IRGC), have also never stopped calling the US the Great Satan or threatened war and reprisals.

So, what scenarios could we expect?

Both sides know that they are not in a position to go to war. The US has had too many recent unsuccessful wars in Iraq, Syria, and Afghanistan. In any case, the deployments in the Persian Gulf are being spun as more of a show of force scheduled long ago.

Sable rattling on both sides has not brought any results, and Iran is highly likely to return to uranium enrichment.

President Trump says he doesn’t want war with Iran. Since July 2018 he has been calling for talks indicating that his campaign of maximum pressure is for getting a “new” deal.

” I would like to see them call me,” Trump told reporters on Friday. The hashtag #CallTrump was soon trending amongst Iranians.

So what is deterring the two sides from talks? The details of demands are long and important, but they are not the dealbreakers.

Two elements are stopping both sides from coming to the table: the first is the hawks in both administrations are blocking talks, and the second is the unwillingness to take the first step.

That is why mediation through the United Nations or a neutral third party would significantly enhance a chance for talks. It would help avert war in the region and stop Iran from returning to nuclear activity. Oman provided such mediation during the nuclear talks, and Switzerland is also an option.

Alternatively, seasoned diplomats aware of the main thorns in the US-Iran relations could be asked to mediate on behalf of the UN or the EU encouraging direct talks.

For Iran, talks are the only step likely to lead to a reduction in US sanctions, and an increase in trade and investment – and some respite for their battered economy.

As for Trump they would bring that desperately needed international success story on the eve of his presidential campaign for a second term.