“Children Caught in the Crossfire: Reflections on the Peshawar Tragedy” by Navtej Purewal

Home/Conflict, General, Pakistan/“Children Caught in the Crossfire: Reflections on the Peshawar Tragedy” by Navtej Purewal

“Children Caught in the Crossfire: Reflections on the Peshawar Tragedy” by Navtej Purewal 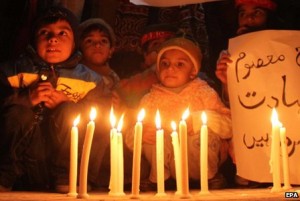 Attacks on school children by the Taliban in Pakistan are a familiar news item. The bewilderment that has been felt across the world highlights how complex the picture really is. The brutal attack on the school in Peshawar on the 16th of December 2014 in which 132 children and 9 staff died two years after the shooting of Malala Yousafzai on her way to school in October 2012 highlights the intricate canvas which Pakistan provides for past and present battles for territorial and ideological dominance in the region.  Peshawar is not isolated when we look at the broader decline that has taken place in Pakistan. The  targeting and killing of Christians, the obstinately yet ambiguously placed blasphemy laws which exclude, stigmatise and silence, and the Zina Ordinance’s  disenfranchising impacts upon women have resulted in a deep decay of the Pakistan state’s accountability contributing to a civil society increasingly being governed by summative justice. The Taliban in all of its imaginations and machinations is just one of these purveyors of summative justice which highlights how dire the situation really is. The public outcry and grief being felt is not just about the children and teachers who lost their lives in the attack in Peshawar. People are mourning the loss of the past, present and immediate future in which human lives hold value in a country supposedly created to assure the safety, protection and dignity of its citizens. It is no wonder that children have been targets within these battles along impermeable fault lines between local/tribal sentiments, the Taliban’s mobilizations as an alternative, and the Pakistan military’s position of both dominance and brokerage. Summative justice, retributive violence and the militarization of the region assure that no prisoners are taken.

Less highlighted by the international media is the fact that systematised attacks by the U.S. government using unmanned aerial vehicles have been assaulting the Federally Administered Tribal Areas in Northwest Pakistan along the Afghan border since 2004. This ‘drone war’ which has taken hundreds if not thousands of lives, of which it is estimated at least 1/3 have been children, is at the heart of the troubles in the region. The retributive cycles of violence require a ‘chicken-egg’ analysis rather than the rudimentary Talibanisation picture in order to consider how the canvas has been painted and can possibly be repictured. The C.I.A. controlled unmanned aerial vehicles do not decipher between children and adults, and the local sentiments show a vociferous and growing hatred of these drones and, by default, contribute to an extremely negative view of the United States. Further to this, despite past and present Pakistani Prime Ministers denouncing the drones, there is much speculation, in particular by people in Waziristan and the northwest areas, as to whether the drones are actually being administered with approval of the Pakistani army. The Taliban has capitalised upon the local sentiments which are critical of both the U.S. and the Pakistan military. While the Taliban is widely and popularly acknowledged as presenting a reactionary and regressive alternative, the Pakistani state and the military have shown their complicity in the on-going assaults on the region.

In light of this backdrop, while Malala’s shooting has been widely circulated as an attack on liberal human and girls’ rights, the Peshawar tragedy poses the chicken-egg question somewhat differently. The military is an implicit part of the dominant ideology and power apparatus in contemporary Pakistan. It is neither an abstract nor a removed entity. From the elite localities called ‘Defense’ in the cities of Lahore, Karachi, Peshawar and Islamabad, to the exclusive member clubs and schools, the concept of ‘Defense’ in Pakistan has connotations of domination, elitism, and centralized state power which wields its arms as and when assertion is required. The Federally Administered Tribal Areas, over the past decade, have posed the threat of ‘Talibanisation’ to both the Pakistani state and military, hence the numerous peace accords and talks which have resulted in a fine brokering of ‘peace’. The attack on the Army Public school in Peshawar is an addition to the litany of lives lost in Pakistan, caught in the crossfire and showing that in such fierce battles no distinctions are made between children and military targets – from all sides.