Results and Trends IV: The difference that Religious Community Can Make?

Results and Trends IV: The difference that Religious Community Can Make?

Mavelikkara is a Hindu and Christian area; I met almost none of Alappuzha district’s 10% population who are Muslims during my 1990s fieldworks. (To round this out, I am beginning to make connections in the nearby market town of Kayamkulam, as I continue my return visits to Travancore). Calicut is a town with a strong Muslim community (40%) and it borders onto the district of Malappuram, where Muslims make up around 70% of the population. Malayalis and visitors alike recognise clear differences in the public culture, social norms and overall feel of these two spaces, as well as attributing some of the migration differences between south and north Kerala (Travancore and Malabar) to different practices within the different communities.

Districts of Kerala. Calicut / Kozhikode is in northern Malabar, while Maveilikkara is in Alappuzha, southern side Travancore.

Hindus who spoke to me very often attributed the success of Calicut (and neighbouring Malappuram and Kasaragode district) migrations to traditions of solidarity and mutual help in the Muslim community. Hindus drew negative comparisons between their own community – which they painted to me as riven by caste and as permeated by strong norms of hierarchy, status rivalries and competition between families – and what they perceived as a more egalitarian and more co-operative ethos at work among Muslims.

These stereotypes proved to have some grounding in reality, when the Mavelikkara migration stories I collected threw up more people who were reliant on professional brokers or paid intermediaries (sometimes with catastrophic outcomes), as compared to large numbers of Calicut Muslim migrants who told me that they had gone to the Gulf initially on visit visas – invited to stay with free board and lodging for one month by family or friends – in order to make direct job searches. On my visits to the Gulf, I witnessed mentoring, financial and practical support at work among Muslims, who entered widespread and dense supportive networks. 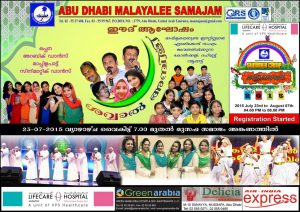 All Kerala’s communities have formal associations in the Gulf; informal personal networks and support vary.

The story among Christians is more complicated, in that both tendencies are at play. There, I encountered dense networks and a sense of community belonging, with substantial practical support and information-sharing at work; but the community is also splintered between many denominations, while solidarity or networking was sometimes hampered by preoccupations with relative status or success.

As I write, I will be working to think through the differences made by class background, district provenance, religious community, family migration status and more. The stories I’ve gathered will help round out some of the findings being made by REALM researchers who are working at macro-scale and giving us the big picture. For India, these include Irudaya Rajan’s several ongoing studies of Gulf migration, Hannah Bruckner’s work on Malappuram women, and Nikhar Gaikwad‘s upcoming work on strategies for entrance into Gulf migration of India’s North-Eastern region. See the full list for details of projects connecting the Gulf into Bangladesh, Philippines, Sri Lanka, Sudan, Nepal and Pakistan.

And yes – we’re all talking to each other. Sharing methods, insights, research design challenges and findings.