Guest blog by Rachel Dedman. Rachel Dedman is an independent curator and writer based between Beirut and London. Current and recent work include projects for Ashkal Alwan (for Home Works 8) and Sursock Museum, Beirut Art Fair, and Nadim Karam, all Lebanon; Kettle’s Yard, Cambridge; the Tricycle Theatre, London; and the Jerusalem Show IX. For five years, Rachel was curator at the Palestinian Museum, Ramallah, where she developed three exhibitions and authored two books on the politics of Palestinian embroidery, textiles and dress. Rachel is co-editor of polycephaly.net, and one third of Radio Earth Hold, a collective supported by the Serpentine, commissioning radio broadcasts from artists. Rachel studied history of art at St John’s College, Oxford, and was the Von Clemm Postgraduate Fellow at Harvard University, specialising in contemporary art from the Middle East. She is currently a Forum Fellow at Art Dubai.

Invited to address the attendees of the London International Development Centre Migration Leadership Team’s Global Migration Conversation in Beirut from a creative, curatorial perspective, I was asked to engage with some of the following questions:

Taking gender, labour, class and commodity as key themes, my research examined how embroidery was practised, traded, and worn historically, and invested in understanding how this history affected the nature of embroidery’s politicisation after 1948. My work charted the role of embroidery and clothing in the visualisation and performance of Palestinian nationalism after the Nakba, through the work of artists, graphic designers, exhibition makers, musicians and dancers—a process which I argue is fundamentally reliant upon particular ideals and images of the female body.

I was also very interested in embroidery’s transformation into a product for sale in a global marketplace, and the nature of its circulation as a commodity. The research placed under particular critical scrutiny the NGOisation of embroidery, and the ethics of its production in the name of female ‘empowerment’.

Migration and change—of people and people’s cultural practices—were central to this work. Something that characterises my curatorial approach is the belief that historical objects are frequently palimpsests: objects continually shaped and redefined by the different conditions and contexts in which they circulate. Migration, of course, leaves material traces, particularly on what we wear. The effects of displacement, of conflict, of change, are not only recorded in statistics, or documented through oral history, but also written in intimate ways upon our clothing, our homes, and our bodies. Looking at these intimate, personal, emotional traces of migration and its experience, can be a powerful complement to macro-level perspectives and approaches to history. I’d like to illustrate this by talking about three dresses from the exhibition. 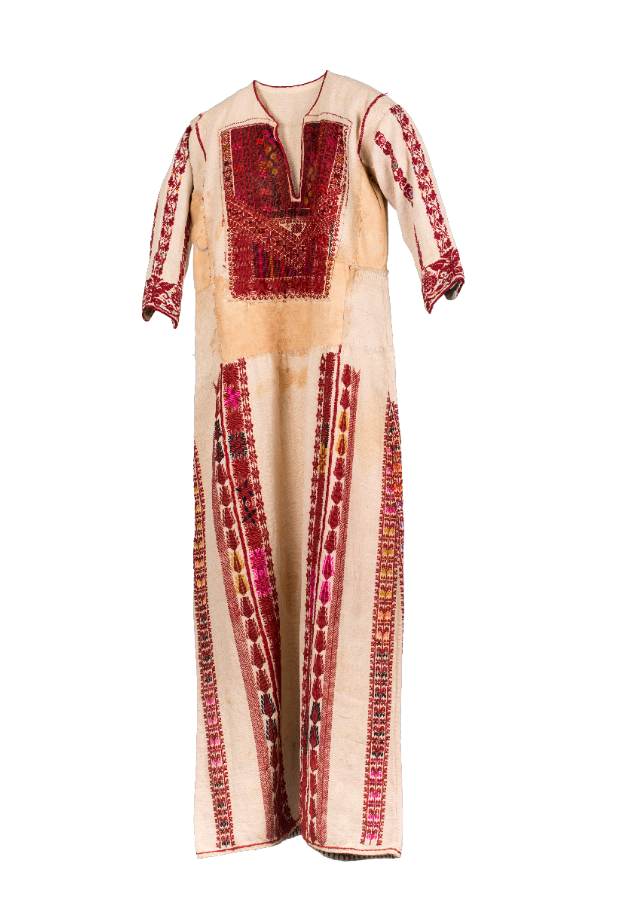 Dress from Ramallah, 1920s/1930s, from the collection of Maha Abu Shosheh, image by Kayane Antreassian, courtesy of the Palestinian Museum.

This dress was originally made by a woman from the villages of Ramallah. You can tell by the pattern, the colour and the motifs that this is a typical Ramallah-style historical thobe, probably from the 1920s or 1930s. However, we know that the woman who made this dress ended up giving it away, to a woman who had been displaced by the Nakba of 1948, a woman who left her home carrying perhaps little more than the clothes on her back. On arriving in the West Bank, the Ramallah women donated her this dress, but you can see that the person who inherited it must have been bigger and taller than she who originally stitched it. The dress has been enlarged around the waist and sides using unusual material: the fine hessian canvas that holds tahini flour, from sacks issued to refugees by UNRWA, the UN Refugee Works Agency. You can still see the nuun (the letter n) of the word tahin (flour) printed in UN-blue on the side of the garment.

The dress thus speaks to the realities of 1948, and to the material urgencies of the Nakba. At the same time, it beautifully reflects the generosity of one woman to another at what must have been the most difficult time of their lives. This garment is a testament to the multiple women who have worn it, and witness to their experiences. It defies the notion that museum objects always have fixed origins and singular makers; it is, instead, a palimpsest. For me it offers a poetic and practical opening to conversations around the intimate realities of displacement. 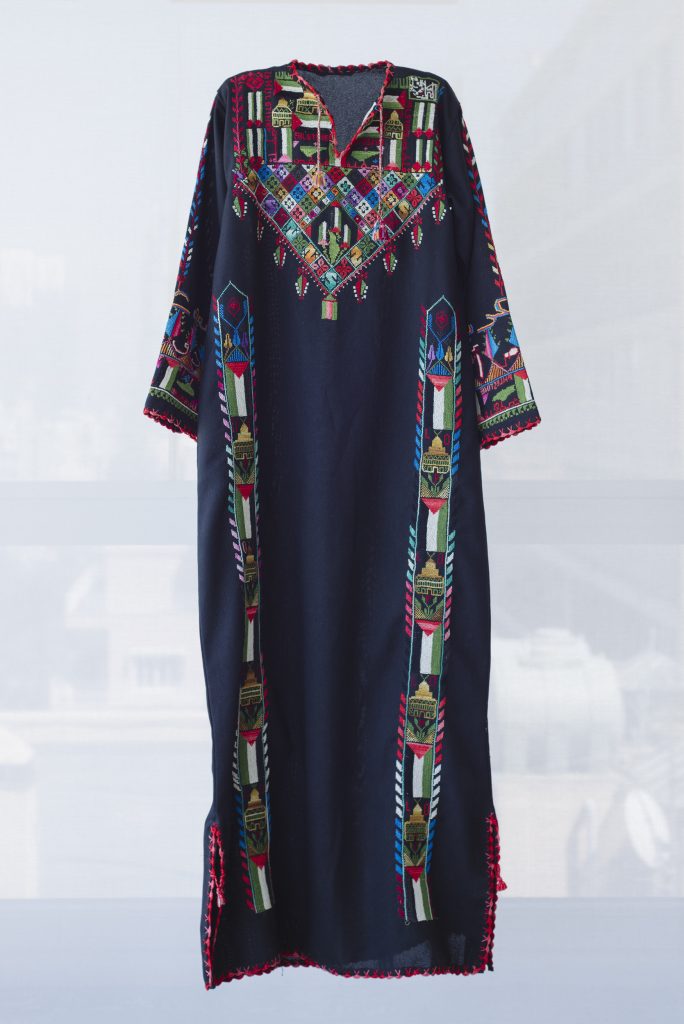 Intifada dress, 1987-1993, from the collection of Tiraz: Widad Kawar Home for Arab Dress, image by Tanya Traboulsi, courtesy of the Palestinian Museum.

This dress dates from the First Intifada in the late 1980s, when embroidery took on fresh power as a tool of Palestinian resistance to Israeli occupation. Alongside violence, curfew and house demolition, the Israeli authorities confiscated Palestinian flags at protests, and banned the display of Palestinian colours in public. In this charged context, ‘Intifada dresses’ were made by the women of the West Bank, who embroidered motifs of Palestinian nationalism onto thobes of gunmetal greys, blues and blacks. Spectacular dresses swap conventional floral, vegetal or geometric motifs for doves taking flight across chest panels, rifles held between their claws, ships of return sailing among the Dome of the Rock, the letters P-L-O, and maps of Palestine stitched in national colours.

These dresses rendered women’s bodies sites of active political resistance. As things worn against the skin, they could not be confiscated from the body, and embodied both agency and intimacy. Embroidery, however, is an unlikely tool of protest. The typical visual materials of resistance—street graffiti, painted banners, scrawled signs—are characterised by speed and spontaneity. The hand-stitched is the antithesis of this. By its nature laboured, private and slow, the embroidery of the Intifada dresses would have required months, if not years of work, under dangerous and difficult conditions. Stitched by candlelight, at night, in secret, these dresses reflect the weighty temporality of all embroidery, and the extended, resilient nature of Palestinian resistance. 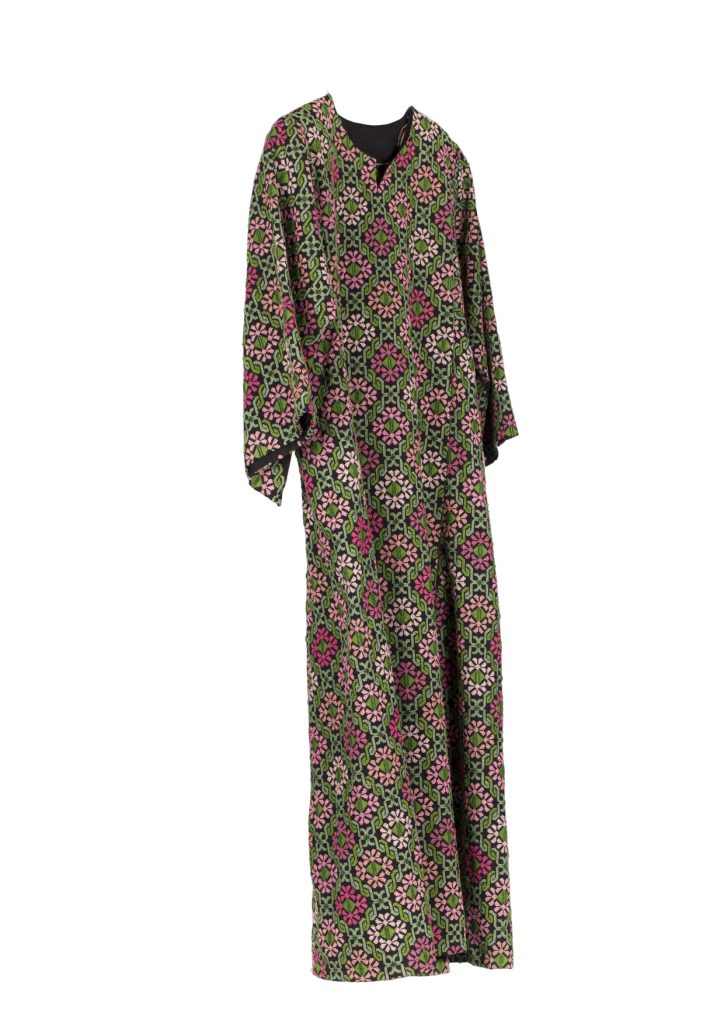 Embroidered dress by Raja el-Zeer, 2014, from the collection of Raja el-Zeer, image by Kayane Antreassian, courtesy of the Palestinian Museum.

Leaping forward in time once more, this is a dress that also departs from Palestinian embroidered traditions. It was made by Raja el-Zeer, from Selfit, who is one of many women that I had the privilege of meeting in refugee camps and urban contexts across Jordan, Lebanon and Palestine during my fieldwork. Interviewing and filming the women and men who continue to embroider today was fundamental to my research, in that it allowed me to embed embroiderers’ voices throughout the exhibition, to let them speak to their experience. As visitors looked at something historical, they were connected, through these testimonials, to the contemporary lives of Palestinian embroiderers, and reminded of the human hand behind the existence of such garments.

Raja embroidered the dress to wear at her son’s wedding in 2014. For an embroidery purist, little about this thobe would be considered ‘traditionally’ Palestinian. Although the conventional cross-stitch remains unchanged, the dress’s silhouette is reflective of more homogenised cuts adopted since the 1980s, and the colours are not those that would have been used historically. Its motifs are not traditional (Raja showed me how she and her friends would share inspiration gleaned from Pinterest and Facebook), nor is the all-over nature of its patterning. And yet, by virtue of being made by Raja, and worn by her, this remains just as much a Palestinian embroidered dress as its hundred-year-old sisters. Raja’s work is a reminder that embroidery in the twenty-first century remains an active, living craft. Just as nineteenth century women sought novelty by looking at their peers, women today draw inspiration from each other, sharing designs on social media. Despite embroidery no longer being worn by women every day, dresses such as Raja’s are evidence that Palestinian embroidery continues to preserve itself, evolving in step with the women who make it.