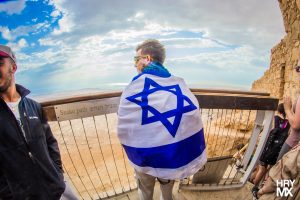 Image credit: “Birthright Israel: Bus 423” by HRYMX is licensed under CC BY 2.0

As a genre of travel, Birthright Israel—a free ten-day trip to Israel for Jewish young adults, funded by the Israeli government, Zionist organizations, and private donors—sits at a strange point of conjuncture. The trip is part-gap year adventure, part-roots tourism, part-religious pilgrimage, and primarily (though implicitly) political propaganda. Its Hebrew name is Taglit, meaning “discovery,” a term that—when combined with the connotations of the word “Birthright”—carries echoes of colonial conquest, Manifest Destiny, and political claim-making of entitlement to the land.

All of these associations can be detected in the imagery and discourse of the official website, BirthrightIsrael.com. The homepage features a backdrop photo of three young people sitting atop what looks like Masada, gazing out across a panoramic sunrise. Scrolling down, more vista photos appear, often photographed from behind and showing the backs of travellers’ heads as they take in a spectacular view. This kind of imagery is of course a staple of tourist photography more generally, but delving deeper into the website reveals a particular fixation even by this standard. The sample itinerary page details eight hiking and view-finding opportunities within the ten-day trip, accompanied by phrases such as: “Jerusalem is calling: Hold on to your escaping breath as you take in an unrivalled panoramic view of Jerusalem”; and, “Climb the Roman Ramp to the top of Masada to catch a sunrise that will stay with you for the rest of your life. Tour the mountaintop fortress that became synonymous with Jewish audacity and bravery.”

As these descriptions indicate, the iconography of the climb and its reward—the perusal of an expansive landscape coded as inherently Jewish and Israeli—represents the ideological core of the Birthright trip. The website’s main promise is that the trip will bring an intensely personal and physical experience of the region’s topography, allowing participants to “go beyond the tourist sites and connect to the landscapes,” “awaken[ing] your soul with breathtaking views.” In this imagery, I argue, the tourist gaze merges with the settler-colonial gaze to produce a distilled emblem of embodied knowledge and ownership of the land—an iconography situated within the Zionist tradition of ritualistic hiking, tiyul. 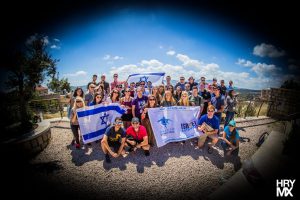 Image credit: “Birthright Israel: Bus 423” by HRYMX is licensed under CC BY 2.0

This version of Jewish identity clearly appeals to the “model Diaspora” stance, according to which diasporas are premised upon the ideal of return to one true homeland. Birthright participants from all across the world are encouraged to discover that Israel is where they really belong, and indeed, surveys show that the trip significantly increases the likelihood of North American participants feeling “very much” connected to Israel (an increase of around 40%) with around 5% choosing to permanently immigrate.

Yet not all participants are so convinced by the tiyul narrative, and in recent years there has been a rise in dissent by trip participants, both during and after their visits. Some activist groups have created alternative trips to the region that seek to represent Palestinian viewpoints, such as Birthright Unplugged, while others eschew visiting Israel/Palestine altogether, preferring to boycott the trip and construct a Jewish sense of self defined not by the nation of Israel, but by diasporist belonging.

One such group is the radical leftist and anti-Zionist culture-jamming group Jewdas, which, according to its blog, expounds a vision of “a diaspora with no centre, a diaspora with no homeland.” Within this deterritorialized diasporism, belonging is found in non-belonging: in the rejection of ethnic tribalism, in the embrace of pluralism, and in practices of critical thinking and tikkun olam (the Jewish concept of social justice).

Putting this philosophy into action, in 2015 Jewdas launched its first parodically-titled Birthwrong trip. Open to anyone—“all levels of Jews and goyim” alike, although presumably self-selecting along political lines—the trips go not to Israel/Palestine but to cities with less-celebrated and -canonized Jewish diasporic histories, such as Andalusia and Marseille. By shifting the destination each year to these lesser-known locations, Birthwrong attempts to embody the notion of “a diaspora with no centre.”

The trip’s website makes clear this challenge to the hegemony of Zionist “homeland” ideology, subverting Birthright in a number of aesthetic ways. In contrast to Birthright’s slick and professional website, earnest promise of self-discovery, and romantic natural imagery, Birthwrong’s online content is minimal, satirical, and features communist and diasporist iconography. In what seems to be a direct parody of the practice of tiyul, the list of trip activities includes “Hiking in the hills, Wine in the hills, […] Really just so much wine.” A mock quotation at the top of the homepage (“Birthwrong is probably the pinnacle of all human achievement. Everyone who’s anyone will be there”) is attributed to the Babylonian Talmud, a reference to the thousand-year period in which Jewish cultural output thrived in the Babylonian diaspora. Thus, Birthwrong situates itself as simultaneously steeped in Jewish transnational history and identity, while also ideologically opposed to the Zionist vision of Jewishness promoted by Birthright Israel.

These websites—Birthright and Birthwrong—represent two competing visions of what “diaspora” might mean for young Jews around the world. As this brief case study has shown, looking at them side by side helps us to unpack the traditional view of the “model Diaspora” and to complicate discourses of home and identity in contemporary Jewish media.