The Righteous and Harmonious Fists

The Righteous and Harmonious Fists

Taking place in the wake of serious drought, floods and hunger, The Boxer Rebellion, Yihetuan or most poetically, The Righteous and Harmonious Fists Movement, was an uprising in China that took place between 1899 and 1900. Tensions rose quickly, culminating with serious anti-foreigner violence in Peking (Beijing) and the city being taken under siege by ‘the Boxers’. Eight international forces eventually forcibly subdued the rebels and the following September the Peking Protocol was signed, formally ending the Boxer Rebellion.

With that great benefit of hindsight, the rebellion was perhaps inevitable. In the late 19th century, the Opium Wars and the Sino-Japanese War had led to millions of Chinese casualties; Japan and the West had forced the ruling Qing dynasty to accept humiliating foreign control over the country’s economic affairs; and Western missionaries were converting thousands to a foreign religion-Christianity. Whilst labouring Chinese were getting poorer and hungrier, foreigners could be seen living in comparative luxury, and so the conditions were set. The Boxers united around shared proto-nationalist sentiments and an opposition to Western imposters.

‘Boxers’ earned their name from their fervent practise of martial arts which they believed gave magical immunity to Western weapons, even to bullets. It must have seemed a most bizarre and intimidating practice to the onlooking ‘wai guo ren’, but being somewhat reminiscent of shadow boxing, the nickname was born. 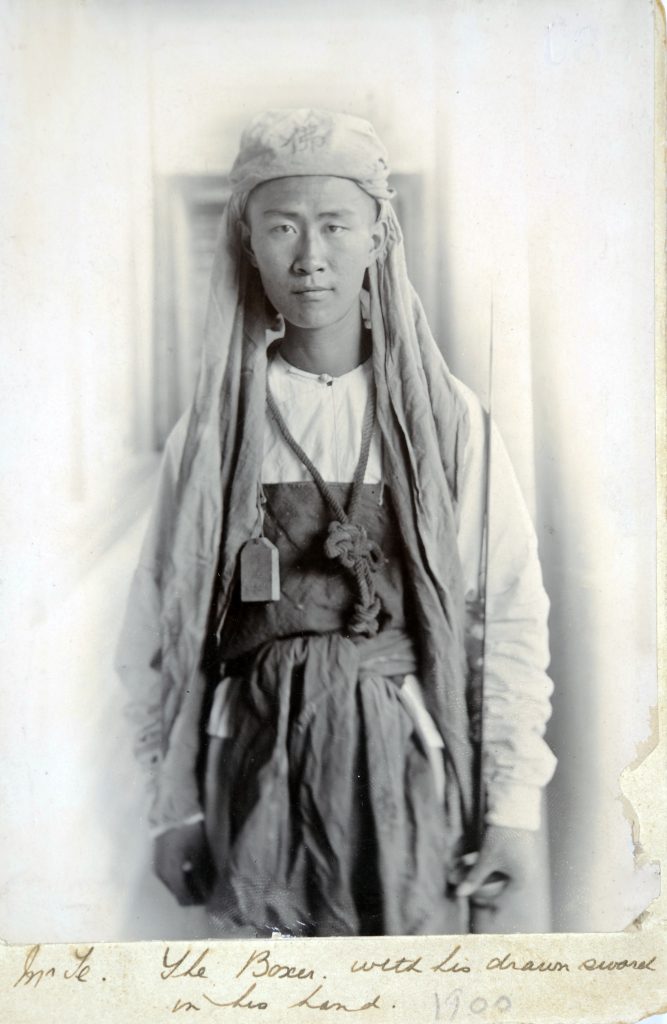 The SOAS archive is rich in collections which document or refer to the Boxer Rebellion’s impact upon those living and/or working in China, from missionaries to businessmen, and the archive of John Swire & Sons (collection reference JSS) is no exception.

Today Swire is a highly diversified business group, best known for its air-carrier Cathay Pacific, but it was founded in 1816 by John Swire, a Liverpool merchant. The archives, available for research at SOAS Archives and Special Collections, document the company’s expansion into Asia as the partnership Butterfield and Swire (B&S). From China, B&S swapped the textile trade for shipping, founded the China Navigation Company, began navigating the Yangtze River and established the Taikoo Sugar Refinery. They were in exactly the wrong place at the wrong time to witness the approaching Boxers.

As Swire’s archivist, it’s fascinating to see the rebellion unfold through the collection’s expansive correspondence. These letters send regular updates to London, covering everything from business accounts to local weather; staffing issues to the price of a box of cigarettes in Shanghai. In the summer of 1900 they send first news of ‘the Boxer troubles’.

At first it’s just a naively unconcerned remark, but after news of the Boxers siege of Peking, there is growing anxiety, if only at first for the perceived impact upon profits: an ‘ill timed [sic] and uncalled for invasion [by the Japanese] has had a disastrous affect [sic] on trade’ the imposing appearance of ‘an armed Jap [sic] on every street corner’, had cleared ‘40,000 Chinese…from our port’ of Amoy (Xiamen). One letter states an estimated loss of a not insubstantial $1,000,000 to the port. Another speaks of the ‘grave fears’ held for ministers and foreigners caught up in the siege. 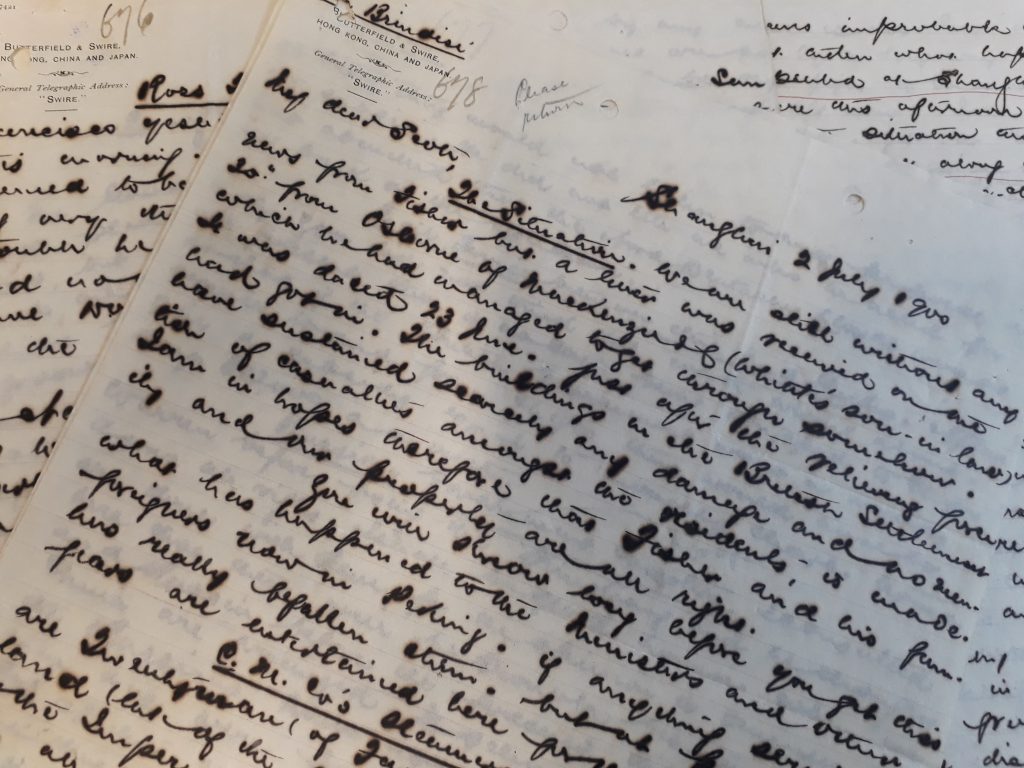 ‘You will know long before you get this what has happened to the Ministers and other foreigners now in Peking. if anything serious has really befallen them. but at present grave fears are entertained here for their safety.’ ©John Swire & Sons Ltd

As the severity of the rebellion was recognised internationally, the Japanese were joined by Russian, British, French, German, Italian, Austro-Hungarian and American forces. In the same town, one of Butterfield and Swire’s godowns, or warehouses, was being used as temporary barracks, quartering the British forces arriving to subdue the Boxers and suppress ‘the raids of armed robbers.’ This afforded some reassurance of protection for B&S employees, but the writer also speaks of his anxiety around fire damage, stating that he has asked soldiers, no doubt hopelessly, not to smoke. Incredibly, with the violence and death toll rising, the writer’s concerns still appear to be business-based! Even as his life is increasingly in danger. 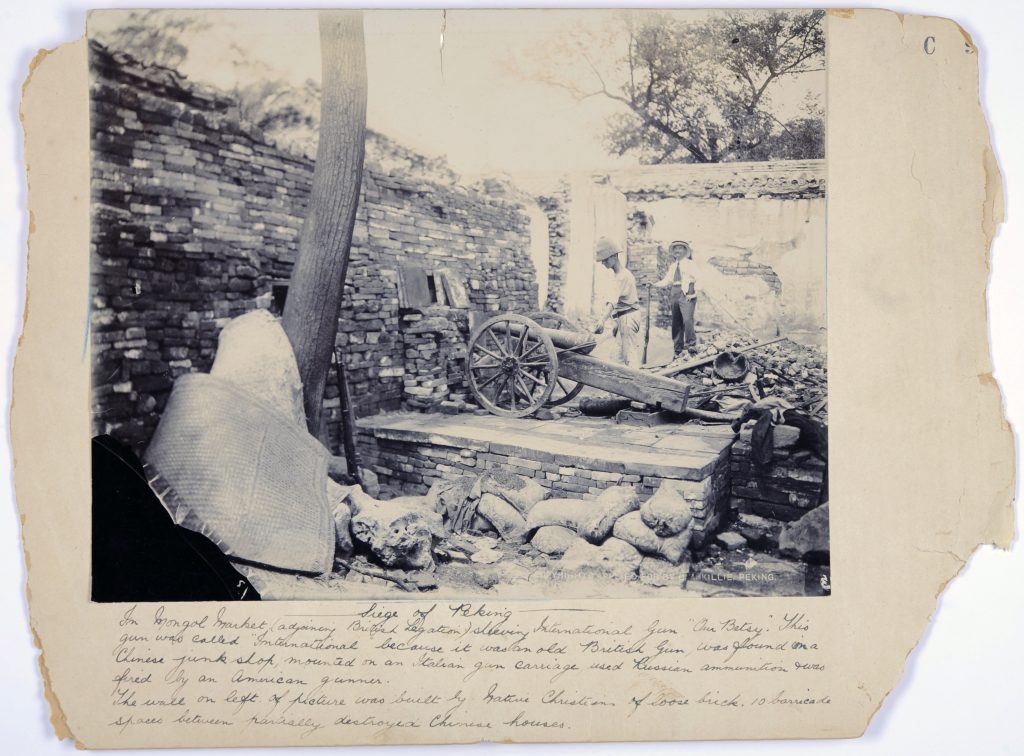 ‘In Mongol Market (adjoining British Legation) showing International Gun “Our Betsy”. Gun called “International” because it was an old British Gun, was found in a Chinese junk shop, mounted on Italian gun carriage, used Russian ammunition & was fired by an American gunner.
The wall on left of picture was built by Native Christians of loose brick, 10 barricade space between partially destroyed Chinese houses. © SOAS Library

It is with tangible relief that a brief letter dated 7 September 1900 sends news that the Japanese and British had finallly withdrawn their men from Amoy. ‘The Chinese are very jubilant…but it will be a fortnight before much in the way of business in done.’ One imagines that this relief extends to the safety of his colleagues and family too.

Together with the expected business element, letters in the Swire Archive provide a snapshot of the human experience of Western business in Asia. Messages sent to the London head office share experiences of employees living and working, with their families, in a culture, climate and continent very different to that which they had come from. Letters from another Butterfield and Swire agent capture the anxiety felt for colleagues and families caught up in the rebellion, some of whom had escaped by steamer ‘very much shaken and unnerved [by] a terrible time…. astonished’ that there were not more casualties and ‘none very serious’. Another letter written on the 21st of July 1900, is from an agent trying to track the whereabouts of his colleague’s wife. Due to return to China from Brisbane she may, or may not, have received advice to head directly to England. With passage between Australia and Britain taking up to 40 days at the time, he must have had an anxious wait ahead of him. 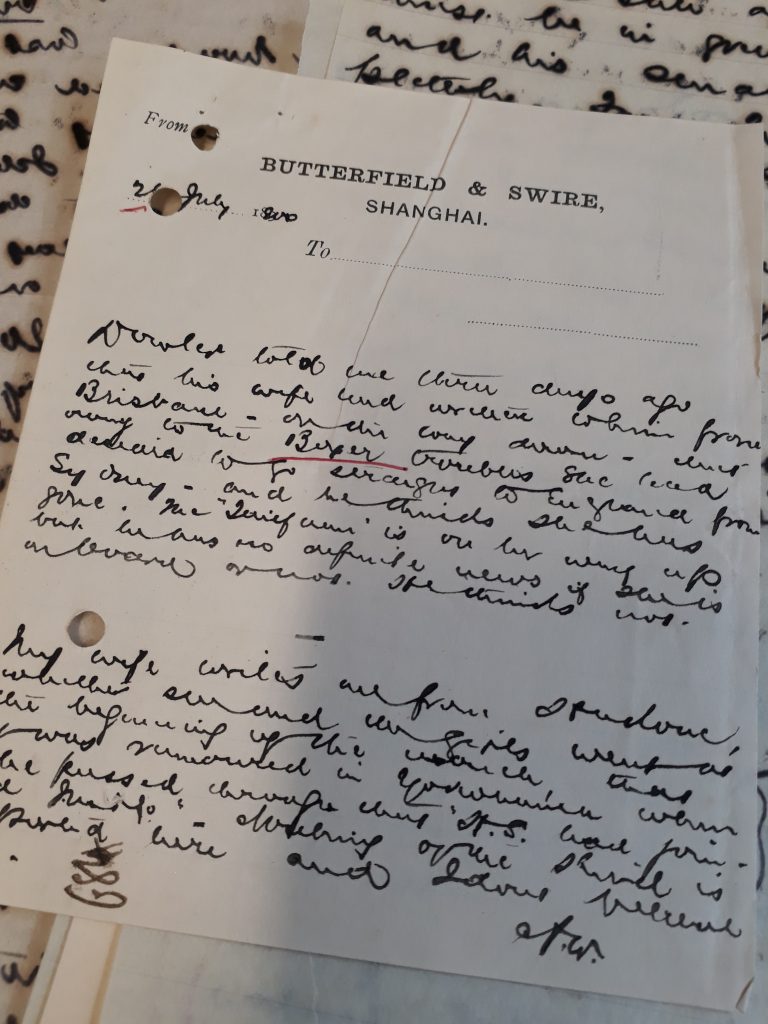 In September 1901, overcome by Europe, Russia and Japan, the Chinese Qing government were compelled to sign the Protocol of 1901, which saw the formal end of the uprising, which had cost an estimated 40,000 lives. In this, the Qing government agreed to pay 980 million taels over a 39 year period. A crippling debt, that saw the Qing government humiliated and terminally weakened, in its defence and its dynasty. 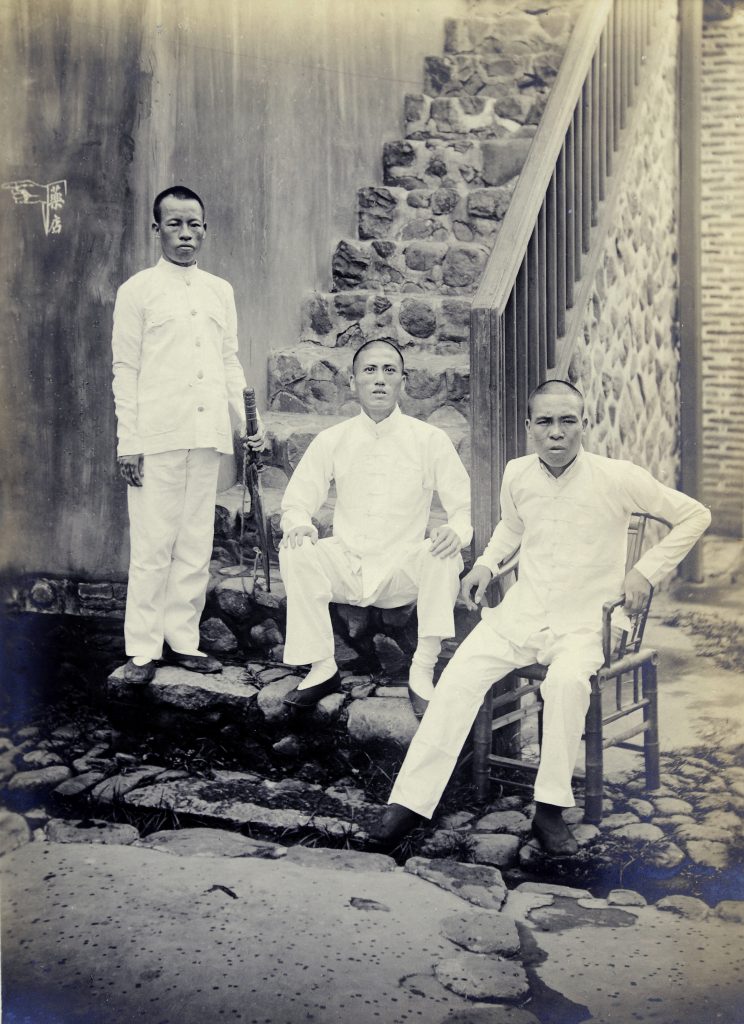 Injured Chinese soldiers photographed here next to a deaf-mute public executioner, himself carrying a knife on the left and suffering burns from lighting gunpowder, believing it to be opium. The pointing hand on the wall has written on its sleeve the Chinese characters for Drug Store. ©SOAS Library

If you would like to explore the Archives held at SOAS, please visit our website’s online catalogue available here, send us an email, or make a trip to SOAS Archives and Special Collections in the basement of SOAS library. You could also join us at our Open Day event on Wednesday 15th November, between 11am and 4pm. We look forward to seeing you!