Today we continue our celebration of Black History Month 2014 by taking a closer look at some of the manuscripts by the leading Kenyan author Ngũgĩ wa Thiong’o, which are available at SOAS Archives as part of the Heinemann Educational Books Ltd collection. These include prepublication annotated typescripts of Ngũgĩ wa Thiong’o’s famous novels ‘Weep Not, Child’, ‘A Grain of Wheat’, ‘Devil on the Cross’ [translated version of Caitaani mũtharaba-Inĩ], and his autobiographical work ‘Detained: A Writer’s Prison Diary’. 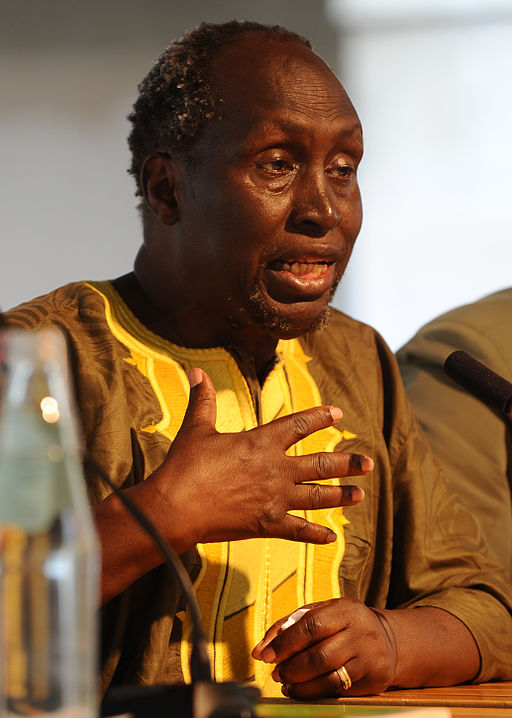 Ngũgĩ wa Thiong’o is a prominent Agĩkũyũ-Kenyan novelist, playwright and cultural theorist. Born in 1938 in Kiambu district in British-controlled Kenya, he was baptised as ‘James Thiong’o Ngugi’ and raised in an Agĩkũyũ family of tenant-farmers to the north of the city of Nairobi. He was educated at the European mission-school at Kamaandura in Limuru; an Agĩkũyũ-run Karinga Movement school in Maanguu; and Alliance High School in Kikuyu. Ngũgĩ wa Thiong’o was an adolescent during the 1950s rebellion against British colonial-rule by the Kenya Land and Freedom Army (KLFA), which became known as the ‘Mau Mau Uprising’. His elder-brother was a KLFA member, his step-brother was killed, while his mother was tortured by colonial Government forces during the revolt.

Following the completion of a secondary education, Ngũgĩ wa Thiong’o enrolled to read Economics at Makerere University College in Kampala [Makerere University Kampala, Uganda] but subsequently transferred to study English Literature, graduating in 1963. As a student at Makerere, living in Northcote Hall [now Nsibirwa Hall], he wrote his first published novel, Weep Not, Child, which was distributed in 1964 by the British-based publisher Heinemann Educational Books Ltd, as part of its highly influential Heinemann African Writers Series (HAWS, no. 7). The first Heinemann edition of the book was issued under the author’s baptismal name ‘James Ngugi’. 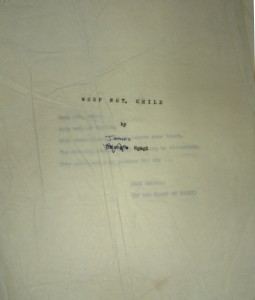 Weep Not, Child is widely acknowledged as the first published English-language novel to be written by a black author from East Africa. A prepublication typescript of the novel, with handwritten corrections by Ngũgĩ wa Thiong’o, is available to the public at SOAS Archives [ref. MS 337273 Heinemann Educational Books Ltd collection]. Intriguingly, the name originally on the typescript, ‘Thiong’o Ngugi’, has been amended by a later hand to read ‘James Ngugi’. It is not clear if this is amendment is by the author himself or by Heinemann editorial staff. The novel itself follows the story of Njoroge, a young Kenyan Agĩkũyũ boy who attempts to pursue an education during the KLFA uprising against British colonial rule in Kenya during the 1950s. The novel deals with the lived experience of settler colonialism and resistance amongst the Agĩkũyũ community during the 1950s.

Following graduation from Makerere, Ngũgĩ wa Thiong’o won a scholarship to undertake a Masters on Caribbean Literature at the University of Leeds in the United Kingdom. Leeds was during the 1960s an emerging centre for the study of what was then known as ‘Commonwealth literature’, English-language literature written by authors from Commonwealth Anglophone countries in Africa, Asia and the Caribbean. Ngũgĩ wa Thiong’o’s postgraduate studies focused on the work of Barbadian novelist George Lamming, author of In the Castle of My Skin. Ngũgĩ wa Thiong’o would later publish some of the ideas developed during his studies as Homecoming: Essays on African and Caribbean Literature, Culture and Politics (Heinemann, 1972). SOAS Archives makes available a typescript and photocopy of Homecoming, with author’s corrections [ref. MS 337274, Heinemann Educational Books Ltd collection]. 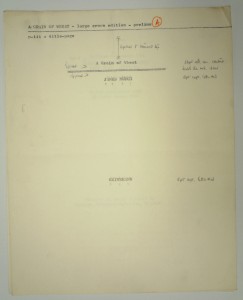 During his time in Britain as a student at Leeds; Ngũgĩ wa Thiong’o would write his third and perhaps most famous novel, A Grain of Wheat. The novel was published in 1967 as part of the Heinemann African Writers Series (HAWS no. 36). Typescript and corrected copies of A Grain of Wheat are available at SOAS Archives [ref. MS 337272, Heinemann Educational Books Ltd collection]. The novel tells the interrelated stories of the inhabitants of a fictional Agĩkũyũ-Kenyan village set during the KLFA rebellion and in the run up to Kenyan Uhuru or Independence Day celebrations. The plot revolves around revelations concerning the historic betrayal of a KLFA resistance fighter to the British at the height of the uprising. The work examines the political, social, and psychological meaning of Uhuru [‘freedom’ in Swahili] in post-Independence Kenya, and the frustration and disillusionment felt by some in the realities of the continuing inequalities after decolonisation. The novel reflects an increasingly radical social critique in Ngũgĩ wa Thiong’o’s work, which is widely attributed to his engagement whilst at Leeds with the works of Martinique-born psychiatrist and anticolonialist philosopher Frantz Fanon and theories of Marxist literary criticism.

On returning to Kenya, Ngũgĩ wa Thiong’o obtained work as a lecturer in English Literature at the University of Nairobi. Following his appointment, he was successful in leading a campaign to rename the Department of English Literature as the Department of African Languages and Literature, in an effort to place African oral and written literature traditions at the centre of the institution’s teaching and research programme.

In 1968, the author disowned his Christian baptismal name, ‘James Ngugi’, and changed his name back to the Agĩkũyũ name, Ngũgĩ wa Thiong’o. He would also renounce writing future works in English, viewing the language as a problematic cultural legacy of colonialism. His later novels, plays and essays have been written in the Gĩkũyũ language of the Agĩkũyũ or Kiswahili. 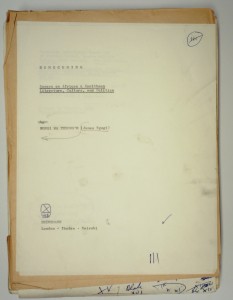 During the mid-1970s, Ngũgĩ wa Thiong’o was a co-founder and chair of the cultural committee of the Kamiriithu Community Education and Cultural Centre, which was responsible for a programme of radical African language theatre and performance celebrating participatory forms inspired by the indigenous Kenyan oral literature tradition. The performance of the play Ngaahika Ndeenda [I Will Marry When I Want], co-written by Ngũgĩ wa Thiong’o, a work which fiercely criticised the hypocrisy and corruption of the new economic elite in post-Independence Kenya, led the arrest and imprisonment without trail of Ngũgĩ wa Thiong’o on the orders of the Kenyan Vice-President Daniel arap Moi.

Detained in the Kamiti Maximum Security Prison, Ngũgĩ wa Thiong’o wrote the first modern written novel in the Gĩkũyũ language, Caitaani mũtharaba-Inĩ, written in secret on prison toilet paper. SOAS Archives holds the original typescript copy of the Ngũgĩ wa Thiong’o’s English language translation of the novel, which was later published in 1983 as part of the Heinemann African Writers Series under the name Devil on the Cross (HAWS no. 200), along with the publisher’s copy of the translation with handwritten corrections by the author [ref. MS 380341, Heinemann Educational Books Ltd collection]. Caitaani mũtharaba-Inĩ [Devil on the Cross] tells the story of protagonist Wariinga as she travels from urban Nairobi to her ancestral town in search of a better life, and her discovery of a feast of thieves organised by the Devil. The encounter used as an allegorical form to address the neocolonialism and exploitation experienced by the poor in post-Independence Kenya.

Released from prison after a year following an international campaign, Ngũgĩ wa Thiong’o was stopped from resuming his work at University of Nairobi and suffered harassment by the authorities. In 1982, the Kamiriithu Community Education and Cultural Centre was finally banned by the government and the buildings burnt to the ground. Soon after this event, Ngũgĩ wa Thiong’o was forced into exile. Firstly, spending time living and writing in London, where he published the autobiographical Detained: A Writer’s Prison Diary, which recounts his incarceration and reflects on the political aims of the Kamiriithu Centre project (HAWS, no. 240). SOAS Archives holds the author’s original typescript of the English-language version of the work and two copies of publisher’s typeset with Ngũgĩ wa Thiong’o’s corrections [ref. MS 380340, Heinemann Educational Books Ltd collection]. During this time, Ngũgĩ wa Thiong’o would also publish his influential theoretical work on the postcolonial position of language, Decolonising the Mind: The Politics of Language in African Literature (1986).

Ngũgĩ wa Thiong’o left London to take a professorial position at New York University in 1992 and has continued to write both fiction and non-fiction in Gĩkũyũ. Ngũgĩ wa Thiong’o finally returned to visit Kenya in 2004 following the end of the government of President Daniel arap Moi, although the author and his wife, Njeeri, were subject to what is thought to have been a politically motived violent attack during their visit.

Ngũgĩ wa Thiong’o is currently Distinguished Professor of Comparative Literature and Performance Studies at the University of California, Irvine. He was nominated this year for the Nobel Prize for Literature. 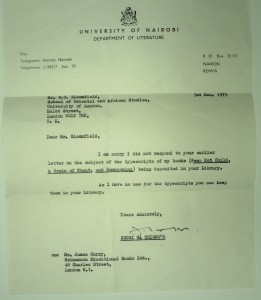 Letter from Ngũgĩ wa Thiong'o (University of Nairobi) to B.C. Bloomfield (Librarian, SOAS), December 1975, regarding the placement of his typescripts at SOAS Library

This collection includes manuscript and proof copies of works from the influential Heinemann African Writers Series (1962-2003), which has published some of the key texts of modern African written literature. Publications included original English-language prose-fiction and poetry from new novelists, playwrights and poets across diverse national written literatures of Africa; translations of Francophone, Lusophone, and later Afrophone literatures; as well as political memoirs and tracts from leading African national liberation figures and politicians. The books in the series were designed by the publisher for classroom use in Africa and printed in low-cost paperback editions to make them affordable for African institutions and students. It met a growing demand in Africa for a specifically African written literature which would move beyond the Eurocentric biases in the teaching of Literature in the post-Independence period. The success of the Heinemann African Writers Series outside of Africa also provided a world-wide Anglophone audience for the African written literary tradition. The series provided an early international voice to leading African writers, including Chinua Achebe (also the series’ first editor), Ngũgĩ wa Thiong’o, and Nadine Gordimer.

The collection includes works of poetry, drama, and non-fiction by over 60 authors, including Chinua Achebe (Beware Soul Brother); Elechi Amadi (The Concubine; Sunset in Biafra; Estrangement);  Syl Cheyney-Coker (The Graveyard Also Has Teeth); Thomas Obinkaram Echewa (The Crippled Dancer; The Land’s Lord); Nadine Gordimer (Some Monday for Sure); Nelson Mandela (No Easy Walk to Freedom), Ngũgĩ wa Thiong’o (Weep Not, Child; A Grain of Wheat; Secret Lives; Petals of Blood; The Trial of Dedan Kimath; Devil on the Cross; and Detained: A Writer’s Prison Diary); Martin Owusu (The Sudden Return); Mwangi Ruheni (The Future Leaders; The Minister’s Daughter); and Stanlake Samkange (The Mourned One).

The largest part of the Heinemann Educational Books Ltd collection was presented to SOAS Library by the publisher in the 1970s and 1980s, after which the Library sought approval from authors for their manuscripts to be made available to the public; some works were donated or deposited directly by the authors themselves, and a small number of works were purchased. The institutional company records of Heinemann Educational Books Ltd, 1946-80, including correspondence between the publisher and the writers and reports by manuscript reviewers are held separately at The Archive of British Publishing and Printing, Special Collections, University of Reading.

The manuscripts in the Heinemann Educational Books Ltd collection will likely be of interest to students and researchers across the world in a broad range of subjects, including African literature, postcolonial studies, and translation studies. SOAS Library is the UK’s National Research Library for Asia, Africa and the Middle East and we very much welcome visits from all academic researchers, students, and individual researchers who wish to consult the Heinemann African Writers Series manuscripts at SOAS Archives.

We would also welcome expressions of interest from academic staff who wish to employ these primary sources in their teaching to enrich and enhance the learning experience of their students.