As SOAS marks Black History Month we continue to hi-light historical collections held by SOAS Archives, which reveal the long-standing Black presence in the UK, as well as the contributions and achievements of Black peoples in local, national and international arenas. This week we look at the papers of Sol Plaatje, South African writer, linguist, politician and activist . 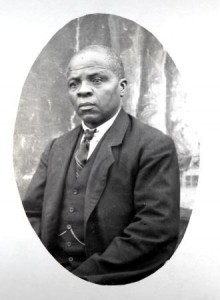 Born on 9 October 1876, Solomon Tshekisho Plaatje was a descendant of the Barolong royal house. His parents were committed Lutheran Christians, moving the family to Pniel in the Orange Free State, now Free State Province of South Africa, where they worked for the local Lutheran mission station (Berlin Missionary Society). Plaatje received his formal education from the mission school and in February 1892, became a student teacher. In March 1894 he moved to Kimberley, becoming a telegraph messenger for the Post Office. Plaatje continued his education privately and passed the Cape Civil Service examinations.

Plaatje was a skilled linguist, fluent in English, Dutch, Sesotho, Setswana, isiXhosa and German. By 1898 he was working as the official interpreter at the Kimberley Magistrate’s Court and later transferred to the Mafeking Magistrate Court. On the eve of the Boer War, he was sent to Mafeking as an interpreter.  During the siege of Mafeking, 1899-1900, he acted as both court interpreter and clerk to the Civil Commissioner and Magistrate of Mafeking, Charles Bell.  Plaatje went on to record his own Boer War diary which was later published as Mafeking Diary: A Black Man’s View of a White Man’s War (1989). 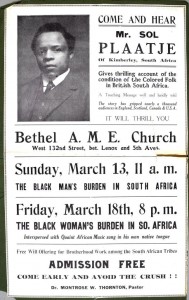 At the end of the war, Plaatje worked as a journalist.  With financial backing from Silas Molema, he established the first Setswana-English weekly paper, Koranta ea Becoana (The Bechuana Gazette), editing the paper between 1902 and 1905. He was chosen as the first Secretary-General of the South African Native National Congress (forerunner of the African National Congress), which was formed in 1912. In 1914 and 1919 he was a member of the Congress delegation to London to protest against the Natives’ Land Act of 1913.  Plaatje remained in London 1914-1917, and returned 1919-20 and 1922-23, addressing public meetings and working as a language assistant at London University. He also travelled throughout Europe, Canada and the United States, using public platforms to draw attention to the plight of Black South Africans.

Plaatje wrote a number of books, including Native Life in South Africa (1915) and Sechuana Proverbs (1916).  In 1919 he wrote Mhudi (published in 1930), which was the first published novel written in English by a Black South African. He also translated Shakespeare’s Merchant of Venice, Comedy of Errors and Othello into Setswana. He returned to South Africa in October 1932. He died on 19 June 1932 in Johannesburg and was buried at West End Cemetery in Kimberley.

The papers of Solomon Plaatje (Ref. MS 375495), deposited at SOAS Library in 1978, include biographical material, notes, correspondence, source material for his publications, press cuttings and photographs, and give an insight into his life and work.  Related manuscript copies of two of his notebooks, ‘The Essential Interpreter’ and ‘Sekgoma’ (Ref. MS 380192), are also available and can be consulted in the Special Collections Reading Room. Please email docenquiry@soas.ac.uk to arrange access. 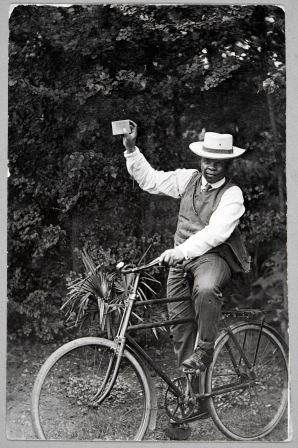 Plaatje’s Boer War Diary is now available in the Digital Archive at the University of Witwatersrand, Johannesburg.

Sound recordings of Plaatje have been rediscovered at the British Library.