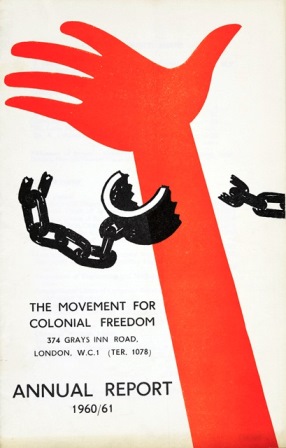 In celebration of May Day or International Workers’ Day we are today highlighting the archive of the Movement for Colonial Freedom and its successor Liberation available to researchers at Archives & Special Collections, SOAS Library.

A brief history of the Movement for Colonial Freedom & Liberation

The Movement for Colonial Freedom (MCF) was a leading anticolonialist campaign group and civil rights advocacy organisation. Founded in 1954, as an amalgamation of a number of smaller campaign and lobby groups, including the British branch of the Congress of Peoples’ against Imperialism, the MCF had a strong association with the British labour movement. Organisations affiliated to the group at its foundation included a number of national trade unions, trade councils, constituency Labour parties, local co-operative societies, trade union branches, as well as student groups and British-based organisations representing various colonial diasporas.The prominent Labour Party members of parliament Fenner Brockway and Tony Benn were founder members, and the early Chair and Treasurer of the group respectively; while individual Labour, socialist and Communist activists served on its national bodies and area councils across the country. The historian Stephen Howe describes the MCF:

“as the culmination of active opposition to colonialism in Britain – the point at which anticolonial feeling on the British Left found its most unified, coherent and forceful organisational expression and widest base of support. During the first ten years of its existence the MCF was, in terms of range of supporters and contacts and scope of activities, among the most important post-war British political pressure groups” (Howe, 1993: 231) 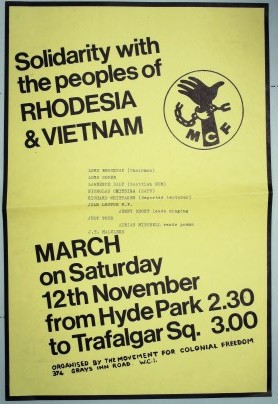 The MCF campaigned energetically for the end British colonial rule in Africa, Asia and the Caribbean and supported and publicised independence and national liberation movements who were organising for political freedoms and national self-government and self-determination in British and other European colonies. In the context of an increasingly repressive European response to independence movements in parts of Africa and Southeast Asia during the 1950s, the MCF challenged pro-Empire views within the labour movement and wider British society and sought to make the moral and political case for international labour solidarity and decolonisation.

The group lobbied the UK government and parliamentarians and tabled hundreds of parliamentary questions (via a group of sponsoring MPs, who included future Labour Prime Minister Harold Wilson and Barbara Castle). The MCF organised mass public events, including campaign meetings and demonstrations; and produced regular publications, including a bi-monthly journal, Colonial Freedom News (later renamed Liberation in 1966). The MCF, through its Trade Union Committee, also sought to intervene in disputes between colonial trade unions and authorities and to assist these labour movements with financial and political support. The group was, moreover, fundamental to the creation of a number of other single-issue campaign groups, including among others the Anti-Apartheid Movement (UK), the Committee for Peace in Nigeria (established during the Nigerian Civil War) and British Council for Peace in Vietnam.

The MCF’s officers, councils and regional committees reflected the increasingly transnational political and personal networks of the 1950s and 1960s which involved British left-wing activists and nationalist, socialist and anticolonialist immigrants and exiles from European colonies present in Britain. Joseph Murumbi, a representative of the Kenyan African union (later a Vice-President in post-independence Kenya) served as an early MCF General Secretary, and notable figures such as George Padmore, Oliver Tambo, Ruth First, and Leon Szur all played roles within the group; while at times the MCF shared its cramped London office with representatives of various independence movements, including the Uganda National Conference, the Zimbabwe African Peoples Union and the Zambian United National Independence Party. 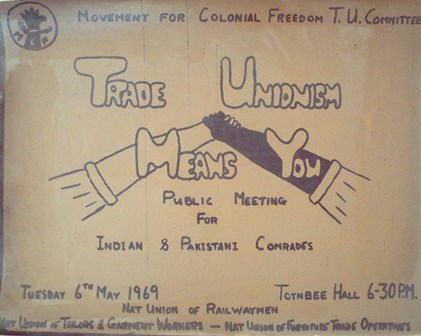 During the 1960s, in response to a rise in anti-immigrant sentiment in British political discourse, the MCF increasingly campaigned domestically against the racism and discrimination faced by minority ethnic groups in Britain. Opposing the restrictions of the 1962 Colour Bar Immigration Bill, the MCF Trade Union Committee distributed over 100,000 leaflets in workplaces challenging the notion that Commonwealth immigration was a threat to jobs, while the group was pivotal in the broad-based campaign against the views expressed in Enoch Powell’s infamous 1968 ‘rivers of blood’ speech. 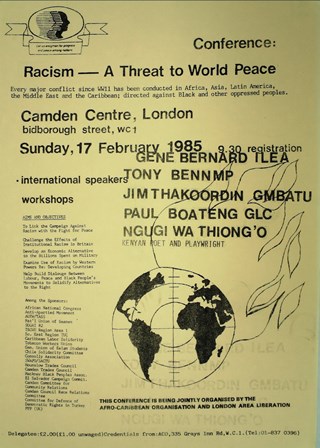 By the late 1960s many former European colonies had gained formal political independence from European states and the MCF turned its attention to what it saw as the growth of ‘neocolonialism’ in the world system, whereby newly decolonised countries continued to experience heavy economic, political and military dependence upon former colonial powers and other more economically developed countries, in particular the United States. In 1970, the MCF was renamed as Liberation to reflect the group’s new priorities around economic and social self-determination in this new global environment. Today, Liberation continues to campaign around both domestic and international issues, opposing  what it sees as the imperialism, neocolonialism and exploitation present in the modern globalised world. Liberation continues to seek to fight for social justice, human rights, peace and disarmament, the abolition of racial discrimination, and to promote economic and political self-determination for the peoples of the Global South.

The MCF & Liberation archive at SOAS 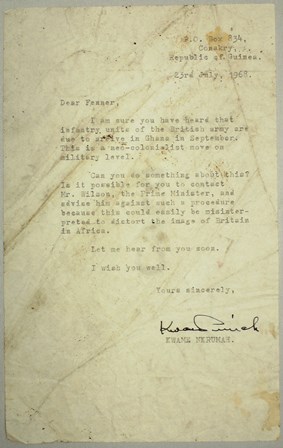 SOAS Library makes available the archive of the MCF and its successor Liberation. The archive collection at SOAS contains a wealth of information on the British Left and its complex historic relationship to issues of Empire and decolonisation. The archive includes MCF’s public and private correspondence with both British governments, nationalist movements and post-independence officials during the rapid changes of decolonisation and provides valuable insights into some of the major international events of the past 60 years, including Suez Crisis, the Kenyan and Malayan Emergencies, the end of white-minority rule in Rhodesia and the growth in opposition to Apartheid in South Africa. The records include policy discussions and minutes reflecting the debates within the Left over colonial and international issues and Labour Party foreign policy set in the context of growing divisions framed by the Cold War. The records are also important documentation of the longstanding role played by activists from African, Asian and Caribbean diasporas in British political life; as well as shedding light on some of the earliest organised campaigns against racism and discrimination in British society.

The archival records of MCF and Liberation include internal Executive Committee minutes and papers; Central Council and AGM papers; various committee papers, including regional (West Africa, Southeast Asia, etc), Trade Union and Racial Discrimination committees; files on the group’s work on individual countries and regions (including correspondence and reports) and files on particular activities by the group (campaigns, events and mobilisations, etc); as well as a run of MCF and Liberation publications.

Archives & Special Collections, SOAS Library welcomes and encourages visits from researchers who wish to consult the important MCF and Liberation collection. Please see our website for further details about how to visit us or email us at special.collections@soas.ac.uk