The Life and Afterlife of David Livingstone: ‘Missionary Travels and Researches’

The Life and Afterlife of David Livingstone: ‘Missionary Travels and Researches’ 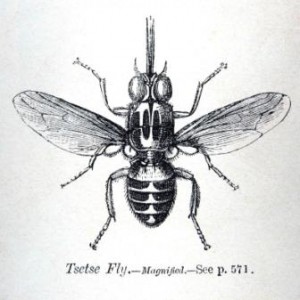 Image of a Tsetse fly from Missionary Travels and Researches, 1857

On his return to Britain at the end of 1856, Livingstone published an account of his cross-continental African travels with a leading publisher of travel literature, John Murray. Missionary Travels and Researches in South Africa was a sensation. The first impression of 12,000 copies sold out prior to publication in November 1857 and a second impression of 30,000 soon followed. For the first time in his life, Livingstone was wealthy: the sales made him over £8,500 at a time when only about 2% of the population earned over £150 a year.

As a missionary text, a travelogue, and a work of field science, Missionary Travels had considerable appeal. In writing his book, Livingstone’s primary aim was to direct public attention to Central and Southern Africa, which he presented optimistically as an “inviting field” for mission work and commerce. It offered him the chance to advocate a combination of “Christianity, commerce and civilisation” and to encourage British intervention in the continent.

Livingstone’s letters and published narratives provided contemporary audiences with vivid descriptions of the region. Subjects under discussion ranged as broadly as geology, botany, zoology (including the distribution of animals and the effects of hunting), the customs, beliefs and traditions of indigenous peoples, their languages and dialects, human population distribution and movement, inter-tribal conflict, the political situation in the Cape Colony, relations between the Dutch settlers, the British and the indigenous peoples, health, disease and medicine, climate and climate change. His accounts offer a fascinating glimpse of the history of this region. 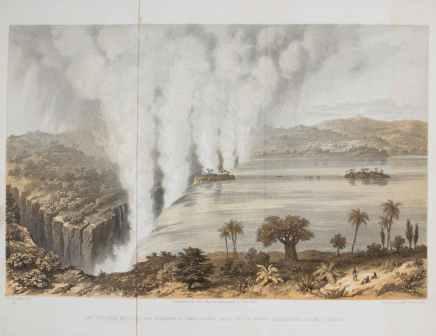 “The Victoria Falls, of the Leeambye or Zambesi River called by the natives Mosioatunya (Smoke Sounding)”, from Missionary Travels and Researches, 1857

“I resolved on the following day to visit the falls of Victoria, called by the natives Mosioatunya, or more anciently Shongwe. Of these we had often heard since we came into the country: indeed one of the questions asked by Sebituane was, ‘Have you smoke that sounds in your country?’ They did not go near enough to examine them, but, viewing them with awe at a distance, said, in reference to the vapour and noise, ‘Mosi oa tunya’ (smoke does sound there). It was previously called Shongwe, the meaning of which I could not ascertain. The word for a ‘pot’ resembles this, and it may mean a seething cauldron; but I am not certain of it.” (Livingstone, 1857)