Results and Trends I: Mavelikkara, Calicut and Mattancherry

Results and Trends I: Mavelikkara, Calicut and Mattancherry

Throughout the 1990s, I worked in a rural paddy-growing area near Mavelikkara town, and wrote about some of the ways in which Gulf migration was shifting the social landscape. Some families from Hindu lower castes were achieving significant social mobility through remittances; their success was having a wider effect upon longstanding caste hierarchies.

In the old agrarian economy, caste status and wealth had been tightly connected, with landowning Syrian Christian, Hindu Nair and Hindu Brahmin families dominating the village scene. While the very poorest and lowest status Hindu groups (the former agrestic slaves) did not have the resources to finance migration or raise loans to get to the Gulf, those who were just a little better off did manage to reach the Gulf, in large numbers. That story was one of spectacular successes.

In the most iconic case, a family from a very low status caste, formerly employed around the village as makers of pappadams, had managed via remittances to purchase the two-storyed home – the ‘palace’ – which was formerly occupied by a family of impoverished Ksatriyas (ruling caste).  For high-caste and orthodox Hindus, this was, of course, at once a joke, a travesty and an insulting affront to Hindu ‘dignity’. For low-caste families, it was inspiring and encouraging, a sign of changing times and the end of what people popularly named as Kerala’s ‘feudalism’. 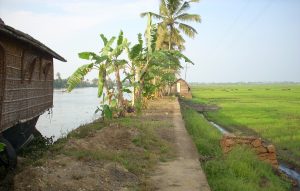 Coconut and paddy in Kerala – a typical rural scene.

There were many terrible failures too over the 1990s, with widescale cheating by brokers, ‘travel agents’ and intermediaries.

In the most depressing cases, we saw men cheated of substantial amounts of money or set to work in miserable conditions by their own brothers in the frantic race to replace thatch and wooden homes with brick and concrete, agricultural subsistence with membership of the emergent consumer society.

From 2000 onwards, I worked in a commercial port town, Calicut (Kozhikode), with a strong Muslim presence and longstanding ties to the Gulf. Commerce, marriages, religious and cultural exchanges have been an unremarkable part of the scene here since at least the 10th century (for which we have written records), and probably long before.

What I found here, was that because Gulf connections were stronger, more longstanding, and more widespread, there were fewer stories of being cheated. People here had the pre-migration information, the social connections and the base capital to get to the Gulf and make a success of it. Migration here was normalised to the point that, as one woman told me, “I am Gulf!”

Part of my REALM study was designed as a return project: what has happened to those migrants who are now returned and settled? Have their children gone to Gulf, or married into Gulf families? What are the reflections of those families whose lives were impacted by Gulf migration?

In Calicut, I gathered plenty of stories, reflections and assessments. I’m writing them up and they will come through over 2019 and 2020.

In Mavelikkara, many closed doors. While the local NORKA group were very helpful, and while several professional returnees gave long interviews and discussions, the group I had been most interested in – those out-of-town rural families who had experienced breathtaking social mobility – were reluctant to talk. I had the sense that many had made their money and were lying low.  I scheduled and re-scheduled interviews and was fobbed off with tea and biscuits, superficial and bland assessments of Gulf life – or met with blank refusals.

MG University student Nick Mathew came with me; it didn’t seem to make much difference. He went alone, without the foreigner; it didn’t help. I knocked at the door of a family who had been very friendly and key respondents during the 1990s – they told me that they had nothing left to say, they were happily and quietly retired. We gave up on collecting more Mavelikkara-rural success stories and miserably gathered the stories of those who were willing to speak: those who had worked in poor conditions, been cheated, or come back without much to show.

As a foreign ethnographer, I’d often experienced suspicion in the early days. Was I connected with the state? Would I inform tax authorities about people’s assets? As a return ethnographer, I am still unravelling the reasons for the diffidence I encountered among so many of the ‘successful returnees’ (which could even come down to simple and reasonable ‘researcher fatigue’ – “What, you, here again?!”)

As remedial action for the project – and to boost morale – I added one new site for research.  Mattancherry is a part of Cochin where many Muslim families live and where many are in the Gulf. This new site proved not only fruitful in terms of interviews (thanks to sensitive and helpful introductions by P. A. Ansari, a PhD student at Aligargh Muslim University, Delhi, who has his roots in Mattancherry) but also an interesting new space to work in. Mattancherry is at once part of and utterly outside of Cochin’s tourist, traveller and globalised spaces of chic coffee shops and heritage handlooms. It is spatially near to and economically / socially distant from Ernakulam’s consumer boom-town, with its malls and hypermarkets. I was welcomed warmly, and people were interested to talk about the Gulf and the REALM project.  Interesting results have come through from the Mattancherry interviews, which I’ll be sharing as I move along.