In continuation of the SOAS Centenary series, we explore the history of SOAS’s buildings through images from the SOAS Picture Archive and other items from the SOAS School Archive, starting with the London Institution building in Finsbury Circus.

The SOAS story began in Finsbury Circus when the Cromer Committee (or Oriental Studies Committee), a body tasked with establishing a centre for oriental studies in London, identified a likely site in the City of London for the establishment of a proposed School of Oriental Studies. The building had been occupied by the London Institution for roughly a century but was in a state of disrepair, and was transferred to the Office of Works under the London Institution (Transfer) Act in 1912. The transfer was enacted with the purpose of refurbishing the building for occupation by the School. 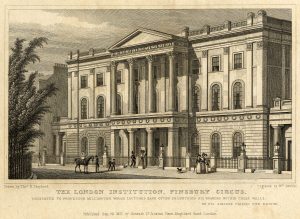 The premises was eventually handed over in early 1917, as the outbreak of war had delayed the work on the building and initiation of the School. The initial development plans for the Finsbury Circus had included a larger wing for ‘higher commercial subjects’, but this was not adopted, partly due to cost, and partly because the draft charter of the School emphasised that the balance between scholarship and commercial instruction (or the instruction of people from commerce) should be weighted in favour of the former. 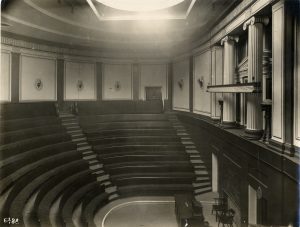 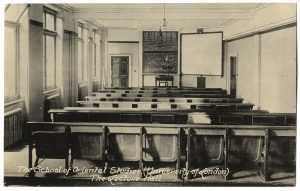 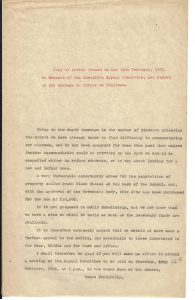 As time passed, it became clear that the original provision of eighteen classrooms was far below the accommodation required for the number of students enrolled at the School, and in 1920 the Governing Body purchased South Place Chapel on the adjoining site. The building was let back to the original occupants with the idea that development would happen when funds materialised. Unfortunately, the money to adapt the building could not be raised, and the site was sold in 1926. A year later, the Governing Body decided to look for a new site away from the City, with sights set on Bloomsbury.

It took 15 years for SOAS to realise its ambition of joining the University of London in Bloomsbury. SOAS remained in Finsbury Circus for 10 more years, before moving temporarily to Vandon House in Victoria. Prior to the move, the present Director Denison Ross composed an ode to the old building, a fragment of which is copied below:

Of Oriental studies where combined

The East is working with the West to teach

The tongues of Afric, Asian and of Ind.”

In March 1936 the building in Finsbury Circus was sold to a subsidiary of the major building firm Holland, Hannen and Cubitts (responsible for the Senate building, University of London, amongst other iconic landmarks) and immediately demolished, drawing a final line under the first phase in SOAS’ history.

The material referred to in this article can be viewed in the Archives and Special Collections Reading Room. Please contact David Ogden, School Archivist, at docenquiry@soas.ac.uk for further information on accessing SOAS’ institutional archives.