The Life and Afterlife of David Livingstone: exploring missionary archives

The Life and Afterlife of David Livingstone: exploring missionary archives

The Life and Afterlife of David Livingstone: exploring missionary archives is running at the Brunei Gallery, SOAS, until May 2014. This blog series will highlight some of the fascinating stories and archives featured in the exhibition.

Based on historical material found in missionary archives held at SOAS Library, and taking as its focus Livingstone’s early years as a missionary (1840-1856), this exhibition seeks to explore the life and after-life of this multi-faceted and controversial man. As well as looking at his career against the wider historical context, the exhibition examines in detail some of the important personal relationships that developed between Livingstone and key African figures of the period, and more broadly at the African response to nineteenth century evangelical mission. 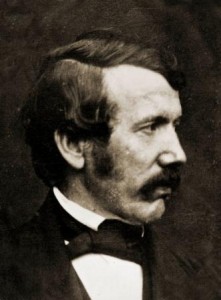 Livingstone was and is a controversial figure. In life, he was criticised for his failure to make converts, for being a poor expedition leader and for making crucial strategic and geographical errors. And yet he was also celebrated in his time as an intrepid pioneer, the epitome of self-help, the Christ-like martyr who ultimately gave his life in his efforts to spread the word of God. Since his death, Livingstone’s famous call for Africa to be opened up to “commerce, Christianity and civilisation” has been levelled against him. He has been blamed for paving the way for the notorious ‘Scramble for Africa’ and the legacy of colonial rule that followed.  As inspiration for the large numbers of missionaries who subsequently went to Africa, he has been linked to cultural imperialism. In his emphasis upon slavery, he has been criticised for creating the image of Africa as the hopeless continent, constantly in need of external aid and humanitarian intervention.

Can one man be responsible for so much? Does he deserve his reputation as an ‘evangelist of empire’?