I argue that there is a direct thread from the PRC’s ‘four modernisations’ launched in 1977 in order to ‘reform and open up’ China’s moribund economic system, to its deep engagement with the MENA region today. The relationship has been built on four types of ‘power’. First the power of oil, to fuel China’s rapidly expanding economy from the early 1990s onwards; secondly, the exercise of China’s soft power as it grew more comfortable in playing in the West’s backyard in West Asia/Persian Gulf subregion; thirdly, Beijing’s growing recognition of its geopolitical power (and influence) in parts of Asia hitherto inaccessible to it (either because of the domination of the Asian landmass by the Soviet state until 1991, or because of the controlling presence of the Unite States superpower in territories west of India even beyond the end of the Cold War in 1989); and finally, its recognition of the role its hard power assets (military specifically) could play in the wake of the 1980-88 Iran-Iraq war which opened the way for Chinese exports of its relatively cheaper military hardware to West Asia and the broader MENA region.

The acceleration of China’s relations with the MENA region was arguably in motion following the end of the Cold War and the lifting of geopolitical barriers to third party entry into regions hitherto dominated by the two superpowers, but this was also facilitated by two further developments. First, China becoming a net importer of oil from 1993; and, equally importantly, by its real ‘great leap forward’ in 2001 following its joining of the World Trade Organisation that put its economic growth on steroids.

China’s transformation into the factory of the world and its sustained double-digit economic growth inevitably raised the country’s reliance, indeed dependence, on imported oil, and particularly from West Asia. So much so that before too long China has become the world’s largest importer of oil, overtaking the United States in the process, with between 40-50% of its oil imports coming from West Asia. Just nine countries held sway over this vital trade for China’s economic prosperity. A new interdependency was thus emerging as oil exporters of West Asia were also increasingly dependent on the Chinese market as the main OECD importing markets were either static or were shrinking as innovative alternative sources of energy were becoming increasingly available, and affordable. The oil exporters of West Asia needed the Chinese and other Asian markets like India for maintaining their economies on an even-keel.

Energy exchange, then, has paved the way for a flourishing trade and investment partnership between China and the MENA region, and the extension of China’s soft, hard and geopolitical tools into this region. The bulk of the oil output of West Asia has been heading east for nearly two decades now and oil imports of China have become one of the largest single items on its annual list of imports. This is the glue binding East Asian-West Asian regions.

Oil set the stage for…

Much, much more. While energy arguably created the conditions for deeper Chinese engagement, relations have grown so much as to acquire autonomous motion of their own. Interactions are now extensive, deepening, and expansive. Amongst the many manifestations of China’s rise in the MENA region, I can refer to the following:

And then came the BRI…

Which has acted as a catalyst for the further deepening of China’s extensive relations with MENA countries, slowly but surely further formalising exchanges in the context of the BRI. The BRI has acted as the new driver of integration across Asia’s regions and reinforcing China’s position as the primary economic partner of this important regional system.

Beyond the immediate impact of the BRI on China-MENA relations, there is also a growing sense of unease in the United Sates about the deepening role and presence of China in this strategically important region, as an arms supplier and diplomatic actor, supplying the US’ adversaries while also assisting America’s close allies in developing their military systems. The West is waking up to the strategic reality that in under 30 years China has managed to change the MENA region’s point of compass away from the West eastwards. For over a century the MENA region was the playground of the West and it is clearly strategically unsettling to see this area of importance become the playground of a new global rival. From the regional states’ perspective, being caught in the crosswinds of global competitions can only mean yet another challenge to manage. While for some the re-emergence of China is seen as a great strategic opportunity for pressing home their economic diversification strategies and political autonomy, for others the prospects of being squeezed between Washington and Beijing is a challenge not to be relished. 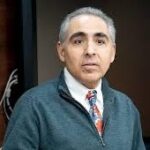 Amongst his recent publications is (with Niv Horesh) How China is Changing the Middle East (New York, NY: Routledge, 2020).