As SOAS marks Black History Month we continue to hi-light historical materials held by Special Collections, which reveal the long-standing Black presence in the UK, as well as the contributions and achievements of Black peoples in local, national and international arenas. This week we look at papers relating to Thomas Birch Freeman (1809-1890), an Anglo-African Wesleyan Methodist minister, missionary, botanist and colonial official in West Africa. 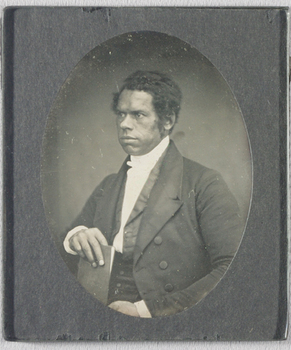 Freeman was born in Twyford, Hampshire, England, on 6th December 1809. Little is known of his early life. His mother, Amy Birch, was English, his father an African freeman called Thomas. He was introduced to Methodism as a boy. Like his father he first worked as a gardener, and was a keen student of botany. He became head gardener to Sir Robert Harland at Orwell Park, near Ipswich in Suffolk. Years later when he was in West Africa, he corresponded with Sir William Hooker (1785-1865), the first director of Kew Gardens near London, on West African flowers and trees.

Freeman was accepted as a missionary with the Wesleyan Methodist Missionary Society in 1837, and following his ordination sailed to the Gold Coast [Ghana], West Africa, arriving in January 1838. In his early months he built the first Methodist Church at Cape Coast (opened on June 10, 1838), extended preaching and schools along the coastal plain, and identified a young Fante preacher, William de Graft, as a suitable minister. He then made his way to Kumasi, capital of Ashanti, forming a relationship with the Asantehene and other important chiefs. In 1841, taking de Graft with him, he visited Britain to appeal for funds and recruits for expanding the work. The publication of his Kumasi journals made him a celebrity. His pioneering work in founding many mission stations and chapels in the area underpinned later Methodist success in Ghana, Western Nigeria, Benin and Togo.

Financial controversy and other difficulties caused him to retire from missionary work in 1857, and he took the government post of administrative and civil commandant of the Accra district between 1857 and 1860. He subsequently remained in the Gold Coast, farming, writing, and preaching. In 1873, he reentered the Wesleyan ministry and returned as a missionary, to serve in Anamabu, West Africa, 1873-1879 and Accra, 1879-1886. He retired and settled at Accra in 1886, dying there on 12th August 1890.

A detailed biographical account of Freeman’s life can be found on the Dictionary of African Christian Biography.

SOAS Special Collections holds papers of and relating to Thomas Birch Freeman within the Methodist Missionary Society archive. Papers comprise his journals, 1837-1845; letter books, 1848-1864; correspondence with colleagues, friends and associates; manuscripts recording the work of the Wesleyan Methodist Missionary Society in the Gold Coast District including Freeman’s history of the rise and progress of Wesleyan missions in the Gold Coast district to 1838, and typed transcript [20th century] of Freeman’s reminiscences [1884] of the Gold and Slave Coasts, including his extensive travels in the region, and manuscripts and papers on finances or the raising of funds in the Gold Coast District.

Researchers can access this material (much of which is consulted on microfiche owing to the fragile physical condition of originals) in the Special Collections Reading Room.