Home/Do You Belong to Worthing?, Uncategorized/Smells like grease … and racism.

By Caroline Osella|April 12, 2018|Do You Belong to Worthing?, Uncategorized|1 comments

Coast Cafe used to be a small, too-busy, hole in the wall which smelt of cooking grease and served, ‘we’ve got beachfront monopoly’, priced Brit food.The outdoor space there and the music scene was good – but as a cafe, there’s plenty better. Then suddenly, Coast reappeared as a huge venue, spreading beach-to-park, proper inside toilets, table service, expanded menu and a host of staff. And it’s still really puzzling to try to work out where all this space was before. Maybe it’s down to some kind of Faustian deal between planning committee, business owners, and the sea-sprites who own the land and agreed to expand the ground space by necromancy in return for free baked camembert for life. The smell of grease still lingers and Coast is still too busy, but sometimes you simply want the sea. In that moment, like similar beachfront venues Perch, Bluebird and Sea Lane, they’ve got you over a barrel. You don’t go to a beachfront cafe primarily for the quality of the food or the keen pricing. Or for a bit of peace.

Hoping to find some space, we climb upstairs, where the weekday morning crowd turns out to be no less pressing and we have to share a table with a well-dressed and lipsticked white lady over 60. She’s with her son – beard, big-specs – and chubby-cheeked blonde grandson, his floppy hair way too long, in a  way that’s already marking out his social class at age three. She’s waiting for her tea for ages. Let’s nip in there, then, and ask her the do-you-belong-to-W question. Her immediate and emphatic answer is impressive in its frankness, unpleasantness, and utter unselfconsciousness: “Yes, I do, and it’s so much nicer than Brighton. Brighton is awful. The seafront is supposed to be getting a bit better. But there’s so many foreigners”. I’m wrong-footed by her confidence to speak this, to say it to my face, to assume that it’s ok to say something like that – in such a loud voice, in a public cafe, with so many people overhearing. I’m also now wondering what kinds of arguments she might have over Christmas dinner with hipster son – or does he agree with mother? Trendy specs and a well-groomed beard do not a liberal make, just as a number-one head shave no longer makes a skinhead (though floppy hair still apparently makes a toff). I’m wondering how many Worthing folk count relative Englishness as a mark of the area’s ‘quality of life‘?  And for blog-readers who complain that we keep banging on about ‘racial issues‘: her response is indicative of how WoBY keeps tripping over it everywhere. Her self-confidence in speaking aloud offers a great example of entitlement., while her choice to speak this way to me ( a fellow white woman) signals the challenge of complicity.  Do we have any idea how many Worthing folk share this woman’s unashamed and unquestioned opinions? 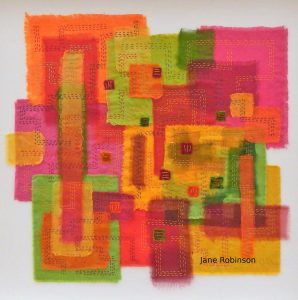 Colours of Rajasthan   http://www.janerobinsontextiles.co.uk/  https://www.facebook.com/Jane-Robinson-Stitched-Textiles-and-Mixed-Media-1650509315172754/                 Jane Robinson – Textle Art in Worthing. Jane prints and dyes her own fabric, which she then turns into textile art using a combination of hand-stitching and the sewing machine. Inspiration comes from a variety of sources, including rocks and fossils, plants and leaves, and designs from other cultures. The colour and sparkle of India has a particular influence on her work.