By Caroline Osella|February 5, 2018|Do You Belong to Worthing?, Uncategorized, Worthing|0 comments

Sensing movement, Woby* grabs the hem of the Bard’s cloak. The rush pulls Woby in and makes terrifying MRI scan noises as the energetic Bard flips upside down, makes the necessary secret hand gestures, and thereby gets sucked through the angelic wings. It’s not ideal to go through a portal by holding onto somebody else, but Woby hasn’t yet managed to get those hand gestures right, much less perfect a headstand.  As the pair emerge, coughing from the damp air, dizzy from the rush, Woby looks around in hope of a drink that is not flat white or coconut latte, and notices that their companion’s cloak is gone. We’re in the present company, then, not of the unofficial Bard, but of Joe Bunn, longtime resident of Worthing and payer of council tax. “Pizza! – Do you fancy pizza?”, yells Woby, wondering which of the six options to choose in this magnificently pizzeria-endowed street (with Domino’s nowhere in sight). Worthing’s own Little Italy, where we can speak Italian, eat gelato and even get cannoli and an espresso which knows what it was born for. Although there’s more Germans than Italians in the area, Worthing doesn’t boast a street full of German restaurants. This saddens Woby, as we could do with some decent open-air food stalls – Worthing’s Food and Drink festival was hugely disappointing and the fairground cheap burger stall a bit of an ugly shock in these days of designer food vans. Let’s hope for the Italian example to spread and inspire some Germanic start-ups, bringing much-needed woodfired salmon (and marzipan) to us, and also more Worthing Christmas markets.

“Eat your pizza, Joe – and tell us about our question: Do you belong to Worthing?”

Joe’s response is unexpected, and disheartening.

I don’t feel like I belong to Worthing. I don’t even belong In Worthing. There is no particular group that I’m a real part of.

“That’s ok sweet-cheeks – the creative space is always a liminal one.”

Even the outsiders won’t have me in their gang because I’m not weird enough, and you can’t force that sort of thing.

Two turquoise tears well in the corners of Joe’s eyes, roll down his cheeks, and leave little-mermaid train tracks in the grooves at the side of his nose. Woby averts their eyes, hoping not to see turquoise snot, which would ruin the pizza moment, and mutters through a mouthful of mozzarella –

“Ah, the willfully avant-garde, the fundamentalists of cultural life, drawing strength from defending their boundary.”  Woby carefully removes an anchovy, shuddering, and listens on…

The place I’ve always felt most at home isn’t a town, but rather a bus or a train. Traveling to somewhere. I belong in that moment.

“Yes!  We get that. Process. Becoming, not being, Joe. It’s all there is. Eat up! Mozzarella will give you horrible indigestion if you don’t eat it fast. Come on, honey-child, it’s good pizza”.

I moved back here after university, thinking I missed it but I realised after a couple of years of attempting to convince the people of Worthing of its own merits that no one wants me to do that.

“Not true, baby – your people are here. They didn’t all find you yet.”

As Joe wipes his eyes and cheeks, smearing his face a gorgeous peacock blue, Woby tenderly feeds him a slice of quattro stagioni, making a careful bet as to which stagione to select.

It’s the people that help me to know that I don’t belong here. I feel like Peter Pan in Neverland. I can fit in. I can even fly here. But it’s not my true home.

“That’s ok, Joe, actually. Home is over-rated. Let’s go wander a bit, stay out, see what mischief we can find. Do you mind if I finish off your black olives?”

The funny thing is, that when we add up all the folks who feel and know themselves not to be part of the mainstream, they’re a majority – because mainstream is not the same as majority.  And that means that there are plenty of spaces, moments, scenes, which escape and overspill and exceed the mainstream. There’s also a certain unstoppable momentum by which even the mainstream get changed, and even against its own will, by the influence of the minority. Thank God. Hold on, Joe, hold on, and don’t be tempted to leave us. Worthing is coming to meet you. And you are ever-becoming. 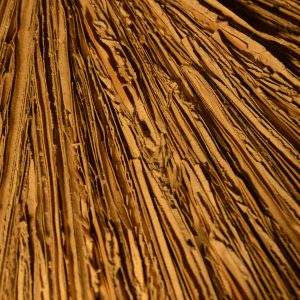 Bark, Rachel Williams. Previously a Props Maker and Sculptor, Rachel has experienced various processes and materials, but until recently had considered cardboard far too rudimentary.The new passion for cardboard was discovered in recent years; a fairly plentiful supply of recyclable materials and a desire to create sculptures with the minimum environmental and maximum visual impact, coupled with a motive to streamline her practice, the style was born. Exploring the material’s potential, she sees endless possibilities in its different characteristics and relishes fashioning unique textures, patterns and forms.A love of the natural world and environmental issues has a great influence in all her work; the English countryside provides inspiration,