By Caroline Osella|October 26, 2017|Is Worthing the New Brighton?, The English Seaside Town and Whiteness, Worthing|0 comments

We’re in The Orchard cafe for their vegan tea event.  There’s 7 of us, in a chock-full cafe (tickets sold out weeks ago), and we look around in wonder, interested to know who are the vegan-or-vegan-curious of Worthing, then? There’s an all-ages crowd, including some very glamorous young folks, a sprinkling of beard-and-tattoo dudes, at least one person who has been vegan since the 1970s – and a baby whose excited face makes plain that this is probably their first ever Sunday high tea. Teas and coffees served, food appears. Onion bhaji with mango chutney; creem cheeze and cucumber; shredded veg wraps; scones with jam and something yummy – is it whipped coconut cream? And cake. All kinds of cake, including (inevitably) a carrot one and brownies. We have a highly animated discussion about parking and the outrageous costs and restrictions of Brighton / Hove (where at least three of us have moved into Worthing from). Parking – as synechdoche for general ease and cost of living – emerges in discussion (yet again) as one clear reason why, for many here, Worthing is nothing like Brighton, no matter how many vegans live here. As the chomping eventually grinds to a halt and the woman next to me pops her diabetes pills, laughing as she acknowledges the irony, our opposite neighbour pulls out a pack of white poppies. Some folks at the table know about them and are happy to get a chance to buy – they can be so hard to track down. Some have never come across them, and are intrigued to know that it is possible to respect and remember the victims of war (all the victims of all wars) without glorifying or supporting nationalism or militarism, or indulging in what sometimes feels like a national pastime of whitewashed war nostalgia. The Peace Pledge Union supporter does a brisk trade and many of us pick up leaflets. “If you’re brave enough, you can go up and lay a wreath of white peace poppies whenever there’s a ceremony where they’re laying red ones”, somebody tells us. We’re wondering precisely how brave you’d need to be, to do that, in Worthing? 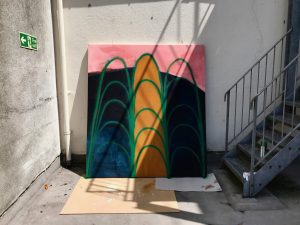 Sara Dare is a painter and installation artist. Predominantly working on large-scale canvases, her approach seeks to incorporate an awareness of the environment that surrounds the work and the conversations between them. Themes within Dare’s practice explore the relationship between process, environment, scale and ambiguity of form through an abstract and instinctive language. Playful and often psychologically charged shapes and objects examine notions relating to repulsion, lure, conflict and presence.