As I reminisce the Ph.D. fieldwork trip to New Delhi, the earliest memory that comes to mind is social activist Aruna Roy telling me about how she and her colleagues were described as “urban Naxals” by a right-wing Hindi language publication in Rajasthan. That term was originally used by the filmmaker Vivek Agnihotri in his 2018 book, which became wildly popular as a label for any left-leaning intellectual or activist who was critical of the ruling Bharatiya Janata Party (BJP). The publication also cast an accusatory net over the users of India’s Right to Information Act, describing them as trouble-makers having ‘Naxalite’ intentions.

Naxalites are left-wing extremists who employ violent means to overthrow the state. But Roy, a prominent figure in India’s right to information movement, has long held that laws such as the RTI Act, 2005 would help eliminate extremist tendencies among disgruntled social groups by giving them a chance to meaningfully participate in governance.

I had just begun field research on the subject of India’s right to information movement back then, and it was evident that the political climate in the country was no longer conducive to rights-based activism after the BJP had returned to power for a second term in May 2019.

In October 2020, India observed the 15th anniversary of the passage of the Right to Information Act, 2005 amidst concerns regarding the shrinking space for dissent. Advocates of the transparency law were increasingly finding themselves threatened by government action under one pretext or the other. In August 2019, when citizens protested against the hasty amendments made to the RTI Act, I was witness to how a group of citizens led by transparency activists in Delhi were rounded up by the police when they tried to submit a petition to the President containing 5000 opposing signatures, pleading him not to give assent to the amendments.

A day before I returned to London in October, one of the transparency activists I interviewed in Delhi, told me that she and a few of her activist friends were questioned by the Delhi Police for participating in the anti-CAA (Citizenship Amendment Act) protests in February. 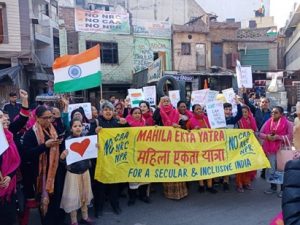 In December 2019, the Indian Parliament passed the CAA law, which strikes at the root of India’s secular identity, by making religion a basis for granting citizenship. The activist along with other opponents organised a Mahila Ekta Yatra (women’s solidarity march) and visited different Muslim neighbourhoods in Delhi to express solidarity with the protests. The women read out the preamble of the Constitution, which declares India to be a sovereign, socialist, secular, and democratic republic, promising equality to all citizens under the law. The Delhi Police, in one of the charge sheets filed on the 2020 Delhi riots, has framed the Mahila yatra, among those held guilty of inciting communal violence in North-East Delhi.  The police has subsequently stonewalled several right to information queries on its riots probe.

One may well ask, why the targeting of a few prominent activists should concern the Indian right to information movement, at large? The answer lies in the fact that the RTI Act was passed on the basis of the fundamental rights guaranteed to citizens in the Constitution. On October 12, the day India commemorates ‘RTI Day’, an online meeting of activists and campaigners from across the country organised by the National Campaign for People’s Right to Information (NCPRI), became an occasion for highlighting the increasing threat to freedom of speech and expression simultaneously threatening the people’s right to information as well. After all, both the rights flow out of Article 19 of the Constitution. The RTI Act was enacted to empower the ordinary citizen to ask questions of the conduct of those running the affairs of the government. But as the space for dissent shrinks, the concern was who would dare to question the government now? Using the RTI law in India comes with an element of risk, as hundreds of users have been attacked or even killed for exposing corruption or other wrongdoing.

Harsh Mander, a former bureaucrat, who quit the Indian civil services after witnessing the Godhra riots in Gujarat, spoke at the NCPRI meeting about how the Indian government was criminalising dissent by using the sedition law and the Unlawful Activities Prevention Act (UAPA) against protesters. A founding member of the NCPRI and a veteran of India’s right to information movement, Mander is one of the activists named in the Delhi riots charge sheet for addressing an anti-CAA meeting. He decried the manner in which the government has actively withheld information from the public of late. Referring to the instance of how the government dodged a question in Parliament on the death of migrants and jobs lost during the COVID-19 lockdown, Mander observed that this was an antithesis of Section 4 of the RTI Act, which obliges the government to make mandatory disclosures in the larger public interest.

Another blow to the right to information movement comes from the amendment to the FCRA [Foreign Contribution (Regulation) Act] in 2020, which restricts public officials and NGOs from raising foreign donations. An RTI activist, affiliated with an international NGO, privately told me that the FCRA amendment could jeopardise the NGO’s functioning, as most of their funding came from foreign sources. In September, Amnesty International’s India office shut shop after being accused of raising foreign funding illegally inciting fear among other organisations engaged in similar work.

Despite these discouraging developments what stands out in the end is the unwavering enthusiasm exhibited by ordinary Indians in exercising their right to know. Venkatesh Nayak, head of the Access to Information programme at the Commonwealth Human Rights Initiative, said that since the RTI Act was passed in 2005, over 30 million queries have been filed under the law. In 2018-19, Indian citizens filed over 1.3 million information requests, which was significantly higher than the appeals registered in previous years. If anything, the robust use of the law is an indicator that no matter how hard the government tries, the spirit of public inquiry cannot be suppressed.

[Vidya Venkat is a post-fieldwork PhD candidate in the Department of Anthropology at SOAS, University of London. Her thesis is tentatively titled ‘India’s Democratic Revolution: Right to Information and the anti-corruption discourse’.]