Voter apathy in Mumbai? Not in the BDD Chawls. by Jonathan Galton

Home/General/Voter apathy in Mumbai? Not in the BDD Chawls. by Jonathan Galton

Voter apathy in Mumbai? Not in the BDD Chawls. by Jonathan Galton

Mumbai is often derided as a city uninterested in politics. “Maximum City, Minimum Voting” sneers a recent Economic Times analysis, pointing out that even Mumbai’s uncharacteristically high voter turnout in 2014 lagged behind Delhi’s by nearly 15%. Hard statistics notwithstanding, voter apathy is scarcely in evidence in Mumbai’s chawls, cramped tenement blocks constructed to house the city’s army of migrant labourers from the late 19th century onwards. Once bastions of communism with an active trade union movement, these chawl neighbourhoods have more recently proved a fertile ground for the spread of the Shiv Sena, a prominent regional party promoting the combined interests of Hindu nationalism, global capital and the so-called “Marathi manoos”, or ordinary Marathi speaker.

In the BDD Chawls of Lower Parel, for example, the Shiv Sena enjoys strong support among the Marathas, a Hindu caste cluster that constitutes the neighbourhood’s most socially dominant community. Indeed, the Shiv Sena has penetrated deep into public life, notably providing patronage to the neighbourhood associations that organise religious festivals, sports competitions and welfare activities. The current Corporator (municipal representative) and MLA (state representative) both belong to the Shiv Sena, as does the sitting MP for Mumbai-South, Arvind Sawant. He is running for re-election this year as part of the BJP-Shiv Sena alliance that is a dominant force in Maharashtra politics today. An early fillip for this alliance came from BJP Chief Minister Devendra Fadnavis’ November 2018 announcement of a 16% quota for Marathas in education and public sector jobs, although delays in passing the bill may actually have the opposite effect.

Next to the Marathas, the Dalit Buddhist community is the other major social grouping in the BDD Chawls. Formerly members of the untouchable Mahar caste, the community converted to Buddhism en masse in 1956 following the lead of Mahar-born social reformer and law-maker Dr Babasaheb Ambedkar. The community’s political profile is distinctly different to that of the Marathas. Where local politics is concerned, the BDD Chawls Buddhists have typically thrown their weight behind the RPI(A), a faction of Ambedkar’s Republican Party of India, now led by Ramdas Athawale. Among the Buddhist community, the RPI(A) has a role in organising local functions and charitable activities comparable to the Shiv Sena’s role among the Hindus. 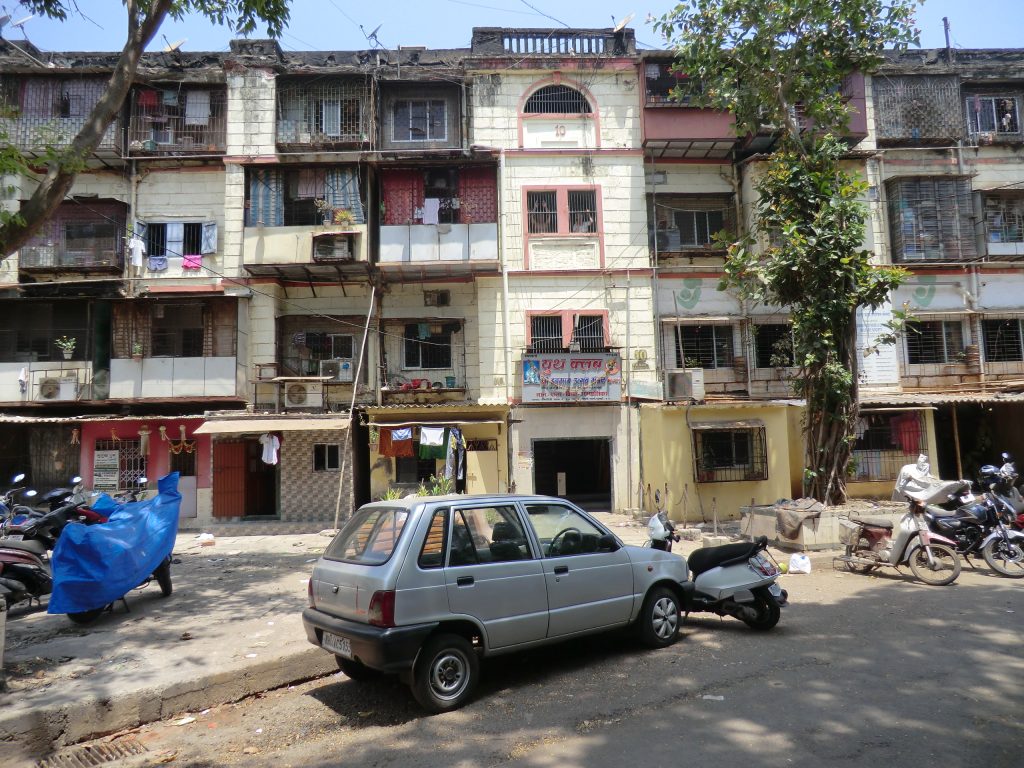 Recently, however, there has been an increasing scepticism in the community towards the figure of Athawale himself, not least due to the alliances he has struck with the BJP in previous municipal elections. Since the RPI(A) is not, in any case, fielding a candidate for the Lok Sabha elections, large numbers of the Buddhist community have turned their attention to another alliance called the Vanchit Bahujan Aghadi (VBA) or “Deprived Majority Front”. Touted as a possible third front  between the BJP-Shiv Sena and Congress-NCP coalitions that dominate Maharashtrian politics, this coalition is a joint venture between Prakash Ambedkar (grandson of Dr Babasaheb Ambedkar) and Asaduddin Owaisi, president of the All India Majlis-e-Ittehad-ul-Muslimeen (AIMIM).

Prakash Ambedkar’s leadership during the anti-Dalit violence that engulfed Maharashtra in January 2018, and the credible inclusion of Muslims into the Bahujan fold through partnering with AIMIM, have boosted the VBA’s profile, although some sceptics argue that to vote for the VBA is simply to splinter the opposition to the BJP-Shiv Sena.

Dr Anil Kumar, the VBA candidate for Mumbai-South is a cardiologist, contesting the election on a platform promising healthcare, educational opportunities and hygienic living conditions. Prominent RPI(A) activists from the BDD Chawls have indicated their support for Kumar while publicly protesting Arvind Sawant’s bid on the basis of what they view as a dishonestly managed neighbourhood redevelopment project which has BJP-Shiv Sena backing. As Marathas fixate on getting the reservations they feel entitled to and Dalit Buddhists mobilise in favour of a newly energised political movement, it seems that in the BDD Chawls, at least, there is no room for voter apathy.

Jonathan Galton is a PhD candidate in the Anthropology Department at SOAS. His research focuses on questions of belonging and difference in the BDD Chawls neighbourhood featured in this article.