SOAS South Asia Institute (SSAI) represents the most extensive and diverse community of scholars working on South Asia of any university in Europe.

SSAI has a growing number of partnerships with universities and research institutes in South Asia which provide a basis for mutually beneficial collaborations in both teaching and research.

When Music, Truly, Is Unbound: By Kunal Purohit

When Music, Truly, Is Unbound: By Kunal Purohit

Music and poetry transcend boundaries of time, of space, of culture. This is known. But, not often does a 15th century Kabir effortlessly flow into a 20th century John Lennon creation. Or that you find, in Leonard Cohen’s work, the echoes of Asian poets from the 17th and 13th centuries. Similarly, when injustices of caste and class even in the United Kingdom find articulation in the works of Dalit poets. 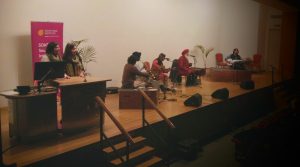 Like it did on November 20, when an ensemble of artists, practicing very different musical styles and coming from very different contexts came together. The line-up included famed Sufi musician Madan Gopal Singh and his group, Chaar Yaar. It also included Rasika Ajotikar, a PhD student at SOAS whose voice brought alive the struggles of caste and inequality in contemporary India, captured in the works of Dalit activist poets. Across the border, from Pakistan, was classical singer Sara Kazmi whose music revolved around various themes, be it fighting patriarchal structures or caste-based exclusions.

But, the vastness, the endlessness of the craft on display, the poetry from a distant era, also made a statement louder and clearer than what most could. The concert came in a year which is the 70th year of separation between India and Pakistan; seven decades from the time when arbitrary lines were drawn separating what never really was distinct from each other till then.

This past, then, became a pertinent backdrop for the concert to be held in. However, as artist after artist came and performed, the idea became increasingly clear: the past was not just a backdrop, it never really remained out of the conversation. If anything, the recurring reference to the past, be it to the work of Sufi poets from centuries ago or the re-imagining fables from history, made it clear that the past lent perspective to understand the present and imagine, re-imagine the future.

The past and the present played hide and seek through the evening, with one peeping from behind the curtains while the other was being dissected. Patriarchy existed even among the Sufi poets centuries ago, said Madan Gopal Singh. Sara, on her part, alluded to Heer, invoking Bulle Shah’s work on her. 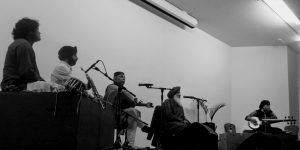 The evening was political at its core, but at the same, touched the personal in many different ways. Questions of the self, those of identity, the questions of existence, all these questions were being thrown at a mesmerised audience by the artists in their own ways. Rasika’s vocals brought to life the lived realities and struggles of Dalits and the ill-treatment perpetrated by the State and its structures alike. The music made one squirm in their seats, because such music often provokes while it engages. Dalit activists like Sheetal Sathe and Sachin Mali, who were denied a visa to partake in the concert, then turned this bureaucratic strangling into art, with a poem linking this denial of a document to the larger battles of rights that the community faces. The personal became political, the political became personal.

Music also heals. When night fell, Madan Gopal Singh and his Chaar Yaar had demonstrated just how well it does.

Kunal Purohit is a journalist, currently working with the SOAS South Asia Institute as a Research Assistant and an Executive Officer.
Dalit RightsMusicPatriarchyPoetrySOASSouth AsiaSufism
Share this Post: