Memories of Partition – 70 years on by Farzana Whitfield

Memories of Partition – 70 years on by Farzana Whitfield

Farzana Whitfield is the subject librarian for South Asia and Development Studies at SOAS. Here she looks back on her family’s personal experience and memories of Partition.

This article has previously appeared on SOAS’s library blog.

This August marks 70 years of India’s independence from British rule (15th August) giving birth to 2 nations- a Hindu majority India and a Muslim majority Pakistan (14th August). Subsequently there were 3 wars between India and Pakistan over Kashmir. Bangladesh went on to become a country in 1971 after it fought to be free from the name East Pakistan.

While growing up, I can vividly recall the 1947 partition stories that my father would share with my siblings and myself. They were harrowing, emotional and yet at the same time empowering accounts of what dad and our family had to overcome. It will remain with me forever as the struggles that were endured by both my parents to survive.

Personal testimonies include my Daadee, Daada (paternal grandmother/grandfather) and my youngest uncle having to flee their home in Agra after their Sikh neighbours warned them that there was a group making its way down the street slaughtering all Muslims. With the cooker still burning, my grandmother turned to gather up some food to take with them. The neighbour shouted that there was no time, that they must run for their lives.

Another incredible story is when dad along with his middle brother had to flee their boarding school in Delhi and found themselves in a compartment with a Hindu family. The father of the family recognised my dad because he had worked on the railways with my grandfather as a station master. The train had to stop because of a blockade across the line. The train doors were being flung open and all the Muslim passengers were dragged out and stabbed to death. This was also happening vice versa, Muslims killing Sikhs and Hindus. My Grandfather’s work colleague passed the boys off as his own sons, so they were saved.

Dad always told us that during his school pre-partition days, Hindus, Muslims, Sikhs, including Parsees and Christians lived side by side harmoniously and although there was much bloodshed between the faiths these moving stories tell us otherwise. Our family owed a lot to those who went out of their way to protect and save lives. No matter what faith you belonged to, all hailed from the mother country- India.

SOAS Library holds rich resources on Partition including oral archives covering testimonies for people who lived through the partition history. The interviews (collection reference: OA3) were conducted by Andrew Whitehead for BBC for the radio series on India: A people partitioned, 1997. The interviews centre on Partition among ‘ordinary’ people of Hindu, Muslim and Sikh heritage.

The recordings cover many of the key events of 1946-1947, including survival stories by women enduring violence; the Indo-Pakistani war of 1947, refugees, future cultural and political figures of South Asia. The testimonies include Hindi, Urdu, Bengali and Punjabi (most with a running English translation). They also include each and every written transcript, encapsulating the rawness of what it felt to be there, witnessing such trauma and upheaval.  Rapes, abductions, communal and religious conflict are all reflected through these emotional pages. 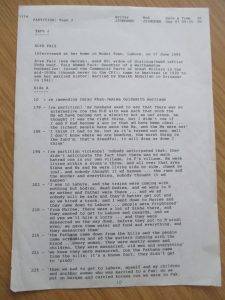 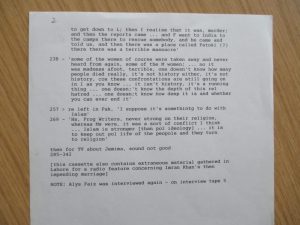 There are letters and diaries too from Presbyterian mission stations in East Bengal and encounters of the people that lived through the partition. Rare books include a collection of frank and emotional letters between Gandhi and Jinnah over the state of India dividing and the conception of Pakistan. 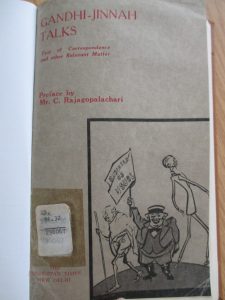 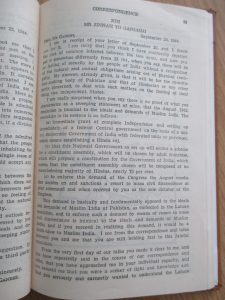 Historically known as the largest mass migration during human civilisation, Partition in the sub-continent has left everlasting memories and stories that will remain with us. SOAS’s archival resources superbly reflect upon this profound period in South Asian history.

Recordings of the oral histories and transcripts can be accessed in the Special Collections Reading Room, SOAS Library. Contact archives stafffor further details.