‘The pathologies of trust and distrust in Pakistan’ by Amina Yaqin

‘The pathologies of trust and distrust in Pakistan’ by Amina Yaqin 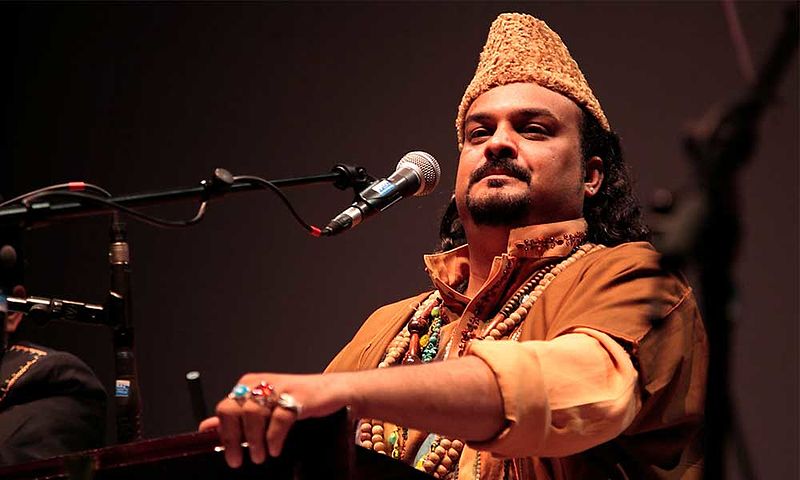 Amina Yaqin is Senior Lecturer in Urdu and Postcolonial Studies in the Department of the Languages and Cultures of South Asia, SOAS.

The recent assassination of the renowned qawwali singer Amjad Fareed Sabri in the name of piety in Pakistan has revived the question of the permissibility of music in Pakistani culture. Sabri was shot on June 22nd 2016 by attackers on a motorcycle while he was driving his car in Liaquatabad, Karachi and he succumbed to his injuries in Abbasi Shaheed hospital. Acknowledged as a ‘targeted killing and an act of terrorism’ by Inspector General Mushtaq Mehar this premeditated crime in the sacred month of Ramadan of a devotional singer from a renowned gharana adds to the ongoing battle over national culture in Pakistan that is being played out between ‘wahabi’ and ‘Sufi’ Islam. It puts qawwali centre stage as a musical form to be distrusted in an Islamic nation and identifies those who associate with it as lacking in piety although ironically that is the original purpose of the music.

The legacy of qawwali is rich and complex. It is a form that has evolved from its local roots at the sufi shrine to its mixed rendition through modern representations of recorded music that have become familiar to us through the global contemporary sound recordings of Nusrat Fateh Ali Khan. The 45 year old Amjad Sabri comes from a long line of qawwals with a family tree claiming to go back to the sixteenth century with ancestry to the musician Mian Tansen from the Mughal emperor Akbar’s court. Sabri took over the mantle from his father and uncle performing nationally and internationally and gained popularity for his renditions of ‘Bhar do jholi’ and ‘Tajdar-e haram’. His qawwalis are consumed locally and globally through broadcasting, recordings, youtube channels and recently and controversially in popular film.

It is of significance that the Tehreek-e Taliban Pakistan Hakimullah group has claimed responsibility for his murder. This suggests a connection with an earlier allegation against Sabri levelled by the hardline Shuhada Foundation, Lal Masjid in 2014, when Sabri alongwith Geo TV and ARY were accused of airing a blasphemous qawwali “Ali ke sath hai Zahra ki shaadi” on national television. Scholars, commentators and analysts have rightfully argued that the Blasphemy Law needs urgent review to curb the inflammatory webs of mistrust that pit ordinary citizens against minorities. But can the implementation of state legal systems without dialogue and consensus amongst the citizenry work? The murder of Amjad Sabri should not be seen in isolation from other killings of lesser-known cultural representatives across Pakistan, however where some of those fail to grab global headlines this attack opens up a conversation that considers the untrustworthiness of the state in looking after cultural representatives of Sufi Islam. In the midst of violent attacks on culture, who can trust whom, and how can the state establish its trustworthiness to the people of Pakistan as worthy custodian of diverse cultural values?  There remains the matter of morality and ethics in matters of violence. I cannot claim to answer what might be the purpose of killing Amjad Sabri but I can try to make sense of it and in doing so I have to give the terrorist my attention. Why? According to the philosopher and scholar Annette Baier terrorists are typically ‘angry or resentful about something, but it is very easy to deceive oneself about what it is that angers one’. We are all angry but morality teaches us not to be violent. However we are nurtured by violence in the formation of the nation-state, and its religious and civil wars.

Sabri’s murder is part of reiterating a brand of Islamism that rejects the plurality of Muslim communities and cultures and instead acts through violence to create a monotone Islam that is deterministic, exclusive and intolerant. It replicates targeted acts of war in Karachi, also echoed in the attacks on the Christian community in Lahore. They challenge the status of governance and security questioning the rights of minorities in Pakistan through righteous violence and of those who do not follow an orthodox path.  This is not the first time that Sufism (I use the term broadly here) has come under attack, the Sakhi Sarwar shrine in DG Khan was attacked in 2011 during the annual festival and there are many other instances in other parts of the country.

Sufi music has been appropriated in the war against extremism and radicalisation to capture the hearts and minds of youth culture. In his book Rebel Music Hishaam Aidi maps the ambivalence of Sufism as an idea in European colonial thought both troubled by its resistance and encouraged by its cosmopolitan mysticism. The latter has come to prominence in the war against terror. He speaks of the “Sufi strategy” in Pakistan and in Britain. ‘The promotion of Sufi music and institutes that produce qawwali was at the heart of these initiatives, locally and internationally’. In Pakistan, military dictators and democratic governments have all had a Sufi strategy and shrines with their popular sufism have provided a canvas for reform, modernization and state legitimization in various guises over the years. Under General Musharraf’s ‘enlightened moderation’ programme Sufism was appropriated as the softer side of Islam compared to movements informed by Deoband and Ahl-e Hadith traditions. Musharraf appointed a National Council for the Promotion of Sufism which aimed to promote values of tolerance and project Pakistan’s “soft power” abroad. This state-sponsored Sufi approach has had a reactionary response as it feeds into Islam as a political ideology over lived experience.

Researchers have argued that Islamist ideology has been fostered in Pakistan through the ideological wrangle over the role of Islam as decreed by the state and the proxy cold war played out on Pakistan’s borders giving birth to the Taliban, supported by Intelligence Services, the Pakistan Army and foreign interests. In the current political climate distrust shadows trust over democratic governance, the state’s failure to establish security and its continued reliance on the armed forces to establish peace in the region. There is ideological warfare over what is permissible in an Islamic nation. Acts of terrorism such as this one confirm a moral and ethical failure of both the state and the representatives of disaffected groups who use culture to justify targeted killings spreading hate in society taking the vulnerable toward a closed system of revenge and resentment. Unfortunately when grievances are played out between state and non-state actors violence becomes normalised over dialogue as a means of achieving social justice. Amjad Sabri prayed to God, ‘Illahi men tujh se dua mangta hun, marizon ki khatir shifa mangta hun, illahi men tujh se dua mangta hun, karam mangta hun, ata mangta hun (Dear God, I pray to you to ask you to cure the sick, to ask you for benevolence, for your blessing). His prayer has been taken away from him but he leaves us with his love and devotion for the Prophet, ‘Bhar do jholi meri ya Muhammad… laut kar main na jaoon ga khali (Fill my soul O Mohammad, I will not return empty handed)’. It is that power of love and empathy that we need to find to mend the trust that has been lost.