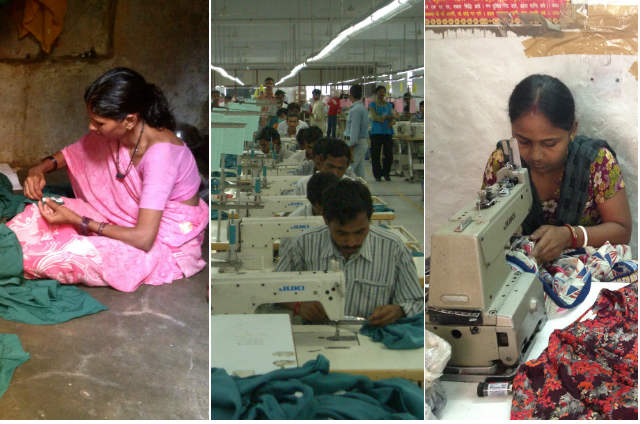 Homeworkers and factory workers in the garment industry, Delhi, India.

Alessandra Mezzadri is lecturer in Development Studies at SOAS, University of  London. Her research interests focus on globalisation and processes of labour informalisation; materialist and feminist approaches to global commodity chains and global industrial systems; labour regimes, labour standards and CSR; gender and globalisation; and the political economy of India.

Three years after Rana Plaza, garment workers worldwide still endure poor working conditions. The industry has witnessed several ‘minor’ disasters and sweatshop scandals since then. In Cambodia, a garment factory outside Phnom Pehn collapsed and fell into a pond a month after Rana Plaza. Images of garment workers swimming to safety amidst floating pieces of clothing appeared in major newspapers (O’Keeffe K. and Narin, 2013). In 2014, Cambodian garment workers were subjected to a wave of state-based violence (Sotheary, 2014). The industry made news yet again in February this year, when the sports’ gear giant Rip Curl was named and shamed for producing in North Korea, where many factory workers endure ‘slave-like’ conditions, according to Labour Behind the Label. The label on the clothing read ‘Made in China’. Rip Curl declared they had no idea their goods were being made in North Korea, blaming unauthorised, hidden subcontracting by suppliers.

The common narrative is that, while labour standards might work in tier-one factories (those with direct relation to the global buyer), the problem – so the story goes – is that many tier-one factories further outsource production to ‘unauthorised’ sub-contractors. This is a key message in the recent Stern report, whose focus on informal garment units beyond tier-one factories unveiled several noteworthy issues and sparked fierce criticisms (See Anner and Bair, 2016). In particular, it questions the coverage and effectiveness of the Bangladeshi Accord on Fire and Building Safety (the Accord).

While the report triggered a healthy debate on the effectiveness of new international policy instruments, some of its policy lessons are overly simplistic. Reframing the problems of the garment industry as mainly one of hidden subcontracting is risky business. According to this reading, problems simply arise because agents do not stick to the ‘rules of the game’. Failures in regulation are only seen as the outcome of ‘exceptional circumstances’ that can be fixed. But do workers face hardship only as a consequence of ‘exceptional circumstances’? And, most of all: does it matter to them to be employed by large direct suppliers as opposed to by unauthorised subcontractors or small workshop owners?

Size does sometimes matter for labour standards, but the link between manufacturing capacity and working and living conditions is not an axiom. Our recent report on labour regimes in the Indian garment industry (Mezzadri and Srivastava, 2015), which explores industrial transformations and conditions of work in the metropolitan area of Delhi through a survey of more than 300 garment workers, challenges mainstream assumptions about labour standards. Our findings suggest that the rules of the game in the industry make labour standards effectively meaningless in factories and outside.

We found that tier-one factories perform better than subcontractors only in relation to social security provisions. But social contributions are not portable, which further reduces the gap between tier-one suppliers and subcontractors. If workers cannot move their social contributions when they shift employer, why should they care about anything except take-home wages, which are extraordinarily similar for workers in Panopticon-like factories and in informal establishments in commercial areas (around 6 000 to 7 000 Indian Rupees, about US$100). Workers themselves therefore participate in processes of labour informalisation. In particular, they circulate, not only between industrial and rural areas, but amongst industrial units. Overall, we found that more than 60% of the workers sampled had worked in garment units for less than one year. If wages are similar and social contributions inaccessible, who cares who the employer is?

‘Who is the garment workers’ employer?’ is itself a fascinating question. It is common knowledge that the garment industry in India, particularly in Delhi, relies heavily on labour contractors for recruitment. Contracting practices are considered the Achilles heel of labour standards, because they create a layer of intermediation between factories and workers. However, our findings indicate fairly complex recruitment patterns where intermediation and labour contracting take different forms.

Factories deploy external contractors for hiring, but they may also pay internal contractors to disguise their wage relation with workers. Direct hiring at factory gates is, by now, far more common than it used to be, because workers employed at factory gates can still be drawn into contracting networks. Again, findings indicated no substantial differences in wages between workers who were supposedly directly hired and contract workers. Contracting primarily performs a disciplining role, rather than saving labour costs.

Wage rates are similar for workers sweating in tiny workshops and home-based family micro-enterprises, at least when they are continuously employed, which admittedly is not necessarily the case. Since even family enterprises do not earn much more than garment labourers, they should also be seen as another class of labour. However individual homeworkers, mainly women, earn less than a third of other categories of informal sector workers in the industry. They are rarely able to make 2 000 Indian Rupees a month.

The many sizes of hard work and health depletion

The labour standards debate focuses on working conditions, but it should also consider living conditions. Our survey looked at social reproduction in industrial areas and beyond. Unsurprisingly, we found that the hardship of the garment-stitching working poor extends far beyond work time. However, we also found, counter-intuitively, that access to services may be far worse for workers employed in factories and housed in workers’ colonies than for workers employed in informal units, workshops or homes. Some industrial colonies, hamlets and informal dormitories are terribly unhealthy places, such as the infamous Kapashera, with piles of rubbish surrounding the filthy common toilets and cage-like rooms. Workers who are based in tiny workshops or homes in residential neighbourhoods may at least rely on local solidarity and resource pooling, which is generally not observed in industrial colonies.

This said, garment work is always an unhealthy experience (Mezzadri, 2015), across all the different venues – factories, workshops, homes – in which it takes place, although workers in different venues report different health issues. One third of workers in larger factories report back-pain, one fifth report allergies, and anecdotal evidence suggests waves of fainting during summer, a trend sadly known elsewhere on the garment-shop floor. Workers outside factories primarily report eyesight problems. Even in the absence of major disasters like Rana Plaza, workers are always exposed to waves of low-intensity epidemics, which will finally escort them out of the sweatshop, generally in their early thirties. We found that 58% of workers in factories are between the ages of 21 and 30, with fewer than 6% older than 40, in and outside factories.

So, through the eyes of workers, the limitations of labour standards hardly appear due to hidden subcontracting from tier-one factories to informal, unregistered units and homes. In fact, workers in all spaces of work face extraordinarily similar challenges: low wages, no access de facto to social contributions, unclear employer-employee relations, exposure to risks with inexorable health depletion, and ‘indecent’ living conditions incompatible with ‘decent’ work. These are the problems labour standards should address rather than reducing the debate to size, as if larger industrial establishments can always be assumed to be sounder places for workers.

Towards the end of voluntarism

Finally, just as the problems of the garment industry are hardly owing merely to hidden subcontracting, they are also hardly caused by a few culprits. If fast fashion companies may be seen as more problematic (because they trigger cycles of ‘economic bulimia’ where the speed of cycles or production, consumption and waste generation increase exponentially), poor labour standards nevertheless affect the entire industry, as the recent Rip Curl scandal confirms. While there may be better or worse buyers, better or worse factory owners, better or worse labour contractors and landlords of industrial hamlets, any piecemeal solutions can only fail, especially when based on the voluntary, private-based compliance regulations and interventions that have characterised the industry in the last four decades. It is time to put the age of business voluntarism to rest and retune our attention on multiple forms of institutional, binding regulations. In a new regulatory landscape, agreements like the Accord would become merely an initial step. New binding agreements would have to enlarge both their geographical scope and their concerns beyond factory-based health and safety to include wages, living conditions and, crucially, the right to organise.

Anner, M. and Bair, J. (2016) ‘The Bulk of the Iceberg: A Critique of the Stern Center’s Report on Worker Safety in Bangladesh’, Penn State Centre for Workers’Rights

This article was first published on the Global Labour Column.

Note: This post was earlier published on the SOAS Development Studies Blog