On February 4 and 5, 2016, SOAS South Asia Institute was thrilled to host director Gurvinder Singh and screen two of his films: Anhey Ghorhey Da Daan (Alms for the Blind Horse) and Chauthi Koot (The Fourth Direction). In this blog post, Navtej Purewal transcribes some of the post-film discussion between Gurvinder and Derek Malcolm, former Chief Film Critic of the Guardian and director of the London Film Festival, after the screening of Chauthi Koot which has recently won the Grand Prix at Belgrade Auteur Film Festival, the Best Asian Film at the Singapore International Film Festival and the Best Indian Film at the Mumbai Film Festival.

Gurvinder Singh studied filmmaking at the Film & Television Institute of India (FTII), Pune, graduating in 2001. He travelled extensively through Punjab between 2002 and 2006, living and wandering with folk itinerants, documenting folk ballads and oral narratives. He continued to make short experimental works and documenting arts/artists for the next few years. In 2005 he was invited by avant-garde Indian filmmaker Mani Kaul to be his teaching assistant for a masterclass at FTII, which led to a close association with the filmmaker who became his mentor. He translated and published a book of conversations with Mani Kaul, titled Uncloven Space. He directed his first fiction feature in Punjabi, Anhey Ghorhey Da Daan (Alms for the Blind Horse) in 2011. The film premiered in at the Venice Film Festival and screened at various festivals including Rotterdam, Busan, London, Munich, etc, besides releasing at the Museum of Modern Art (MoMA), New York. It won the ‘Special Jury Award’ at Abu Dhabi Film Festival, and the ‘Best Film’ at the International Film Festival of India, Goa, in 2012. It also won three National Awards in India, including ‘Best Direction’ and ‘Best Cinematography’. His second feature ‘Chauthi Koot’ (The Fourth Direction) recently premiered in ‘Un Certain Regard’ competition at the Cannes Film Festival, 2015. ‘Chauthi Koot’ has won the Grand Prix at Belgrade Auteur Film Festival, the Best Asian Film at the Singapore International Film Festival and the Best Indian Film at the Mumbai Film Festival.

Derek Malcolm was chief film critic of The Guardian for 35 years, during which time he directed the London Film Festival, was a Governor of the British Film Institute, and President of Fipresci, the international film critics association. He has visited India many times as a friend of Satyajit Ray, Shyam Benegal and Mrinal Sen, and is a regular at Indian Film Festivals. 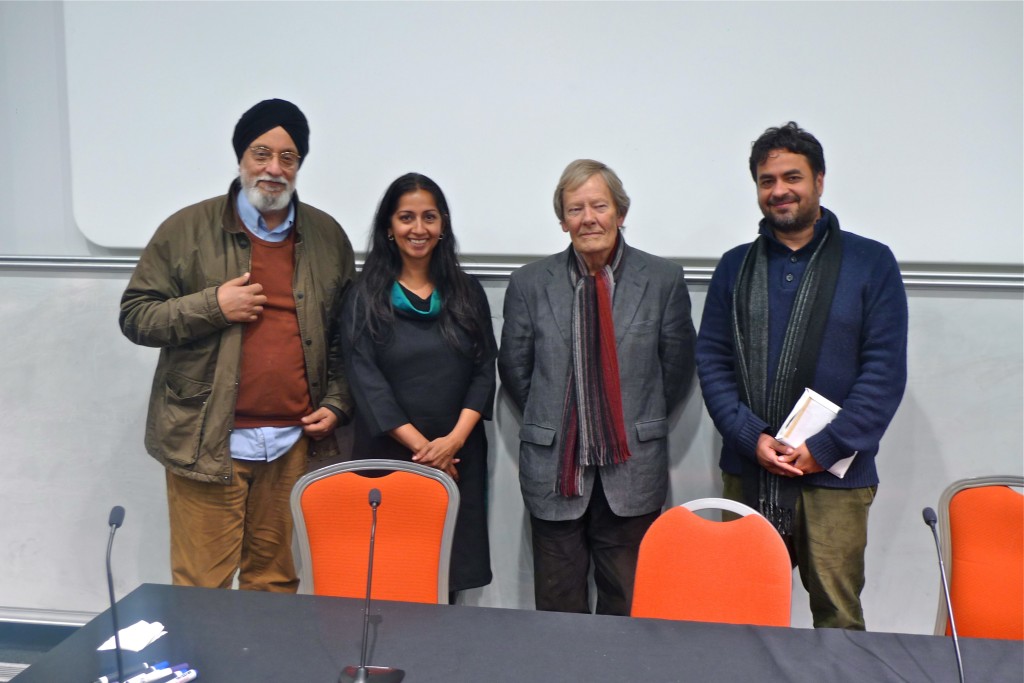 DM: Even though it’s very much deep in your own countryside, it seems to me that Chauthi Koot also has a universal theme which is really about how ordinary people are almost destroyed by radicalism on the one hand and the police and the military on the other.

GS: I think without consciously attempting that, it has become that. In India there is an extra-constitutionality of the state, on the one hand, and of agitated people who are not of the state, on the other. And for the film to work, it had to have that appeal beyond the events in which it was set. The events are in a way, a pretext to say something. In any cinema or art, a portrait event has to open up to a wider understanding or imagination.

DM: But it is very difficult in India to get good distribution of what would be called a good ‘art film’ (in contrast to Bollywood in India) which is almost impossible.

GS: Yes, that is what one is struggling with, fighting against, and still trying to make films. One doesn’t make films for immediate consumption. It’s not a product which has to be consumed immediately and be declared a ‘hit’ or ‘flop’ going by what it does at the box office. A film or any work of art has to speak for years to come. It is for the audience to discover. Like my first film, Alms for the Blind Horse, people are still discovering it. And because of Chauthi Koot, so many people are seeing that after seeing this one. Maybe with a third film, more people will watch the second film! So it’s like that. As a filmmaker I can’t be worried about it. I just have to go on making films and let the market forces play the role that they have to play. Eventually, the film will slowly reach an audience.

DM: Can you tell us about the title?

GS: The title is based on two stories, in fact. The Fourth Direction and Mai hun teek taak haan (transl ‘I am feeling fine now’) were written by the author Waryam Singh Sandhu. I never asked the writer what he meant by calling it The Fourth Direction… My interpretation is that it is a direction in which you don’t want to go but which you are forced to go. It’s being forced to take a direction against your own will.

DM: You say the film is from two stories. There are two parts to the film. Is that the same as the book?

GS: They are independent stories which are not connected in the book… of course, I could have made a film about just one of the stories. As a film it would have still worked. But I thought that both of these stories resonate against each other. Both are about fear, paranoia, and suspicion. One is more about the public space: the platform, the train. The other is about the secure space: the home. The public and the private are both under siege. So the film has one story inside another story. It’s like a box you open and you find another story inside of it. I thought both of the stories reflect similar ideas and enrich one another, rather than just being shown in isolation. But that was the risk I took. But that is also the joy in creating something. Until you’ve seen it finished, you don’t know what it will look like. But you have to go with your gut instinct that you know it will work.

DM: You have obviously been deeply influenced by Mani Kaul…

GS: When I went to the film school in Pune.. I had seen some Indian cinema like Satyajit Ray and the parallal cinema movement of Shyam Benegal and Mrinal Sen, but I didn’t know about Mani Kaul. And then I saw ‘Uski Roti’ at the Institute. I hadn’t seen anything like it.  He was somebody who had very Indian sensibilities yet was still also avant garde…This notion of an Indian avant garde, which I had thought didn’t exist, he represented that for me… Once I left the Institute, I had a chance to meet him in Delhi in 2005 for the first time. He was on the jury of a film festival. And a few days later after our meeting I got a call from him saying that he was going to be running a workshop at the film institute in Pune and asked if I would be willing to be his teaching assistant…I thought “this is a wonderful chance to be with him for two months”. That was where I felt my education as a filmmaker had reached some real meaning.

DM: How long was it from the time you left film school and making your first film?

GS: I had started making documentaries immediately. One thing I realized while I was in film school was that if I wanted to make a film, then I wanted to make something in Punjabi. In film school, we were watching cinema from all over the world… imbibing all of these influences, understanding more about world cultures, history, and societies around the world. And then I thought, “I’m from Punjab, but have I seen anything like that in Punjabi on the screen?”

So, there was a big vacuum. And then I said, “yes, I should be making films in Punjabi.” But I couldn’t even read Punjabi at that time because I had grown up in Delhi and hadn’t found the need to read Punjabi. So suddenly I began to think, “I am from Punjab, I am a Punjabi, I’m a Sikh, I can’t read Punjabi, so how am I supposed to make films in Punjabi?” So the first thing I did was to start to read Punjabi. That was the first thing and then to also go to spend time in Punjab. Luckily I got some grants to travel around Punjab to document folk ballads and that brought me in touch with issues of inequality and caste, which I addressed in the first film (Alms for the Blind Horse)… I hadn’t realized how strong the caste structure was in Punjab. We were told that Sikhism is all about equality and doesn’t believe in caste, and everyone is welcome in the gurdwara, etc. I was with balladeers who mostly came from the lower castes… So if it wasn’t for those 4-5 years I spent in Punjab, I wouldn’t be able to make films in Punjabi…if I hadn’t gone deep into understanding social, cultural dimensions of Punjab… and the language.

GS: Yes, I would like to. But for me Punjab now is more extensive. There is a Punjab in London, in Toronto… There are Punjabs everywhere. I’m currently exploring some ideas about Punjab which are away from the ‘homeland’.

More information about the films and screenings at SOAS can be found here:

Dr Navtej Purewal is Deputy Director of the South Asia Institute. She is a social scientist who refers to issues, debates and literature which cross both spatial and disciplinary boundaries. Her most recent areas of focus are in the sociology of religion and gender and culture in South Asia. However, she also has a regional interest in Punjab and continues to develop this specialism at SOAS through her teaching and research.