This article first appeared on the Development Studies at SOAS blog, on 6 December 2015. Please click here to view the original article.

Social science wisdom has long held that Indian elections are determined by ‘primoridial’ collective identities of caste, religion and region. Certainly, all political parties combine these elements in their election calculus, from the choice of candidate to election promises, campaign speeches and historical references which signal to the electorate who they primarily represent. But while these ‘traditional’ determinants of electoral success remain in play, they are increasingly insufficient explanations of Indian electoral outcomes. ‘Development’ has become the most salient of all electoral issues, and political contenders pose as ‘development men’, knocking down claims of their opponents to that title. 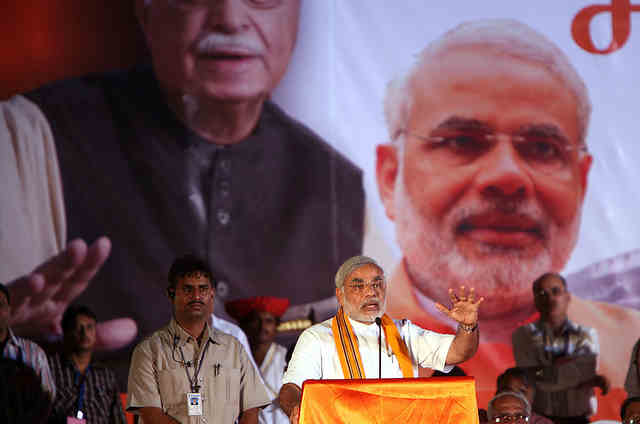 The original ‘development man’ of Indian electoral politics is arguably Chandrababu Naidu, the current Chief Minister of state of Andhra Pradesh, who gave himself this title more than a decade ago, when he was the poster-boy for the World Bank’s India agenda. YSR Reddy, the man who replaced him, ratcheted up the ‘development man’ rhetoric, criticizing Naidu’s failure on poverty reduction, and pledging to achieve that elusive goal, a ticket on which he won in 2004, and would have been re-elected had it not been for his death in a helicopter crash while campaigning for re-election in 2009.

Development became a truly national theme in the 2004 general elections. The BJP-led NDA alliance, having delivered five years of eye-catching growth rates, went confidently to the polls with the slogan of ‘India Shining’, but lost to the Congress-led UPA, whose campaign argued that growth had not benefitted India’s poor. The UPA maintained and bettered the NDA’s growth record, but after 2012-13 the growth rate fell to 5-6 per cent from the 10 per cent of the previous decade.

The UPA’s redistributive programs, such as the rural employment guarantee programme (or the MNREGA), received international acclaim, though they were a more qualified success in raising the incomes of the poor in some parts of the country. It added environmental and social conditions to processes of land acquisition for non-agricultural purposes, and granted rights to categories of the poor, such as those ‘below the poverty line’. The UPA also attempted to create a lasting political coalition by co-opting the stirrings for change coming from social movements and NGOs.

However, the UPA’s success also paved the way for its defeat in elections. Activists used the UPA’s right to information and rights discourses to show evidence of large-scale corruption and reverse government approvals for mining and industrial zones. Growth had also created a new aspirational middle class comprising those who had been its chief beneficiaries and wanted more of it, and did not accept the UPA’s argument that the slowdown was an outcome of the ‘global downturn’. For them, dropping growth rates raised questions over the UPA’s integrity and managerial capabilities, and the sustainability of ‘subsidies’ to the poor.

The 2014 general elections were thus explicitly fought on questions of development and growth: why had they stalled, how could they be accelerated and which party or leader was more capable of delivering them? Narendra Modi of the BJP convinced 31 per cent of voters, enough for a parliamentary majority, that ‘policy paralysis’ had caused the slowdown, resulting from the alleged corruption of the Gandhi family and other high profile UPA ministers. Modi argued that the UPA’s social programmes were cynical attempts to cultivate a ‘votebank’ of the poor, which, rather than improving their lives, locked them into poverty. The Planning Commission’s definition of the ‘poverty line’ received particular mockery.

Modi also campaigned as the leader of ‘the Gujarat model’, claiming that it was the best on offer for high employment and increased per capita income. In fact, while a high-performer on many development indices, Gujarat lags behind especially on social and environmental indicators. But all told, Modi forged an ambitious platform for accelerated growth and development, security and leadership, and presented it with eloquence, wit, and frequent religious and caste dog-whistles to the electorate.

While development gained salience, the ‘identity’-based electoral politics of traditional political science lore did not disappear. Rather, Modi combined the two. Citing his humble caste and class origins, he claimed to speak from the position of one who had overcome poverty. He courted particular castes and sub-castes by offering them tickets, and invoked historical and mythical figures associated with them.

Televised events with Muslim supporters, and his slogan of ‘India First’, attempted to move him beyond the cloud of the 2002 pogroms of Muslims during his time as Chief Minister of Gujarat (even as his campaign manager orchestrated and used incidents of Hindu-Muslim conflict to the BJP’s advantage). Modi also stoked regional identity where he could argue it had been slighted by the UPA’s policies, for example violence against people of North-eastern origin in Delhi, or putting a finger in the wound of perceived slights to regional heroes by the Gandhis.

These rhetorical strategies, aided by control over the media narrative and professional mobilisational tools, shook loose the UPA’s electoral base, making it possible for Modi to cobble together his 31 per cent. The UPA wilted in the face of Modi’s onslaught, without a narrative of its not-inconsiderable achievements, and lacking a leader to deliver it convincingly to the electorate.

Yet since he became Prime Minister in May 2014, Modi and the BJP have faced humiliating defeats in state-level elections. In Delhi, a new political outfit, the Aam Aadmi Party (AAP, The Common People’s Party) came to office after leveling corruption charges against the former administration, which, despite its stellar performance on many growth and development indicators, was all but wiped out in the 2014 state elections. The AAP formed a minority government after promising massively reduced utility bills, a clean and responsive government, and consultations at neighbourhood level on policy direction. It resigned after 49 days to protest central government interference in delivering its agenda, and went to the electorate for a fresh mandate, winning 67 of 70 seats (up from the 28 it previously held). This was despite the fact that Modi was BJP’s chief campaigner in Delhi.

In contrast with Modi’s grandiose promises of bullet trains and world leadership, the AAP’s vision of redistribution via subsidies, social programmes, transparency and participation in governance, plus zero tolerance on corruption, proved to have broader electoral appeal. This was helped by the stark contrast between the carrier of this message, Arvind Kejriwal, and Modi himself – with the former dressed down to physically resemble the common man, and the latter courting controversy over a very expensive suit.

The 2015 Bihar elections saw another battle between two different development models and social constituencies, mobilized by quite different leaders. Once again, Modi led the BJP campaign, but 18 months since coming to power, his platform of growth, development, security and leadership had begun to appear shaky. Armed with data, his detractors unpicked his claims of success: the falling Rupee, rising food prices, high crime rates in BJP states, increasing numbers of farmer suicides, cutbacks in social programmes, and attacks on minorities and rationalists. Modi suffered from a perceived gap between his claims and the data.

In contrast, Bihar’s incumbent Chief Minister (CM) Nitish Kumar had a convincing counternarrative: during his 10 years as CM, Bihar had enjoyed more than 10 per cent growth per annum, his innovative programmes had brought real benefits to rural areas, particularly to school girls and women, and road construction and electrification was underway at record speed. Nitish frequently used figures from government publications to contrast his and Modi’s leadership on these themes. He highlighted increased Hindu-Muslim tensions, sharp increases in food prices, low employment generation and drop in exports as evidence of the gap between Modi’s promises and his delivery on them. The Grand Alliance under Nitish, whose appeal lay mainly among middle and dalit castes, and across Hindus and Muslims, lay waste to Modi’s aspirations, winning a two-thirds majority in the assembly.

There are four reasons that electoral democracy in India today has now become a competition between different models of development. First, with the long-term decline of the Congress and the Left, their core voters are now up for grabs. Second, the increased power of states over their own development agenda allows for diversity of development models. Third, the fabled ‘primordial loyalties’ have been weakened by rapid growth and massive movements of populations. Finally, the penetration of media and social media have made it easy to access and disseminate development data and discourse.

Development and growth – their definition, measurement, speed and direction, along with the agency of the state and citizen, and the role and design of institutions – have thus become part of common political discourse in India. Performance and delivery, once evaluated primarily by international development agencies, NGOs and expert consultants, are now evaluated on the basis of felt, everyday experiences and in the realm of electoral politics. This has forced contenders to make development-oriented arguments for their support, and to recalibrate their appeals to identity. In states going to the polls in 2016-17, contenders have begun to recast themselves as new ‘development men’ and ‘women’ to rise above the politics of cultural identity, while thinking of new ways of making them compatible with each other.

Subir Sinha is Senior Lecturer in Institutions and Development in the SOAS Department of Development Studies.  His recent research has focused on decentralised development in India, early postcolonial planning, and on the global fishworkers’ movement. He Tweets at @PoMoGandhi.