“Attending the Kumbh Mela at Nasik: some reflections from a SOAS mahant” by James Mallinson

Home/Culture, General, India, Religion/“Attending the Kumbh Mela at Nasik: some reflections from a SOAS mahant” by James Mallinson

“Attending the Kumbh Mela at Nasik: some reflections from a SOAS mahant” by James Mallinson

I’ve just returned from the Kumbh Melā at Nasik, the first since that at Allahabad in February 2013 at which I was made a mahant (a cross between an abbot and a brigadier) of the Ramanandi religious order. The ceremony was recorded in the documentary film ‘West Meets East’, which finally got a UK airing on BBC4 on 9th September this year (available on the BBC iPlayer).

It was not until the end of 2013 that I was appointed lecturer in Sanskrit at SOAS, hence there being no mention of SOAS in the film — and a misleading reference to me as ‘an Oxford professor’ when in fact I was merely an unpaid research fellow at the Oxford Oriental Institute. The film (the making of which is worthy of its own documentary) was eventually part-financed by the Smithsonian HD Channel. Its US premier in Washington DC in November 2013 coincided with the opening of a wonderful exhibition at the Smithsonian Institution’s Sackler Gallery called Yoga: the Art of Transformation, for which I worked as a consultant and to whose catalogue I contributed various entries.

This synergy meant that the film was well publicised in the US and it was received warmly — apparently it was the Smithsonian Channel’s most popular download in 2014 — and the reviews here in the UK since its broadcast have also been very positive. This has been a great relief to me: I thought that the editors did an excellent job and the film shows the festival and its participants in the favourable light that they deserve, but in these days of instant internet offence (particularly rampant in India) one can never be sure. The film’s favourable reception underlines the vagaries of TV acquisitions here in the UK: why did it take two years for it to reach the screen?

My research work combines the sort of fieldwork portrayed in the film with close study of Sanskrit texts, many available only in manuscript form, in order to reconstruct the history of yoga. This approach has not been used before in yoga studies and has proved very effective. In particular, my understanding of the differences between the various yogi lineages of today has allowed me to untangle the different threads of yoga practice that we find in our textual sources. The success of my combination of methods has resulted in my being awarded a grant of €1.85m by the European Research Council to lead a five-year project on the history of physical yoga. I have an excellent team which includes two of the world’s foremost scholars of yoga’s history, Dr Mark Singleton and Dr Jason Birch, and an outstanding ethnographer of India’s ascetic traditions, Dr Daniela Bevilacqua. The project will produce a wealth of outputs, including critical editions and translations of ten key texts on haṭha yoga, four monographs drawing on ethnography and philology to chart physical yoga’s history, numerous articles, and various conferences, workshops and seminars at SOAS.

My fieldwork continues to throw up surprising insights. The variety of yoga practice which is the focus of the project is called haṭha and the reasons for this name have been obscured within the textual tradition. But it has become clear to me that haṭha in this context refers to the difficult practices of ascetics. One reason for coming to this conclusion was the way in which the word is used by today’s ascetics to describe extreme religious practices and austerities; this was confirmed to me last week in Nasik when, while walking to the second shāhī snān or “royal bath”, I saw a bizarre sign put up by the local authorities urging the crowd not to laugh at holy men who are “dreadlocked, haṭha yogis, naked etc.” (see image right) 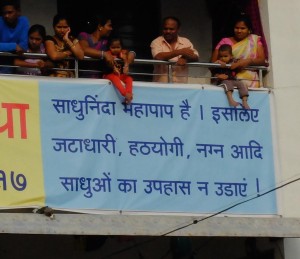 I’ve been busy with teaching at SOAS over the last couple of years and this was my first trip to India since early 2014, and so my first trip to the India of Prime Minister Modi. It seems that under his government the sādhu world is thriving. Everyone was very happy with the provision of facilities at the festival. Sādhu numbers are increasing fast — there were 600 new Rāmānandī mahants appointed at this Melā — and there was clearly plenty of money around. As a mahant I am entitled to a donation at any official ceremony within our order. At the last Melā the going rate was Rs 200; this time around it was Rs 500.

These gifts must be reciprocated: as a mahant it was also my duty to throw a bhaṇḍārā or feast for the sadhus of my immediate lineage — all 800 of them (see image left). 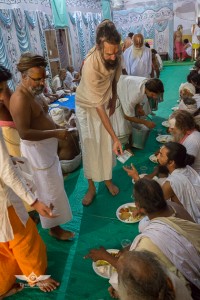 It was a fairly low-key affair. My status, despite my promotion, is still somewhat liminal as I am not a full-time ascetic, so I find it best to keep my head down. The appropriateness of this approach was confirmed to me when I heard that another somewhat liminal mahant, a hugely wealthy Nasik businessman who has taken over a temple previously administered by sādhus and effectively bought his appointment, caused a big furore when, at a feast for the sādhus of our order, he tried to sit on a raised platform with the sādhu mahants.

I sat on a raised platform only in my guru’s camp, and that was only when there were no other senior sādhus around and the monsoon floods had drenched my seat on the floor. The Nasik Kumbh Mela is the toughest of all because it is the only one to happen during the monsoon. On the final bathing day torrential rain sheeted down continuously for sixteen hours, flooding our camp for the third time. Many sādhus had been there for two months. It had been good, but it was time to leave. We shall all meet again at the next Kumbh Mela, which will be held at Ujjain in April 2016.

Dr. James Mallinson is a Lecturer in Sanskrit and Classical and Indian Studies at SOAS, University of London.