The NISU and SOAS South Asia Institute had organized an intimate gathering to glean the process of making a first-of-its-kind Hollywood film by Bollywood director Vidhu Vinod Chopra. The evening was made interesting with dance and song from Chopra’s films and an exclusive look at the theatrical trailer of Broken Horses. The trailer comes with Hollywood filmmaker James Cameron’s comment on the film: “Broken Horses is an artistic triumph. Beautifully written, acted and imaged, this film wraps slowly around you like a king snake and squeezes.” Following this impressive introduction, the audience got the chance to hear Chopra’s own experiences in Hollywood.

Chopra spoke to SOAS’s own Dr. Rachel Dwyer (professor on Indian Cinema at SOAS) about his Hollywood debut film Broken Horses (2015, dir. Vidhu Vinod Chopra): A film on which he worked with a Hollywood team and a film which he does not intend to dub in Hindi for his Indian audience. It was, he said, ‘to break prejudices’ that he made an English film. Chopra insisted that he only made films he believed in, and that owing to his being ‘ill-read’ all his film stories are his own. He also said that Indian filmmakers can make films like those made in Hollywood— without song and dance, they choose not to. The reason for this is because there is a particular way that filmmakers communicate with their audience, and in India, it is through song and dance. 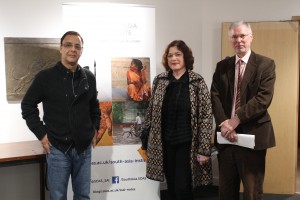 While sharing anecdotes and incidents related to the making of the film Broken Horses, Chopra explained that it was a while before he was taken seriously by the team he was working with, he also admitted that ‘Hollywood is very cold, but very efficient’ compared to the ‘warm and homely sets of Bollywood films’ which are invariably inefficient.

Answering Dr. Dwyer’s question about Broken Horses being an English remake of his older film Parinda (1989, dir. Vindhu Vinod Chopra), he said that this film was at most inspired from the older film, and that it was through and through a Hollywood film. He made it very clear that he has made this film to prove a point, which is— that Indian filmmakers too can make English films. On his journey from Bollywood to Hollywood he said that he gained recognition from the west due to the Oscar Nomination of his film Eklavya: The Royal Guard (2007, dir. Vindhu Vinod Chopra)—its appreciation in the west encouraged him to write Broken Horses. 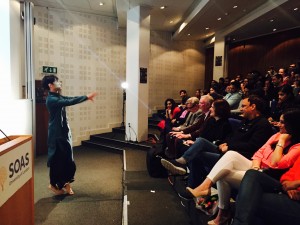 Commenting on his immense success in Bollywood, he said that he does not have a business sense and that he has only made movies that he believed in wothout caring for Box Office numbers or an agenda to make hit films. To him, their becoming blockbuster hits was purely coincidental. He recalled his casting of Sanjay Dutt in Munnabhai MBBS (2006 dir. Ranjkumar Hirani) as one of the examples of his lack of business sense. At a time when the Mumbai film industry had shunned him, Dutt played Munnabhai and the film was a phenomenal success, something that Chopra called a miracle.

Chopra also mentioned his famous musical film 1942 A Love Story (1994 dir. Vindhu Vinod Chopra), saying that he made the film due to his annoyance with the kind of film music being produced in the films of 1990s- ‘I made 1942 because then they were making terrible songs in films. I reacted against the idea of what sells. It makes me angry’.

On the difficulties of working on his new Hollywood venture he also said that ‘For Broken Horses he relied on his ‘visual sense’, which helped him to negotiate a terrain he was not used to and work with elements he knew— ‘air, water, earth, fire’. As he explained that Broken Horses is a story about familial and sibling love and about the futility of violence. Chopra pointed out that all his films were about love and they contained the message of spreading love and giving each other a ‘Jadu ki Jhappi’.

To answer a question in the Q & A round on whether he is a rebel, he said that ‘I have never followed the path that was there to be followed. I have allowed myself to wander and get lost. I am all over the place. I can do anything’. Finally, Chopra said, ‘I want you to be proud of this film.’ This is the first time an Indian has co-written, directed and produced a Hollywood film, and this session surely left its audience anticipating its release on the 10th of April. 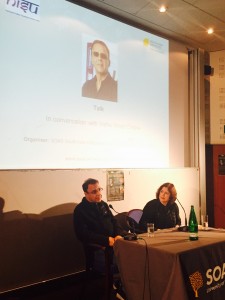 At a time when Bollywood has seen international acclaim and admiration, this new development and connection between two of the most popular film industries of the world is fascinating. While Chopra seems to stress the absence of song and dance as what differentiates this film from his other work, it was in fact the song and dance sequences that made Bollywood global (2008 Gopal and Moorti p.7) —song and dance sequences prompted travel to locations such as Switzerland and London. They also presented an image of India in its new, globalized form, becoming a major player on the world stage. As a film enthusiast and a student of Indian cinema, having studied Chopra’s films, this new turn in his career and in the industry is of great interest. Will perceptions of Indian filmmakers in the west, finally move beyond just Ray?