Amnesias and Remembrances of 1984: The Spins of Commemoration in the year of ‘lest we forget’ by Navtej Purewal

Home/Conflict, General, India, Politics, Religion/Amnesias and Remembrances of 1984: The Spins of Commemoration in the year of ‘lest we forget’ by Navtej Purewal

Amnesias and Remembrances of 1984: The Spins of Commemoration in the year of ‘lest we forget’ by Navtej Purewal 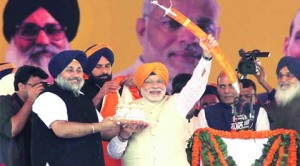 2014 has been a year of commemorations and remembrances of the events of 1984. June 2014 marked the 30th anniversary of Operation Blue Star, the code name for the Indian army storming of the Golden Temple in Amritsar. Operation Blue Star is also referred to as the second ghallughara (transl. carnage, holocaust).[1] November 2014 marked the 30th anniversary of the anti-Sikh pogroms which followed the assassination of Indira Gandhi who was shot at her residence by her two Sikh bodyguards. The pogroms occurred across India which saw the deaths of around 8000 Sikhs of which an estimated 3000 died in Delhi. This momentous year was followed by nearly two decades of state repression and heightened religious discord which have left a deep mark on contemporary India, the state of Punjab, and Punjabi and Sikh diasporas.

In the course of the ‘lest we forget’ commemorations, there are a number of amnesias which are worthy of note. The first is the construction of the supposed Hindu-Sikh divide in Punjab as an outcome of Indira Gandhi’s strategic manipulation which failed to focus upon the loss of collective belonging or identity, not least of ‘Hindu Punjabi’ and other identities of belonging to the region. The Sikh ownership of Punjab has been reified through the commemorative process. It needs to be remembered that Indira Gandhi’s utilisation of the anti-Nirankari movement by Jarnail Singh Bhindranwale and Babbar Khalsa led to fractures between Hindu and Sikh identities which were capitalised upon by the Congress in breaking down the opposing and competing Akali Dal’s Hindu-Sikh electorate. Most of the commemorative exercise in 2014 left little space to redress the wounds left by this political play by not challenging the symbolic ownership of the state and in not presenting fuller discussions around how this relates to a more critical analysis of the Indian state’s communal tactics of control.

The second amnesia relates to the rise of the Akali Dal in Punjab, which has come out of this fraught history, pandering to the dominant landed and business interests in the state. Interestingly, the Wikipedia entry for the Shrimoni Akali Dal categorises its political position as ‘right wing/far right’ and its ideology as ‘Sikh’. This is a depiction more seemingly suitable for  Bhindranwale. However, ‘lest we forget’ that Bhindranwale’s demands were not merely around religion either, despite the ‘fundamentalist’ overtures and characterisations. His appeal came from the peasantry and his followings not from business and large land owners, but from more marginal Sikh communities and smaller and struggling farmers. It seems the ‘fundamentalisms’ of Indian secularism and democracy came into sharp relief in Indira Gandhi’s dealings with the ‘Punjab crisis’. There was also an economic argument around regional autonomy, which the Congress of the 1970s was unwilling to concede to with the Anandpur Sahib Resolution of 1973. The current Chief Minister of Punjab, Prakash Singh Badal, and Deputy Chief Minister, son Sukhbir Singh Badal, have risen to power out of the aftermath of 1984, with Badal Senior having been a part of the Akali leadership since before the time of the Anandpur Sahib Resolution of 1973.

The Akali’s rise came out of the political vacuum created by the Indian state’s crushing of the Khalistan movement but also because of the neo-liberal context within which states in the Indian Union are now operating. This new context has seen large landowners convert their capital, assets and networks to make them into the new rulers of the land, in conjunction with traders and big business. The neo-liberal model has suited the Akalis in gaining from the decentralisations which have enabled them to amass further resources and to push an agenda for growth without social welfare. The road from Indian state repression against Sikh militancy to the contemporary Badal oligarchy of nepotism, cronyism and corruption under the aegis of neo-liberal economic growth in partnership with the BJP is the reality of the political and economic landscape of the Punjab of 2014. Despite the Akali’s being viewed as a party of Sikh assertion, its alliance with the BJP show that Hindu nationalism and Sikh regional assertion are the new shackles of post-1984 Punjab, which the May 2014 election so clearly highlighted.

The third amnesia underlies the anger surrounding the Delhi pogroms and how its focus has remained largely upon the then Congress government, with silences around the role of right wing Hindu organisations whose followings formed the mob street culture that took over parts of the city during the days following Indira Gandhi’s death. The demonization of the Congress has featured centrally within the remembrance exercise in a lost moment of critical dialogue around the relationship between Sikh electoral politics and the election of a new right wing BJP government under the leadership of Narendra Modi, whose record in Gujarat as Chief Minister after the anti-Muslim pogroms of 2002 had been likened to the Delhi pogroms. H.S. Phoolka’s outspoken stance on this in mobilising the Delhi Sikh voters towards the AAP away from the BJP, who had traditionally voted for the BJP against the Congress since 1984, showed a consciousness and understanding that the ‘Modi factor’ in Delhi could not be repackaged for Delhi Sikhs as had been done in Punjab by the Akali oligarchy. Interestingly, the Punjab pattern could be seen in the diaspora, where such connections were not merely forgotten but were reworked into mobilisations to lobby the British government to make an ‘Amritsar Inquiry’ about the recently released documents in January 2014 under the Public Records Act which showed direct communication between Indira Gandhi and Margaret Thatcher[2]. The records showed a correspondence in March 1984 in which Thatcher showed both willing and support for Operation Blue Star on behalf of the British government. The details of what this willing and support actually entailed are still unknown. However, what remains is a sense that no possibilities of justice remain when these amnesias surrounding 1984 continue to shape how this history is commemorated and remembered. 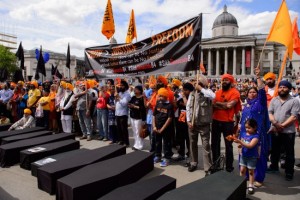 [1] The first ghallughara is remembered in Sikh history in 1762 when Ahmed Shah Durrani’s Afghan incursions resulted in attacks on gurdwaras and Sikhs in the battle for control of Punjab.

[2] Another piece by the author: ‘The Two Iron Ladies of 1984: Remembering the Postcoloniality of Operation Blue Star Thirty Years On’:  http://www.discoversociety.org/2014/06/03/the-two-iron-ladies-of-1984-remembering-the-postcoloniality-of-operation-blue-star-thirty-years-on/